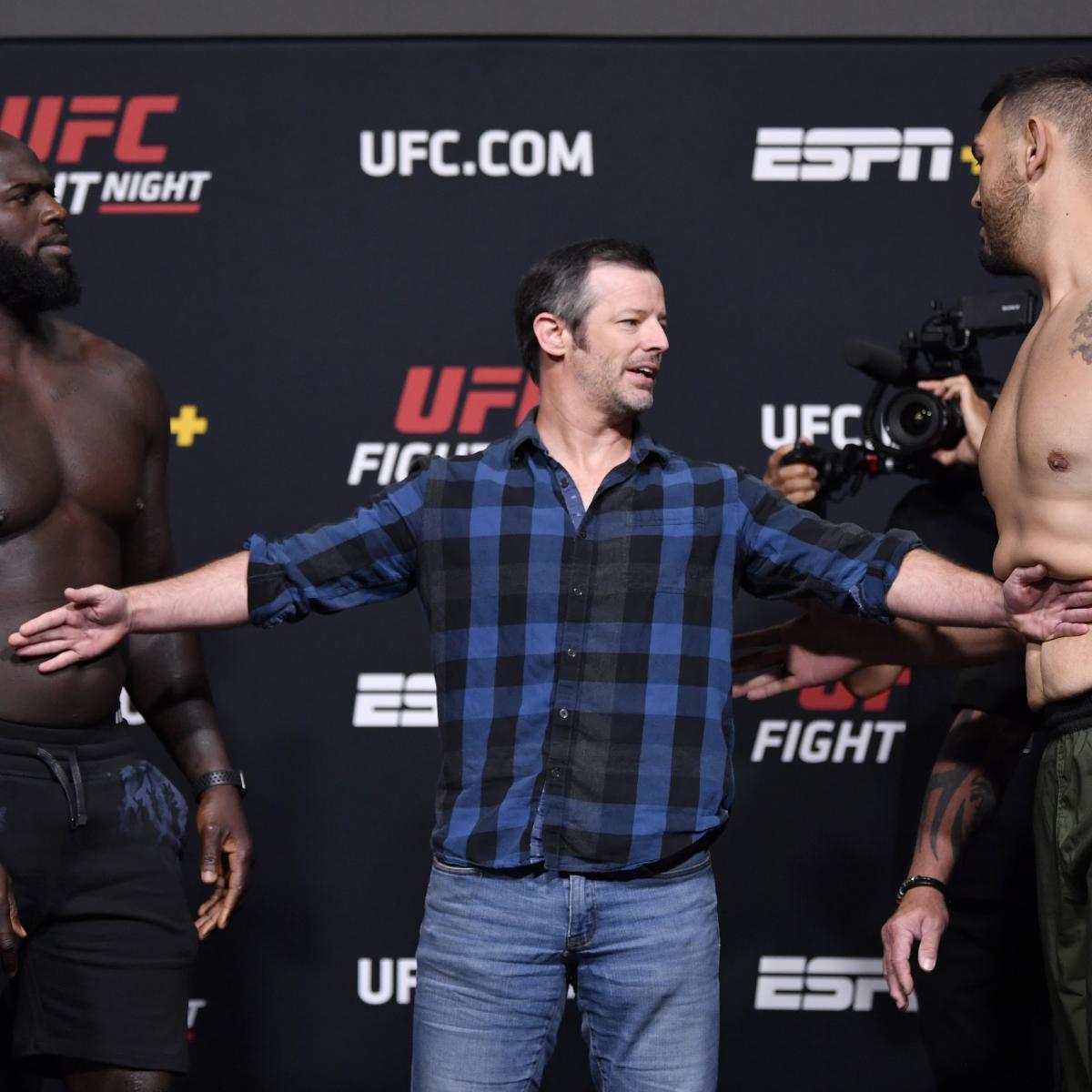 Heavyweights Jairzinho Rozenstruik and Augusto Sakai will have the opportunity to headline the latest offering from the UFC at the APEX Facility in Las Vegas on Saturday night.

Both fighters are looking to right the ship after losses. Rozenstruik has lost two of his last three. He followed up a knockout loss to champion Francis Ngannou with a win over Junior dos Santos before dropping a decision to Cyril Gane. Sakai hasn’t fought since losing to Alistair Overeem in September 2020.

It’s a double feature in the heavyweight division, with Walt Harris meeting Marcin Tybura in the co-main event.

Harris is looking to bounce back from back-to-back losses, while Tybura is on a four-fight win streak. His most recent appearance was a knockout win over Greg Hardy that earned him Performance of the Night.

Here’s a look at the complete card with the latest odds and a preview of the biggest fights on the card.

These fighters should be feeling pressure to win, since both are coming into the fight with losses and both have things they need to improve on with regard to their styles.

For Rozenstruik, it’s a sense of urgency in the cage. Bigi Boy is capable of putting opponents to sleep with one strike, but he oftentimes spends entire rounds just waiting for that one shot to come up. He was much too passive to beat Gane in a five-round fight and was fortunate that Overeem left an opening in the fifth round that led to a knockout win instead of another decision loss.

Sakai, on the other hand, could stand to be a bit more measured. He has knockouts on his resume but isn’t a traditional power puncher in the heavyweight sense. Instead, he relies on volume to wear down opponents.

That’s worked fine, but it also a tough game to play in the heavyweight division. Eventually, he’ll get caught by the tougher, more powerful heavyweights as he was against Overeem.

Ultimately, Sakai’s busy game plan will play into Rozenstruik’s strengths, giving him several opportunities to counter him and not allowing him to get complacent.

This is a case of two fighters heading on opposite trajectories. Harris has struggled to get anything going of late with losses to Overeem and Alexander Volkov. Meanwhile, Tybura has put together a winning streak that includes Greg Hardy and Ben Rothwell.

To be fair, Overeem and Volkov are both better strikers than Hardy and Rothwell. It’s hard to say how Tybura would fare against the same opponents. What is fair to say is that Tybura should have added confidence given his recent performances.

If Harris is going to win, he’ll need to do so early. Each of his last five wins have come in the first two rounds, and he is traditionally a fast starter. However, his takedown defense will need to be spot-on. Tybura’s ground game is better than Harris’, and the longer he has to fight, the more tired he is going to get.

Tybura isn’t immune to the knockout. He’s had the lights turned out four times in his career with the last time coming against Sakai. Again, he isn’t the biggest striker. So it’s not out of the realm of possibility that Harris gets the win.

However, the more likely result is Tybura utilizing the first round to spam takedowns, forcing Harris to use his early energy on the defensive before opening up in the second and third rounds.

If there’s anyone on this main card who could get into the championship picture it’s Santiago Ponzinibbio. That’s where he left off in 2018 when a series of injuries and bad breaks kept him out of the cage for nearly two-and-a-half years.

The biggest question is what he has left in the tank. In 2018, the Argentinian had racked up seven wins in a row, including a destruction of Neil Magny and a good win over Gunnar Nelson. That version of Ponzinibbio was a no-show in his January return to the Octagon against Li Jingliang.

Ponzinibbio is not young or inexperienced. At 34 years old with 31 career fights, there’s no guarantee he ever gets back to that form, and that’s where the intrigue is in this fight.

Miguel Baeza is an up-and-comer in contrast to his opponent. The 28-year-old is 10-0 but is still in the stage of his career where every fight is a step up in competition. This one is no different, as his last win came against Takashi Sato.

The tight odds are indicative of how close these two are on paper. It really comes down to what version of Ponzinibbio shows up. Perhaps with a return fight now under his belt, he will be more prepared to get back to his prime.

Loading...
Denial of responsibility! NewsUpdate is an automatic aggregator around the global media. All the content are available free on Internet. We have just arranged it in one platform for educational purpose only. In each content, the hyperlink to the primary source is specified. All trademarks belong to their rightful owners, all materials to their authors. If you are the owner of the content and do not want us to publish your materials on our website, please contact us by email – [email protected]. The content will be deleted within 24 hours.
Loading...
best sports newsnews update sportsnewsupdateoddsPredictionsRozenstruikSakaischedule

Column: Kawhi Leonard’s virtuoso game must be just the start for Clippers

I did not take any stimulant but was on painkillers:…