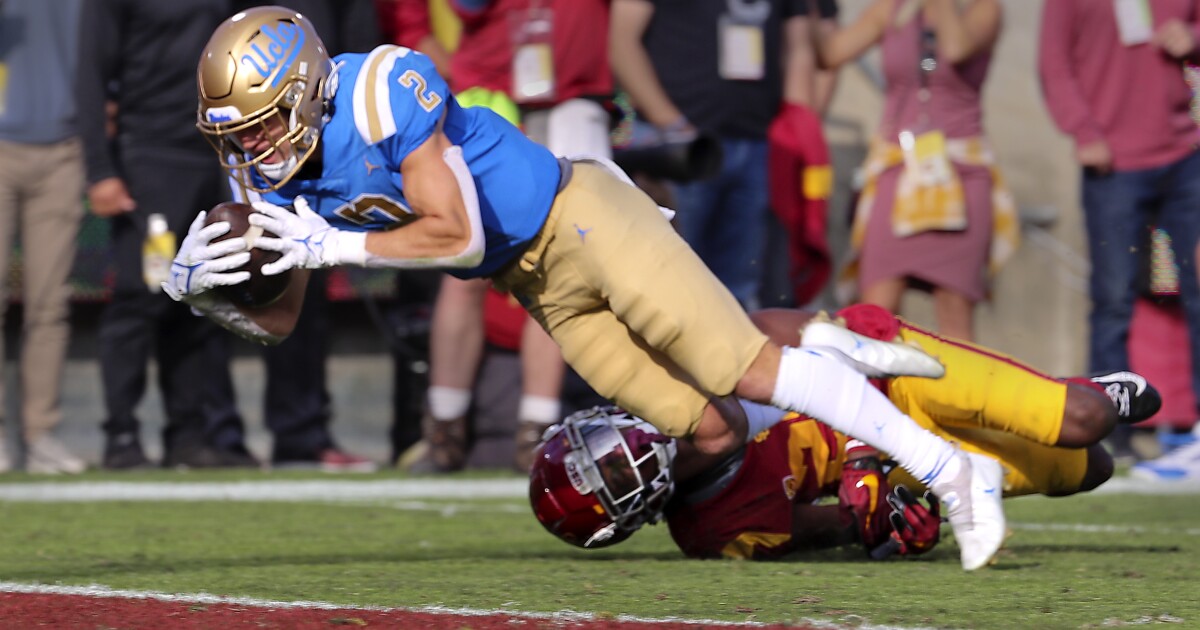 Kyle Philips, UCLA’s leading wide receiver last season and possibly pound for pound the toughest player on the team, announced Tuesday that he will declare for the NFL draft.

“Thank you to my teammates for the best four years of my life,” tweeted the 5-foot-11, 191-pound Philips, who finished last season with 59 catches for 739 yards and 10 touchdowns despite missing one game for unspecified reasons. “It might not have ended how we would have liked but I am walking away grateful and with a full heart.”

A sure-handed receiver who ran precise routes and was selected first team All-Pac-12 as a redshirt junior, Philips became quarterback Dorian Thompson-Robinson’s favorite target over their four seasons together.

Philips’ 67.2 yards receiving per game last season ranked second in the Pac-12, trailing only Washington State receiver Calvin Jackson Jr.’s 75.9 yards (among eligible players). Philips also scored a touchdown on a punt return last season, his average of 22.6 yards per return leading the conference among players who returned more than one punt.

Philips finished his career fourth on UCLA’s career list with 163 catches. He had two seasons of remaining eligibility after playing in only four games during his first season in the program because of a concussion.

Philips becomes the second Bruin with remaining eligibility to announce his intentions to turn pro, joining defensive lineman Otito Ogbonnia. Defensive linemen Martin Andrus Jr. and Tyler Manoa have said they will return for the 2022 season and the team is waiting on a slew of other players to make their announcements.

Denial of responsibility! NewsUpdate is an automatic aggregator around the global media. All the content are available free on Internet. We have just arranged it in one platform for educational purpose only. In each content, the hyperlink to the primary source is specified. All trademarks belong to their rightful owners, all materials to their authors. If you are the owner of the content and do not want us to publish your materials on our website, please contact us by email – [email protected]. The content will be deleted within 24 hours.
aimsbest sports newsbigdeclaringDraftKylenews update sportsnewsupdate

BCCI postpones Ranji Trophy and other tournaments due to COVID-19