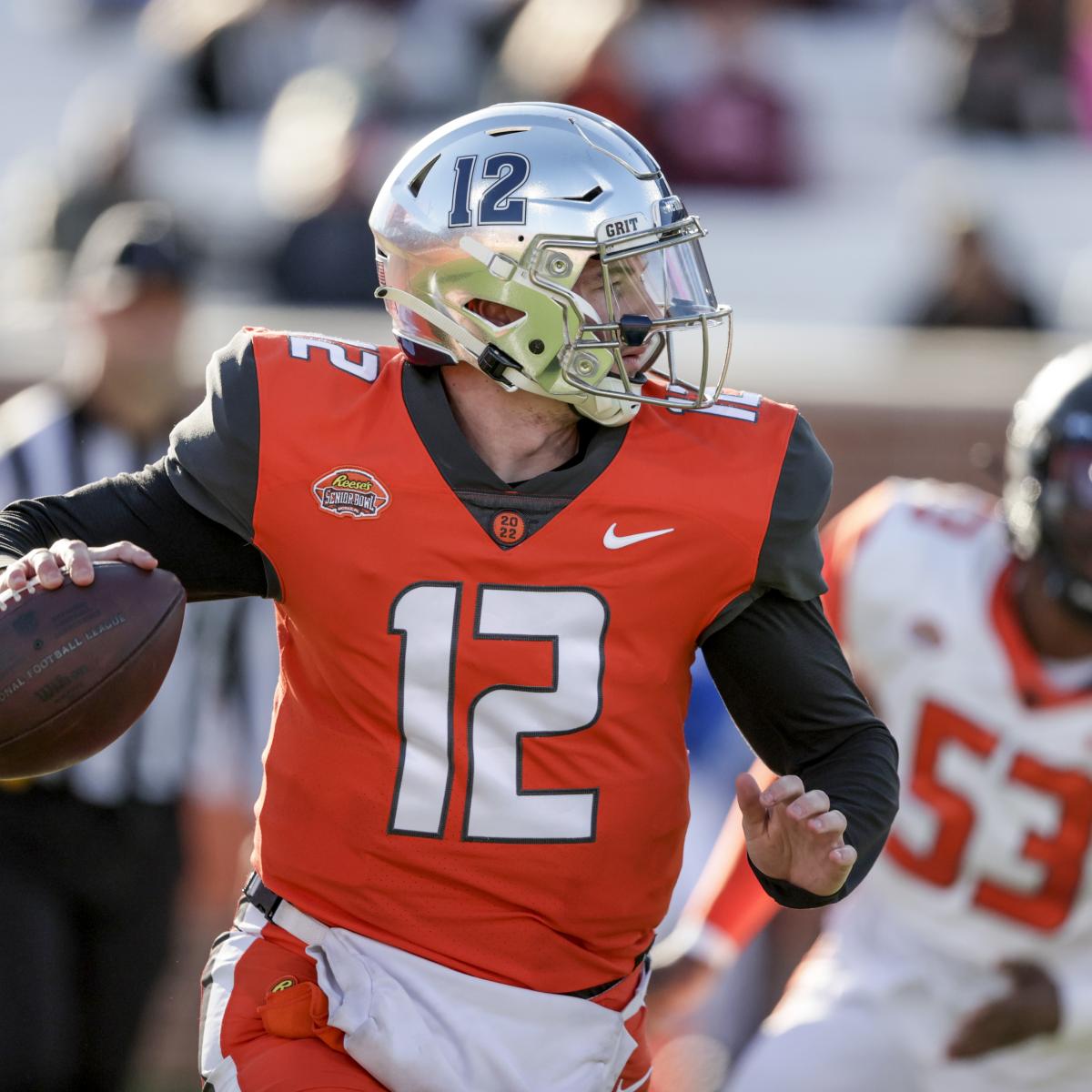 The NFL draft may be over, but roster construction is not. With 90 roster spots available for training camp and a target of 53 for the start of next season, front offices didn’t stop working after this weekend’s seven rounds.

Following the final pick of the 2022 draft, the free-agent pool deepened with undrafted players hitting the open market. While those names may not tickle the fancy of the average fan, history has regularly proved that there are diamonds in the undrafted rough.

In 1994, two-time MVP and legendary gunslinger Kurt Warner slipped through the cracks. More recently, James Robinson fell into the Jacksonville Jaguars’ laps in 2020—before giving them 10 scrimmage touchdowns and 1,300-plus scrimmage yards as a rookie.

None of this year’s undrafted players can be comfortably projected to match those impacts, but some are already getting scooped up. Here’s the latest surrounding three of the top prospects across positions: Carson Strong, Obinna Eze and Braylon Sanders.

Strong was one of college football’s best signal-callers these past two seasons. In 21 games since 2019, he racked up over 7,000 yards with a 70.1 percent completion rate, to go along with 63 touchdowns and just 12 interceptions.

Considering the eye test and the statistics, the Nevada quarterback would have been an easy selection during the draft. Unfortunately, teams appeared put off by his history of knee injuries (centered around osteochondritis dissecans) and multiple related surgeries.

According to NFL Network‘s Tom Pelissero, though, the Philadelphia Eagles are picking Strong up. Further, they’re apparently giving him one of the best contracts an undrafted free agent has ever received—with $300,000 guaranteed. If he can stay healthy, the rookie should be able to put some pressure on the inconsistent starter, Jalen Hurts.

While the Eagles seem to be bringing on some quarterback competition with their UDFA, the Detroit Lions are working to make their QB’s life easier. After taking a wide receiver and tight end in the first five rounds, the Fort Worth Star-Telegram‘s Drew Davidson reports that they’re signing TCU tackle Obinna Eze as well.

At 6’6″, 321 pounds, the big man certainly looks the part of an offensive lineman, but there were concerns about his ability to handle refined rushers.

Having originally moved to the United States of America from Nigeria to play basketball, Eze didn’t start playing varsity football until his senior year of high school. He picked things up quickly enough to play at Memphis and then start as TCU’s left tackle last season, but his technique may still require some tuning. With Taylor Decker and Penei Sewell sitting atop the depth chart, Eze won’t be expected to contribute immediately but should have a chance to bring the team needed depth.

Few rookies are exciting as wide receivers, as the position lends itself to glorious highlights at the college level. Ole Miss wideout Braylon Sanders most certainly fits that bill, having been communally nominated for the best catch of 2021 thanks to an outrageous one-handed grab against Alabama.

The 6’0″ receiver wasn’t unbelievably productive for Ole Miss, but he did hit 549 receiving yards and four touchdowns this season. Despite that relative lack of production, though, the Miami Dolphins seem to have seen enough—as Sun Sentinel‘s David Furones reports they’re bringing Sanders on as a UDFA.

Locking in for next season, Miami has been focused on Tua Tagovailoa’s pass-catchers this offseason. With Jaylen Waddle breaking out, the Dolphins also brought on Tyreek Hill, Cedrick Wilson and, during the draft, Texas Tech’s Erik Ezukanma in the fourth round. It’ll be a crowded room for Sanders to carve out a role in, but iron does sharpen iron.

Denial of responsibility! NewsUpdate is an automatic aggregator around the global media. All the content are available free on Internet. We have just arranged it in one platform for educational purpose only. In each content, the hyperlink to the primary source is specified. All trademarks belong to their rightful owners, all materials to their authors. If you are the owner of the content and do not want us to publish your materials on our website, please contact us by email – [email protected]. The content will be deleted within 24 hours.
Agentsbest sports newsfreeLatestnews update sportsnewsupdateProspectsrumors

2022 NFL Draft Grades for Every Team

Batista’s 8 Best Matches, Moments That Made Him a WWE…