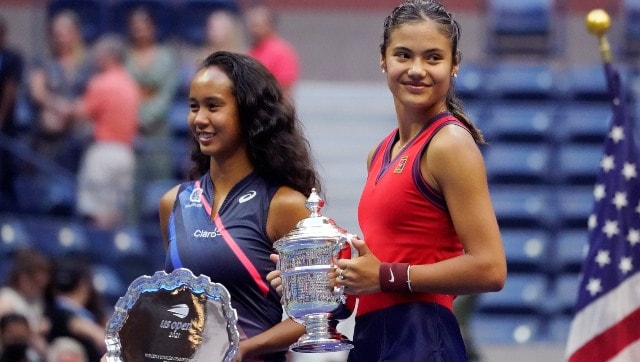 There were plenty of moments to be overwhelmed for teenagers Raducanu and Fernandez. The packed stadium. The loud crowd. Presence of the Original 9. Former champions in attendance. But arguably, above all, the occasion.

In front of 23,000 people, an 18-year-old girl from south London, with no experience of playing at this level, had her fairytale moment in New York. On Arthur Ashe Stadium, largest tennis venue world in the world, Emma Raducanu clinched the US Open title for her first trophy and pocketed $2.5 million.

Her journey at Billie Jean King Tennis Center began 17 days ago with a first round in qualifying. A mini tournament where players are typically required to win three matches in order to make the main competition draw. It culminated on Saturday with Raducanu becoming the first British female to win a Grand Slam since 1977. For the cherry on top, Raducanu went throughout the tournament without dropping a set. 20 sets played, 20 sets won.

The achievement is one to instill belief and inspire countless others. Never has a qualifier, male or female, won a Grand Slam title.

Raducanu’s title triumph set forth multiple records. Making her US Open debut, the Briton is the first woman to become a major champion after fewer than four appearances. She is also the youngest female Grand Slam winner since 17-year-old Maria Sharapova at Wimbledon in 2004.

It was the first all-teenager Grand Slam final since the 1999 US Open. A first Grand Slam final featuring two unseeded players. Playing Canada’s Leylah Fernandez, Raducanu won 6-4, 6-3 in an hour and 51 minutes in a match that had multiple jaw-dropping moments. There are multiple adjectives that can be extended to Raducanu, and Fernandez given the superlative show they put together. But one that stands out from Saturday, and possibly the entire fortnight, is composure.

There were plenty of moments to be overwhelmed for both women. The packed stadium. The loud crowd. Presence of the Original 9 at the coin toss. Many former champions — Kim Clijsters, Andy Roddick, Stan Smith, Virginia Wade, Billie Jean King — were in attendance. But arguably, above all, the occasion.

Both have played in front of packed stadiums at Flushing Meadows helped significantly by virtue of their opponent. Fernandez faced Naomi Osaka, Angelique Kerber, Elina Svitolina and Aryna Sabalenka in her four recent matches. Raducanu, meanwhile, didn’t face the star cast of ‘WTA Avengers’ but impressed — and shocked — many with her attacking tennis and dominance.

🇬🇧 @EmmaRaducanu did a thing.

On the penultimate day of the US Open, a vociferous crowd backed Fernandez from the word go but not without lauding Raducanu’s tennis as well. There were seemingly no nerves from either player with both off the blocks quickly. A deep backhand return gave Raducanu a break in the second game.

The break was handed right back after another lengthy game with both women brutally assaulting the tennis balls from the back of the court. Raducanu and Fernandez survived challenges to their serve as points and games continued to go the distance.

Raducanu took the first set 6-4 in 58 minutes after a shaky Fernandez serve effort. A blistering forehand winner gave Raducanu the set and she urged the crowd to up the decibel level — a level many hadn’t expected was possible.

In the second set, Fernandez held serve from 0-40 down and put the pressure on Raducanu’s serve in the next for a possible turning point. Whatever chances of it being the moment that changed the match were quickly brushed aside. Raducanu broke right back to keep the set at an even footing.

A stunning forehand pass gave Raducanu the break to go 4-2 up and she consolidated it without much fuss. Serving to stay in the match, Fernandez saved two match points to put the onus on the Briton to get the job done.

Admirably, and true to her characteristics at this US Open, Fernandez kept the fifth alive by creating a break point. However, this produced a moment of debate as Raducanu scraped her knee while sliding and needed medical attention for a bloody knee. The 19-year-old Canadian expressed her displeasure for the mid-game stoppage but it emerged that it was within the rules to stop play. Raducanu witnessed Fernandez’s frustration but was not overawed by it as she got up and saved break points before closing the match out with an ace.

It has been a remarkable couple of months for Raducanu. It needed a U-turn from All England Club (AELTC) to hand her a wildcard for Wimbledon. On grass, she impressed with a fourth-round finish. But it came with its own set of challenges: probing questions over her mental toughness as she retired mid-way into the match. Thereafter, she prioritised more matches over bigger matches as appearances in ITF and Challenger events would highlight. Coming into New York, she was required to come through qualifying to play in the main draw. One by one she cruised past opponents without dropping a set. And that remained the case until the very end.

Playing just her second major, Raducanu didn’t have a single love hold service game. She saved seven of nine break points. More significantly, she never lost her cool as break points created by her came and went. From 18 break point opportunities, Emma converted just four. As far as daunting moments go, none could get bigger than serving for the Championship and the opponent holding break points. If that wasn’t enough to weaken one’s knees, there was also the momentum of an upset opponent.

Leylah asking for the mic back to acknowledge 9/11 was one of the classiest, most empathetic, and mature things I’ve ever seen in a post game moment ……… and she’s only 19. I’m blown away

There was plenty of composure in the on-court interview, too. Raducanu, already well trained for public appearances, thanked the crowd, the opponent, and members of British tennis. The most poignant moment came when Fernandez sought to speak to the New Yorkers for displaying their resilience on the 20th anniversary of the 11 September attacks.

These two, stars of tomorrow, are not planning on this appearance being their legacy in tennis. Fernandez stated she will go for the “better trophy” in the future. For Raducanu, Tim Henman said, “This is no flash in the pan, she’ll win more of these.” Based on early impression, they are here to stay.

Denial of responsibility! NewsUpdate is an automatic aggregator around the global media. All the content are available free on Internet. We have just arranged it in one platform for educational purpose only. In each content, the hyperlink to the primary source is specified. All trademarks belong to their rightful owners, all materials to their authors. If you are the owner of the content and do not want us to publish your materials on our website, please contact us by email – [email protected]. The content will be deleted within 24 hours.
Loading...
best sports newscomposuredisplayEmmaFernandezFirstpostLeylahNews

How to Set Google Search to Dark Mode