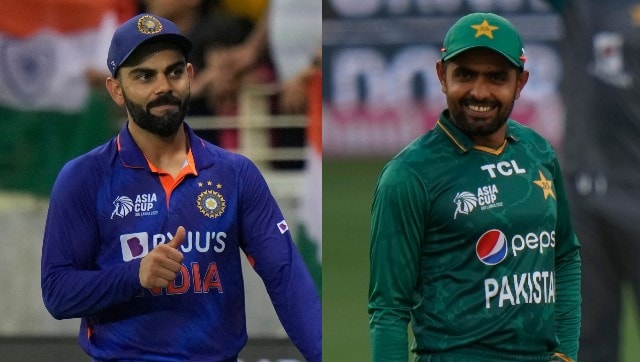 Pakistan head coach Saqlain Mushtaq had his say on the Virat Kohli-Babar Azam debate saying that the Indian batter is very dear to him.

There has been a long-standing debate in cricket regarding who is a better batter between former India skipper Virat Kohli and Pakistan captain Babar Azam and almost every cricket fan has his/her opinion on the same, which is quite evident on social media.

Notably, Kohli has arguably been the best batter the world has seen in recent times. The star cricketer, who was once called the ‘run machine’ made and broke numerous batting records. However, Kohli was not at his best in the last couple of years, but he bounced back to form with a brilliant show in the Asia Cup 2022 as he scored two fifty-plus scores and an unbeaten century.

Meanwhile, Azam has been hitting centuries at his will and is on a record-breaking spree. Babar has become the go-to player of the Green Army in recent years. However, the Pakistan opener has witnessed a sudden loss in form as he has produced a below-par show so far in the ongoing Asia Cup scoring just 63 runs in five matches.

In the meantime, former Pakistan cricketer and current head coach Saqlain Mushtaq gave his verdict on the two batters while speaking to Sportskeeda Cricket. When he was asked to name his pick, he chose Babar but said Kohli is dear to him.

“Definitely Babar kahunga… but Virat mere dil ke bohot karib hai (I will definitely pick Babar, but Virat is close to my heart)” he said.

Recently, Sri Lanka legend Sanath Jayasuriya was also asked to pick between the India and Pakistan stars and the former batter legend chose Kohli and said that he is his and his son’s favourite player.

It is worth noting that, Kohli ended the Asia Cup with 276 runs in five innings and a strike rate of 147.59. He was the tournament’s leading run-scorer after scoring an unbeaten 122 against Afghanistan, 64 runs ahead of second-placed Mohammad Rizwan.

Denial of responsibility! NewsUpdate is an automatic aggregator around the global media. All the content are available free on Internet. We have just arranged it in one platform for educational purpose only. In each content, the hyperlink to the primary source is specified. All trademarks belong to their rightful owners, all materials to their authors. If you are the owner of the content and do not want us to publish your materials on our website, please contact us by email – [email protected]. The content will be deleted within 24 hours.
best sports newsbohotCoachdebateDilFirstcricketFirstposthai