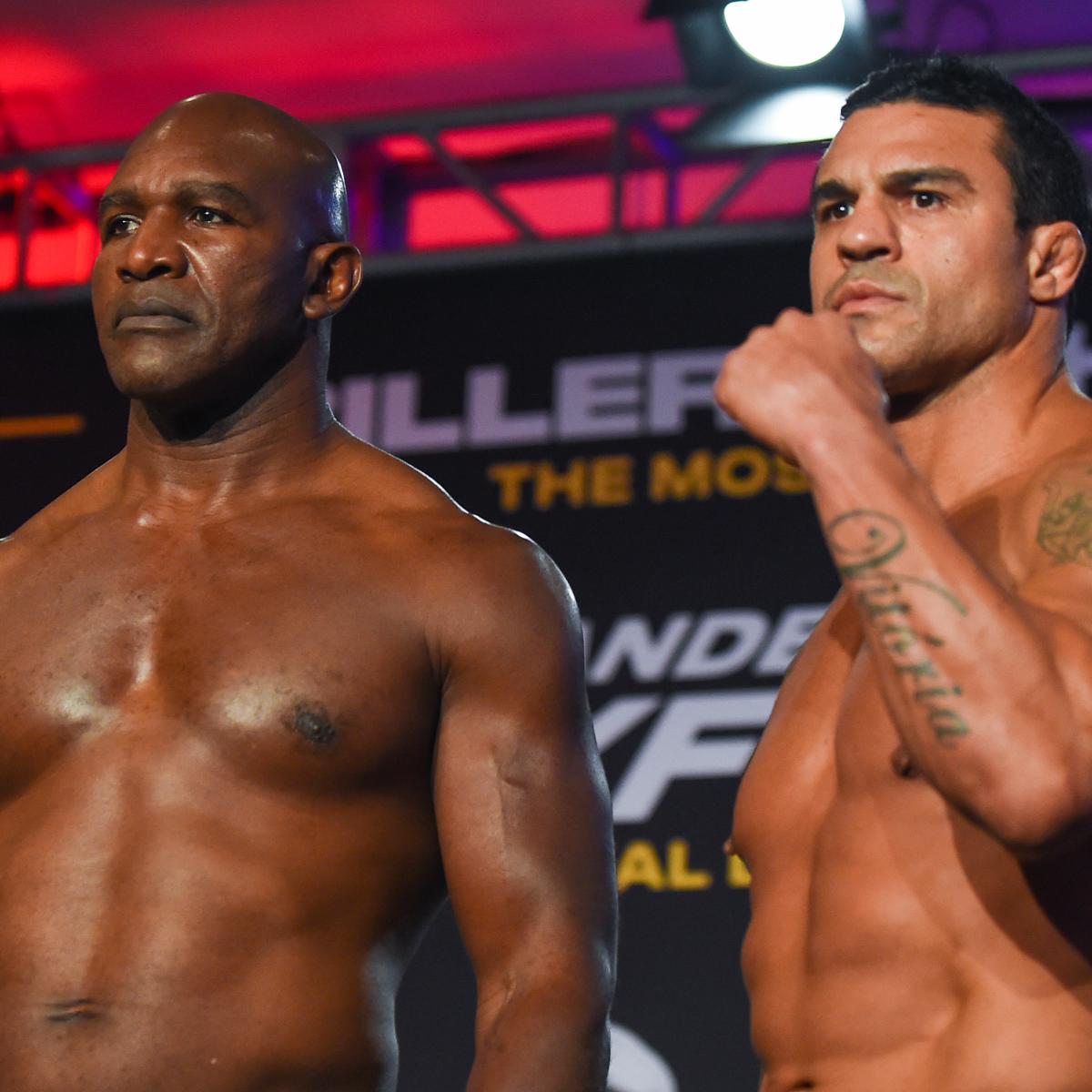 Former UFC superstar Vitor Belfort made quick work of boxing legend Evander Holyfield in the main event of Triller’s Fight Club Legends 2 on Saturday night. Belfort scored a knockdown in the first round and then landed a string of punches as soon as the count was over, forcing the referee to stop the fight and hand him a win in a high-profile exhibition match.

Here’s a look at how the fight ended, via FITE TV:

IT IS ALL OVER! @vitorbelfort STOPS EVANDER IN THE FIRST!!!

Sporting News’ Andreas Hale and Yahoo Sports’ Kevin Iole felt that the event should not have taken place considering Holyfield is 58 years old:

Holyfield was a late replacement for Oscar De La Hoya, who had to pull out of the bout after he was hospitalized with COVID-19.

Holyfield’s involvement led to Triller moving the fight from California to Hollywood, Florida, in the hopes of getting the main event sanctioned as a professional bout. While the Florida Athletic Commission did say it would approve the fight, boxing journalist Dan Rafael reported Friday that the fighters’ contracts stated it would be an exhibition match. The bout was not listed on BoxRec as of Saturday night.

It was clear Holyfield wasn’t in the right shape to take on a fighter in Belfort, who is 14 years younger. After a minute of feeling each other out and a slip near the ropes from Holyfield, Belfort rocked the former heavyweight champion with a combination and sent him tumbling to the canvas.

Holyfield bounced right up, but he didn’t put up any fight. Belfort came after him with a barrage of punches and didn’t see any return fire from his opponent. The referee had seen enough and waved off the fight.

According to TalkSport’s Michael Benson, Holyfield felt he should have been allowed to continue:

Evander Holyfield immediately after his defeat to Vitor Belfort: “I’m not hurt. It’s kinda sad. It is what it is. I think it was a bad call, I think the referee shouldn’t have stopped the fight that quick.”

Belfort, 44, called out Jake Paul in his post-fight comments, per Hale:

Vitor Belfort challenges Jake Paul to a $25 million fight where the winner takes all on Triller.

Belfort got the win, but he didn’t have to do much to earn it. He will be facing an uphill battle trying to land a fight against Paul, who can be very selective with who he fights next after beating Tyron Woodley in August.

There had been chatter of an exhibition between Holyfield and Mike Tyson, who returned to the ring in an exhibition match against Roy Jones Jr. in November. But after Saturday’s showing, there may no longer be an appetite for the two icons to go at it considering their age and the risks involved.

Loading...
Denial of responsibility! NewsUpdate is an automatic aggregator around the global media. All the content are available free on Internet. We have just arranged it in one platform for educational purpose only. In each content, the hyperlink to the primary source is specified. All trademarks belong to their rightful owners, all materials to their authors. If you are the owner of the content and do not want us to publish your materials on our website, please contact us by email – [email protected]. The content will be deleted within 24 hours.
Loading...
1stRoundbeatsBelfortbest sports newsEvanderFightHolyfieldnews update sports

No Ronaldo, no wins for Juventus after 2-1 loss at Napoli