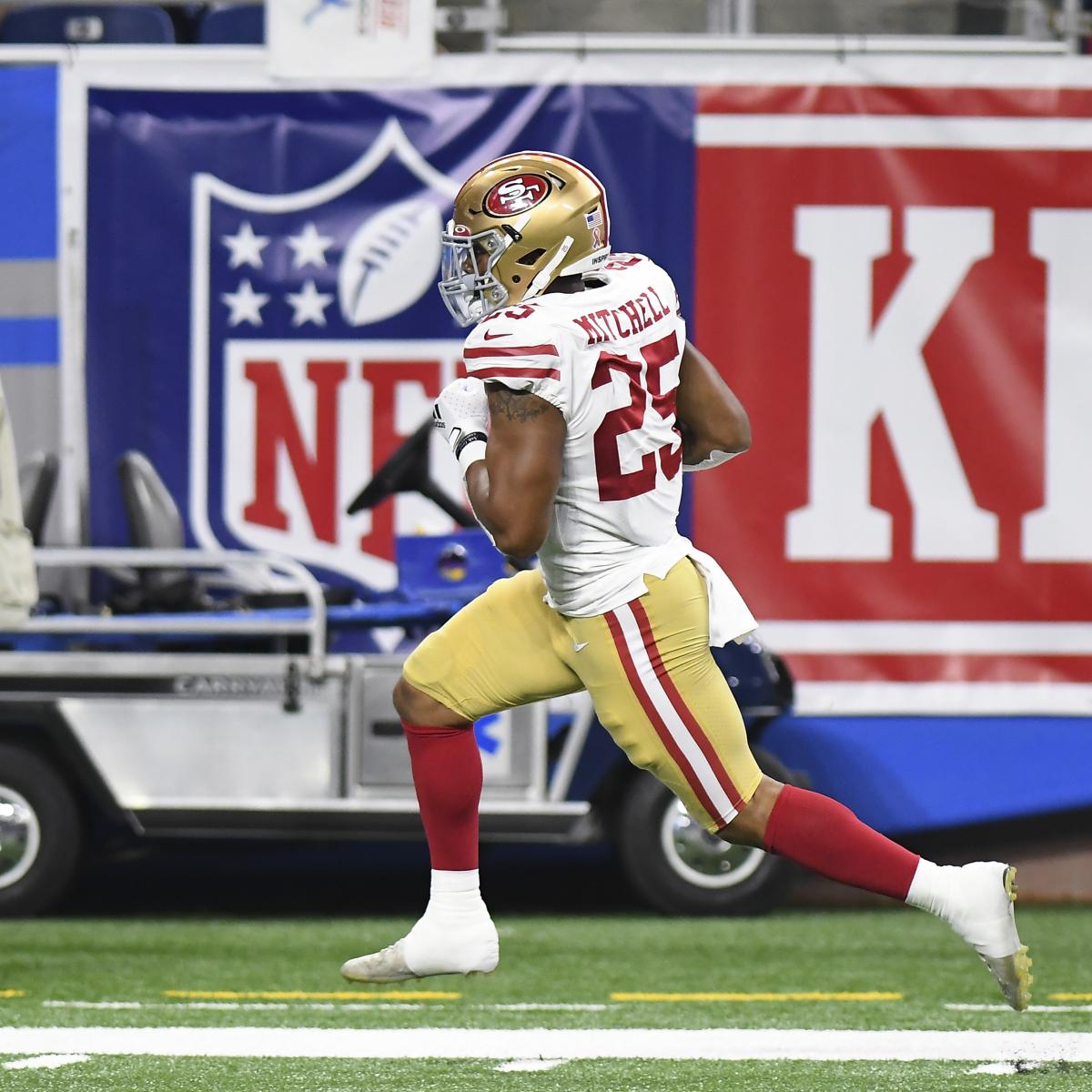 The San Francisco 49ers offense banked on players in Week 1 that were completely off most fantasy football radars.

With Week 2 now in focus, 49ers running back Elijah Mitchell is the top added player in Yahoo fantasy leagues.

Mitchell broke out in the season-opening win over the Detroit Lions and he should receive the bulk of the carries moving forward since Raheem Mostert is out with an injury.

Mitchell’s emergence was the biggest fantasy story of Week 1, but he was far from the lone running back that jumped on to the radar.

Houston Texans running back Mark Ingram shined against the Jacksonville Jaguars in his RB1 role. That performance was enough to convince fantasy players that he is a viable option off the waiver wire for Week 2 and beyond.

Mitchell became the latest player to thrive in the Shanahan family running back factory on Sunday.

The sixth-round pick in the 2021 NFL draft ran for 104 yards and a touchdown on 19 carries and is now expected to be the top running back on the San Francisco depth chart.

Mitchell is the top added player in Yahoo fantasy football leagues right now, and rightfully so, since he is about to follow in the long line of players that have succeeded under Mike and Kyle Shanahan at the position.

Kyle Shanahan plugged in Tevin Coleman, Matt Breida, Jeff Wilson Jr. and others during his time in San Francisco. His father, Mike, made stars out of Olandis Gary, Mike Anderson and many others in Denver.

Mitchell should be the top 49ers running back for a while with Mostert heading to the injured reserve with “chipped cartilage” in his knee, per ESPN.com’s Nick Wagoner.

Mostert’s extended layoff should give Mitchell plenty of time to establish his position as the No. 1 running back. He may even hold that role when Mostert returns if he plays as well as he did in Week 1.

Mostert is on top of the transaction trends in the other direction.

The No. 1 running back to start San Francisco’s season is now on the shelf for six-to-eight weeks and is Yahoo’s top dropped player after Week 1.

The emergence of Mitchell and the potential for other running backs to thrive while Mostert is out makes him replaceable not only while he is hurt, but potentially when he returns as well.

There is no guarantee Mostert will return to a heavy workload in the middle of the season. Mitchell and others could achieve success in his absence and the 49ers might be obliged to use a running back by committee system like they have in previous years.

If you drop Mostert, there should be a few running back options out there. Mitchell and Ingram are the top two, but you can also look at the Baltimore duo of Ty’Son Williams and Latavius Murray as well as Philadelphia’s Kenneth Gainwell, who was the clear No. 2 back behind Miles Sanders in Week 1.

Ingram is the clear RB1 in Houston.

The former Baltimore running back carried the ball on 26 occasions for 85 yards and a score in the blowout win over Jacksonville.

Houston’s reliance on Ingram and others gave us a good look into how the team will manage its offensive production with Tyrod Taylor at quarterback.

The Texans ran the ball 41 times in Week 1. Taylor attempted 21 passes in his team debut in place of Deshaun Watson.

Ingram is the clear favorite for carries above Phillip Lindsay and David Johnson, who both had touchdowns in Week 1, and he is the best option of the trio to pick up from the waiver wire.

Houston’s schedule gets harder in Week 2 with a road trip to Cleveland, but it is worth noting Ingram has plenty of experience dealing with the Browns front seven from his time in Baltimore.

An easier Week 3 matchup at home versus the Carolina Panthers should help convince fantasy players to pick Ingram up now before he is widely unavailable.

Ryan Fitzpatrick suffered the other major injury from the fantasy football perspective in Week 1.

The Washington Football Team quarterback suffered a hip subluxation and was placed on injured reserve, per NFL Network’s Ian Rapoport.

Fitzpatrick carried some promise as a fantasy quarterback because of the young targets Washington surrounded him with.

Terry McLaurin has turned into a solid No. 1 wide receiver, tight end Logan Thomas had a breakout 2020 campaign and Antonio Gibson can be a pass-catching force out of the backfield.

The fantasy outlook on Washington’s entire offense changed with Fitzpatrick’s injury. Taylor Heinicke is not an immediate addition and his presence could dip the values of McLaurin and Thomas.

Gibson is the biggest beneficiary from the Fitzpatrick injury. Washington’s top running back should receive more touches as Heinicke tries to find comfort in the aerial attack.

As for Fitzpatrick, he should stay on the waiver wire until he comes back and proves the injury will not affect his season.

Denial of responsibility! NewsUpdate is an automatic aggregator around the global media. All the content are available free on Internet. We have just arranged it in one platform for educational purpose only. In each content, the hyperlink to the primary source is specified. All trademarks belong to their rightful owners, all materials to their authors. If you are the owner of the content and do not want us to publish your materials on our website, please contact us by email – [email protected]. The content will be deleted within 24 hours.
Loading...
Loading...
best sports newsDropsnews update sportsnewsupdatePickupssports newssports updateTop

Patrick Mahomes on Chiefs’ Loss to Chargers: ‘A…

Why teen Ansu Fati has Barcelona dreaming again after…