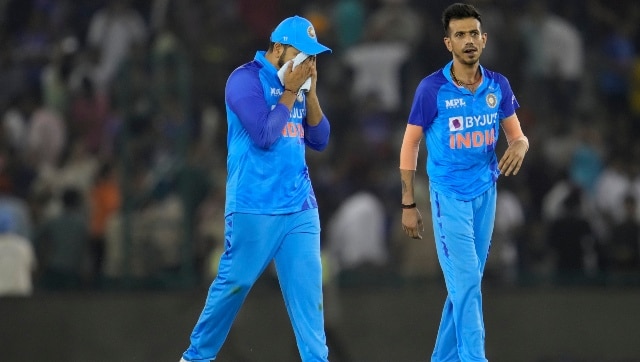 Former India batter Wasim Jaffer is worried about Yuzvendra Chahal‘s form after the first T20I between India and Australia and said that he would want to see what Ravi Bishnoi or Kuldeep Yadav would bring to the table.

Team India’s concern regarding the bowling unit continued after the Asia Cup debacle. On Tuesday, the first T20I against Australia saw another failure of the Indian bowlers while defending a mammoth 208-run target. Every bowler except Axar Patel conceded more than 10 runs per over in the match, helping the visitors breach the target with ease.

Frontline pacer Jasprit Bumrah’s absence turned out to be a huge factor in the death overs again, just like in the Asia Cup as experienced names like Bhuvneshwar Kumar and Yuzvendra Chahal also failed miserably.

Though the batting-friendly surface became a huge problem for the pacers, wrist spinners were seen coming in handy on some occasions. However, Chahal’s performance was quite below-par as the leggy conceded as many as 42 runs in his 3.2 overs including a late wicket of Tim David in the final over of the match.

India is paying a huge price by playing Yuzvendra Chahal. You cannot be giving away 35-40 runs every game under the shield of 3-25 that you have in one match. If there’s scrutiny coming on Rahul & Pant, then Chahal doesn’t deserve to be spared. #INDvsAUS

Referring to that, former Indian cricketer Wasim Jaffer expressed his worry about Chahal serving the duty of the main spinner in the T20 World Cup squad. According to him, Chahal lacked variations resulting in Aussie batters punishing him brutally.

While speaking to ESPN Cricinfo, Jaffer stated that India could have considered youngster Ravi Bishnoi following his performance in the big match against Pakistan in the Asia Cup. He sent off Pakistan’s star batter Babar Azam in his very first over. The young spinner also had the best economy rate among Indian bowlers in that match.

The 22-year-old has already taken his wicket count to 16 in 10 T20Is in the Blue jersey. Bishnoi was also quite impressive in the latest season of the IPL. He featured in 14 matches for Lucknow SuperGiants and picked up 13 wickets.

Jaffer also took the names of senior spinners Ravichandran Ashwin and Kuldeep Yadav. He noted, “Of course, we can expect from Ashwin and Chahal. But I’ll be interested to see what Bishnoi and Kuldeep Yadav can provide. I will be worried if Chahal continues this kind of performance.”

Jaffer also took a dig at India pacers – Harshal Patel and Bhuvneshwar Kumar. The duo could not put up a strong challenge in front of the in-form Australian side. Kumar’s bowling in the death overs did not go down well with Jaffer, but he was quite lenient with Harshal Patel. Coming to Patel, Jaffer said, “You can feel bad for Harshal Patel because he recently recovered from an injury.”

The former batter also made a special mention of India’s dependency on Jasprit Bumrah in this matter. Like others, he was also hopeful of India’s bowling department to get significant strength with the inclusion of Bumrah in the starting XI.

Denial of responsibility! NewsUpdate is an automatic aggregator around the global media. All the content are available free on Internet. We have just arranged it in one platform for educational purpose only. In each content, the hyperlink to the primary source is specified. All trademarks belong to their rightful owners, all materials to their authors. If you are the owner of the content and do not want us to publish your materials on our website, please contact us by email – [email protected]. The content will be deleted within 24 hours.
aheadbest sports newsChahalsCupformJaffernews update sportsnewsupdate

5G Launch in India: GoI aims for pan-India penetration in 2…