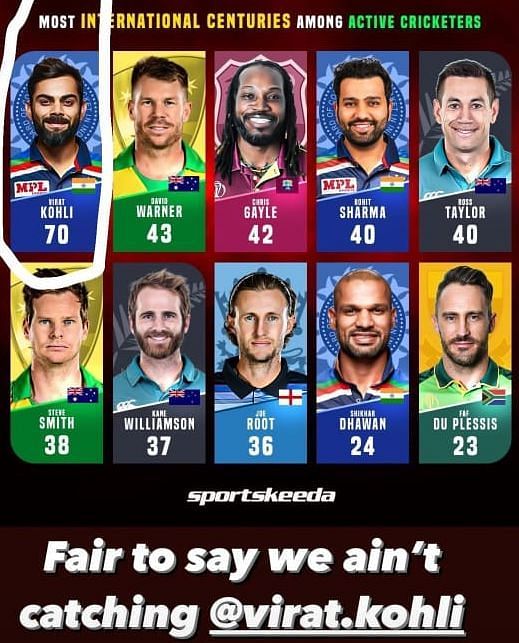 “Most 100s in international cricket among active players. Virat Kohli miles ahead at the top.”

As is obvious, Virat Kohli tops the list of most international hundreds among active cricketers with 70 tons. Warner (43) himself is a distant second, followed by Chris Gayle (42), Rohit Sharma (40) and Ross Taylor (40).

Overall, Virat Kohli is third on the list of cricketers with the most international hundreds. The elite club is headed by Sachin Tendulkar (100), followed by Ricky Ponting (71).

Virat Kohli is tied with retired Aussie legend Ponting on the list of captains who have scored most international hundreds. Both Ponting and Virat Kohli have 41 centuries to their name as skipper.

While Virat Kohli has amassed 70 hundreds in international cricket, he hasn’t registered three figures in any format of the sport since his ton against Bangladesh during the pink-ball Test in November 2019.

According to former Pakistan captain Salman Butt though Virat Kohli’s elusive hundred is not a cause for any worry.

“He’s broken so many barriers already. Who could have thought that a boy in his age will get 70 centuries? Who would have that he would become as fit as he is today, or carry the kind of form that he has? He has a strike rate of 90 in chases, an average of over 50 in all three formats. Who would have thought? These are barriers he’s already crossed. Who can stop him from crossing this barrier? In fact, he can do it in the next match or the next series itself.”

Virat Kohli will lead India in the World Test Championship (WTC) final against New Zealand in Southampton as well as the five-match Test series in England.

Denial of responsibility! NewsUpdate is an automatic aggregator around the global media. All the content are available free on Internet. We have just arranged it in one platform for educational purpose only. In each content, the hyperlink to the primary source is specified. All trademarks belong to their rightful owners, all materials to their authors. If you are the owner of the content and do not want us to publish your materials on our website, please contact us by email – [email protected]. The content will be deleted within 24 hours.
activeaintAustralia Cricket Teambest sports newscatchingCricketcricketersDavid

Why Have There Been So Many No-Hitters in 2021?