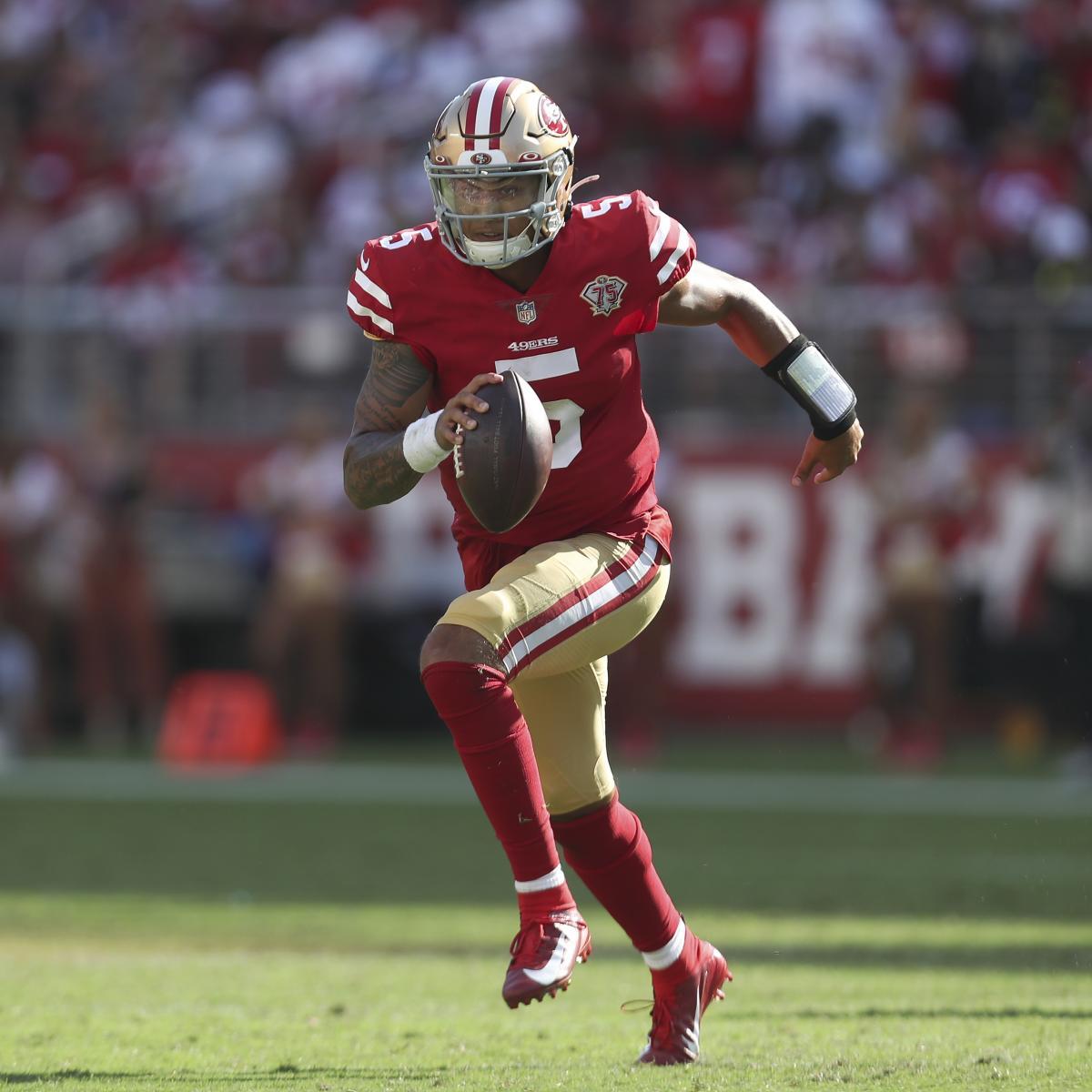 The best day of the week for football fans is here again, and there’s another packed slate of NFL action Sunday. There are 14 games on the schedule, so for those interested in daily fantasy sports, there are plenty of players to choose from when constructing your lineup for Week 5.

All week, there’s been plenty of analysis of these matchups, as fantasy managers have considered who are the best players to put into lineups, which has also been the case in DFS.

It’s almost time to lock in your roster and hope that your research and preparation pays off. Here are some key players you should strongly consider building your DFS lineup around Sunday.

Trey Lance is making his first NFL start Sunday, and he immediately becomes worthy of DFS consideration. In his limited action through the first four weeks, he showed the skills that made many excited about his fantasy potential for years to come.

If the San Francisco 49ers are going to keep up with the Arizona Cardinals’ high-powered offense, they are likely going to be passing a good bit. And Lance’s speed always makes him a threat to score rushing touchdowns, which boosts his fantasy value even higher.

Considering Lance has an affordable DFS price, you should be able to spend higher on other positions and still get tremendous production from your QB spot. If Lance plays up to his potential, his first start could be one to remember and potentially the first of many like it to come.

Sometimes, you just have to spend big if you want to win. Derrick Henry is the most expensive player in DFS on Sunday, so by including him in your lineup, you won’t have as much money available to use for other positions. But that is going to be more than worth it because of the numbers Henry is likely to put up.

The Tennessee Titans running back is off to an incredible start, even by his own lofty standards. Through four weeks, he leads the NFL in carries (113) and rushing yards (510) and is tied for the league lead with four rushing touchdowns. He’s had at least 28 carries in each of the past three weeks. Don’t expect him to slow down in Week 5.

The Titans are looking to bounce back against the winless Jacksonville Jaguars in a game they should control. That means Tennessee should bring a heavy dose of Henry, who is likely to register another big showing. Henry is worth his high DFS price every week, so don’t be hesitant to spend big to start him.

Ja’Marr Chase is off to a solid start to his NFL career, as he has 297 yards and four touchdowns through four games. In Week 4, he was held out of the end zone for the first time, but he set season highs in catches (six) and targets (nine) while recording 77 yards.

It’s clear that Chase and Cincinnati Bengals quarterback Joe Burrow still have the connection they shared during their time together at LSU, and it should mean big things over the rest of the year. On Sunday, they have a good chance of combining for some big plays against the Green Bay Packers.

Green Bay’s secondary is banged up and will most notably be without top cornerback Jaire Alexander. But the Packers offense should put up plenty of points, so this is likely to be a high-scoring matchup. That makes Chase a strong DFS option at a mid-tier price. He’s a safe bet to put up solid points and has the potential for a huge performance.

It’s tough to run the ball against the Tampa Bay Buccaneers, who are allowing an NFL-low 47.5 rushing yards per game. But it’s not nearly as difficult to pass against the Bucs’ banged-up secondary, which is also giving up an NFL-high 327.5 yards through the air per game.

The Miami Dolphins know this, and they are likely going to need to pass a good bit if they hope to move the ball Sunday. If that’s the case, then expect plenty of targets for Mike Gesicki, who has been one of the most reliable pass-catching options for Miami’s offense this season.

Over the past two weeks, Gesicki has been targeted 18 times, turning those into 15 catches for 143 yards and a touchdown, his first of the season. He should have another solid showing against Tampa Bay, and he comes at a DFS price below the top tier, making him a smart choice.

Denial of responsibility! NewsUpdate is an automatic aggregator around the global media. All the content are available free on Internet. We have just arranged it in one platform for educational purpose only. In each content, the hyperlink to the primary source is specified. All trademarks belong to their rightful owners, all materials to their authors. If you are the owner of the content and do not want us to publish your materials on our website, please contact us by email – [email protected]. The content will be deleted within 24 hours.
best sports newsdailyDraftKingsFanDuelfantasyFootballlineupnews update sports

How to Join FaceTime Calls on Any Device