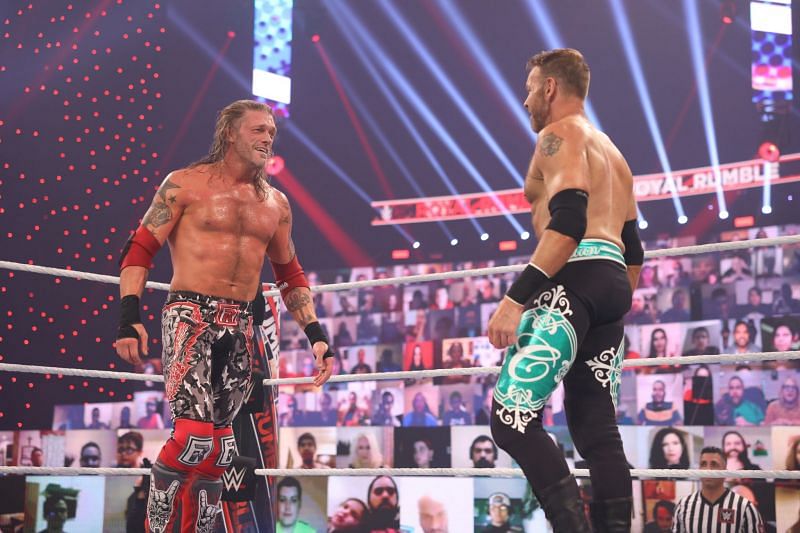 Edge got his name from an Albany, New York radio station. He was driving there when he heard a rock station whose name was Edge, and it stuck with him.

The name ended up being a good choice as he was loved by fans from near the beginning of his career.

Where did Edge get his name from?

Edge revealed during an interview early in his career that he got the name when he was pondering the topic while driving through Albany listening to the radio. The names he had been offered by WWE didn’t really suit him. He wanted to wrestle under his real name but, at the time, that was not really done in WWE:

“I wish it were a cool story, it’s really not. At the time in WWE had Rage and Riot, these different names that I didn’t really connect with. I just wanted to be Adam Copeland, but at that time everyone had a name. So I was listening to a radio station. I was driving through Albany, New York. It was Edge 103.7 or something. I went, ‘Edge, that’s not too bad.’ I ran that by them and they were like you’re Edge. I wish I would have thought of something with two syllables that was much more chantable like, Ro-cky, Ho-gan, Aust-in. E—eeedge. It doesn’t work. Now I’m going to hope for Rated-R, Rated-R. That’s what I’m going to hope for,” Edge explained.

Thankfully for Edge, that plan worked out and the audience found a way to chant his name on a regular basis whenever he was on a show. The Rated-R Superstar’s name stuck and he became one of the most beloved wrestlers of all time.

A lot of fans thought that there was a hidden meaning behind Edge’s name, but there really was not. There was speculation that by Edge, WWE meant that the superstar was “on the edge of insanity”, and while he did a good job of portraying a psychopath at various stages of his career, that was not the reason for the name at all.

Just going to leave these pictures of Edge and Christian sharing this moment during the Men’s 2021 Royal Rumble here on your timeline. ❤️ ( Pics via WWE) pic.twitter.com/sOirhEPNn1

It is interesting to speculate about whether Edge’s career would have been drastically different if he had a different name. The superstar recently returned to SmackDown and assaulted Roman Reigns.

Denial of responsibility! NewsUpdate is an automatic aggregator around the global media. All the content are available free on Internet. We have just arranged it in one platform for educational purpose only. In each content, the hyperlink to the primary source is specified. All trademarks belong to their rightful owners, all materials to their authors. If you are the owner of the content and do not want us to publish your materials on our website, please contact us by email – [email protected]. The content will be deleted within 24 hours.
best sports newsEdgeedgesfeaturenews update sportsnewsupdateOriginsports news

How Rewarding Is Amazon AWS Certified Solutions Architect – Professional Certbolt Certification to Your IT Career?

The End of Google Stadia