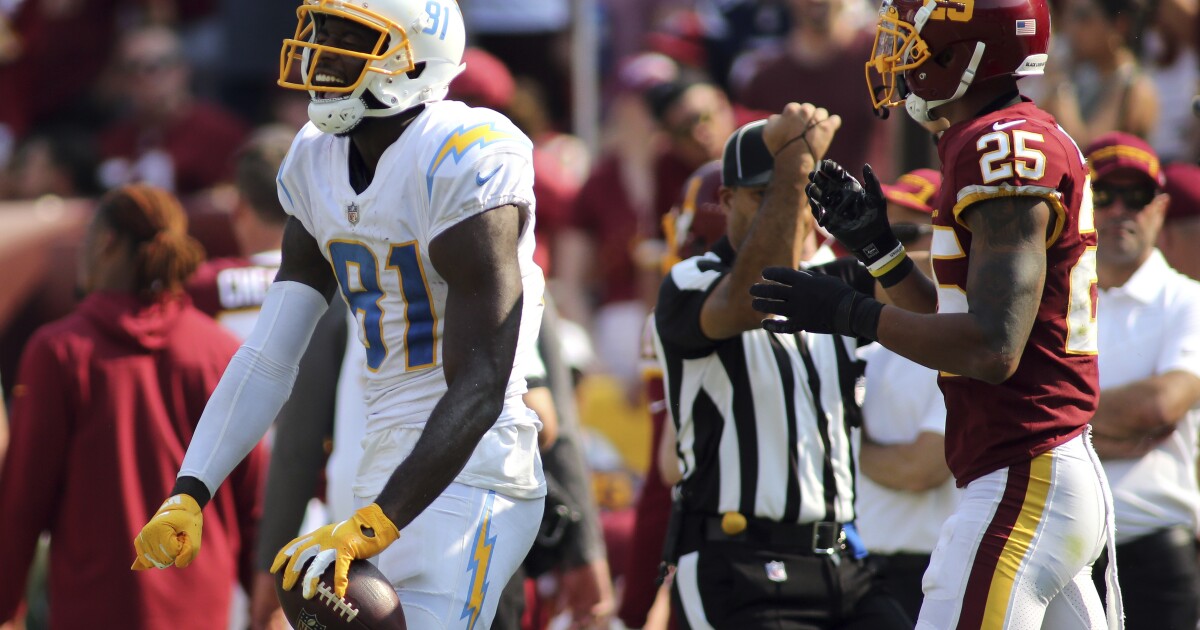 What we learned from Chargers’ 20-16 victory at Washington: Michael Williams a catch

The Chargers opened their season Sunday with a 20-16 victory over Washington.

For much of the offseason and training camp, the Chargers touted Mike Williams, promising an increased role for the wide receiver in their new offense.

Quarterback Justin Herbert, in particular, praised Williams, saying, “We need to get him the ball more.”

Williams was a weapon and was featured Sunday. He finished with eight receptions for 82 yards and a touchdown. Herbert threw in Williams’ direction 12 times.

The eight catches marked a career high; the 12 targets were the second-most ever for Williams.

All this production came on a day that included Williams dropping what would have been a touchdown pass in the third quarter.

Staley said Herbert’s response to that miscue was key.

“The way he is at quarterback, he ignites you when you have a drop,” Staley explained. “He’s going right back to you. … He kept going back to Mike, and Mike ended up making a bunch of big plays.”

Williams is playing what’s known as the “X” receiver in the Chargers’ new scheme. It’s the same position Michael Thomas plays with New Orleans. In his first four NFL seasons, Thomas had at least 121 targets each year.

“I think that there will be some natural production that comes his way because of the nature of the offense,” said Joe Lombardi, a former long-time assistant with the Saints and now the Chargers’ offensive coordinator.

Herbert showed zero signs of a sophomore slump in his 2021 debut, completing 31 of 47 passes for 337 yards and a touchdown, with one interception.

Except for an errant throw that became a fourth-quarter interception, he was accurate firing the ball downfield and also throwing short and intermediate routes.

“If we didn’t have the drops that we had in this football game, this guy throwing the ball would have had a spectacular day,” Staley said. “We had a couple drops that really hurt us.”

Herbert’s touchdown pass went to Williams on a ball that only Williams could have caught. The completion was nearly impossible to defend.

“They say red-zone fades are low percentage,” Staley said. “But what they don’t tell you is when you throw them to the right people, with the right matchup, they’re real high percentage.”

At first glance, rookie Rashawn Slater appeared to play like a first-rounder. The left tackle helped pave the way in the running game — especially early — and had no glaring mistakes.

Said Herbert, “I thought our offensive line did an incredible job.”

The game-sealing third-down conversion was classic Keenan Allen, who is widely recognized as perhaps the league’s top route runner.

Reading Washington’s nickel back, he darted in the opposite direction and gave Herbert an easy, open target.

“We just trust him to make those” reads, Herbert said.

Lombardi has given Allen freedom to break from designed routes based on what he sees the defense doing.

Rookie Larry Rountree III was the first running back in the game after Austin Ekeler and did nothing to suggest his role will change any time soon.

He finished with eight carries for 27 yards. Veteran Justin Jackson carried once for five yards. Jackson did have a tackle and an assist on special teams.

This new offense certainly can be balanced. Herbert targeted nine teammates, not one of which was Ekeler.

A top playmaker, all of Ekeler’s 15 touches came on carries. Herbert explained afterward that the plan always will be to look downfield first before checking down to Ekeler.

The guess here is Ekeler won’t go without a target Sunday when the Chargers play Dallas at SoFi Stadium.

Denial of responsibility! NewsUpdate is an automatic aggregator around the global media. All the content are available free on Internet. We have just arranged it in one platform for educational purpose only. In each content, the hyperlink to the primary source is specified. All trademarks belong to their rightful owners, all materials to their authors. If you are the owner of the content and do not want us to publish your materials on our website, please contact us by email – [email protected]. The content will be deleted within 24 hours.
Loading...
Loading...
best sports newscatchchargersLearnedMichaelnews update sportsnewsupdatesports news

Deshaun Watson ‘Hasn’t Been a Distraction’ for the Texans, Says HC David Culley