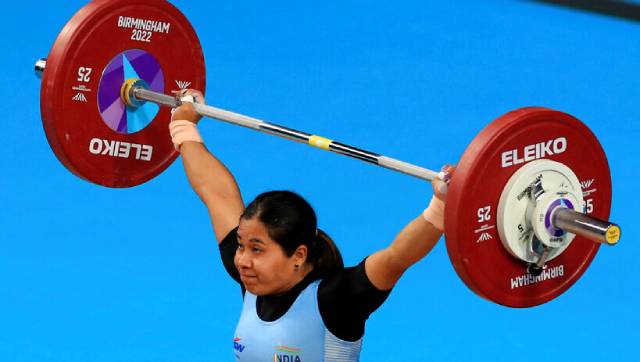 Struggling for a job and marred with family’s financial crisis, Bindyarani turned to her idol Mirabai Chanu for help as the Tokyo Olympics silver winner gifted her expensive lifting shoes.

India’s Bindyarani Devi became the fourth Indian weightlifter to win a medal on Day 2 of the Commonwealth Games as the 23-year-old Manipuri lifter claimed a silver medal in the 55kg women’s category on late Saturday. She also set the Games record in the clean and jerk segment by lifting 116kgs while lifting 202kg in total. She also matched Mirabai Chanu’s national record of 86kg in snatch.

Following the footsteps of Mirabai, Bindya always looked up to the Tokyo Olympic silver medallist as she trained at the same Sports Academy as Mirabai in Manipur.

Born in 1999, Bindyarani rose to prominence in the weightlifting world with a World Championship gold medal in December 2021 in the clean and jerk segment of the 55kg category. On her way to the gold, she defeated Tokyo Olympic Test event champion Ham Eun-ji.

The season, however, ended on a sour note when she lost out to Nigeria’s Adijat Olarinoye in the gold medal battle at the Commonwealth Championships in Tashkent. The loss came as a surprise as she won the tournament in the same category in Samoa in 2019. The defeat also exposed her weakness, as pointed out by national coach Vijay Sharma.

“She is a bright talent and her gold medal at the World Championships shows that. Ahead of CWG, we tried to work on her weakness in snatch. We tried to make up for it as much as we can and she might set the national record as well but catch up to the Nigerian will be tough,” said Sharma right before the Olympics.

Evidently, at the Commonwealth Championships, Bindya was close in the clean and jerk segment with a lift of 113kg, one less than Olarinoye. However, her best in snatch hadn’t been above 84kg while Olarinoye lifted a strong 90kg.

The national record in 55kg snatch still remains with Mirabai, who lifted 86kg in the segment. Interestingly snatch has been a weakness of Mirabai as well and has been working on improving it with World Championship in Colombia later this year in mind.

Bindya, however, has been always a fan of Mirabai, who she likes to call Mira di and said the Tokyo star has been a guide to her career and gave her an expensive but essential gift.

“Mira di has been very important to my success,” said Bindyarani last year after winning the silver medal. “She is always there to help me with my technique and training. When I was new at the camp, she also ensured I settle down easy. Di knew I didn’t have the money to buy the lifting shoes but she didn’t think twice before gifting me those shoes. She was always an inspiration and her down-to-earth behaviour made me her bigger fan.”

However, the double medal success at the World Championships didn’t result in a job as the 23-year-old lifter said her family is in a dire need of it and is important to her Olympic ambitions

“I hope to get a job soon because it’s important for my Olympic ambitions. I don’t really come from a rich family so getting a job is important now,” she said.

“Winning the Olympic gold medal is what always drives me. After watching Mira di do the same at Olympics, I am more inspired to achieve it. “

At the Khelo India National Ranking tournament earlier this year in Dharamshala, Bindya also improved on her clean and jerk record by a kg to 115kg while lifting 199kg in total while confirming herself as the country’s best in the category ahead of the likes of Shrabani Das and Ananya Patil.

Denial of responsibility! NewsUpdate is an automatic aggregator around the global media. All the content are available free on Internet. We have just arranged it in one platform for educational purpose only. In each content, the hyperlink to the primary source is specified. All trademarks belong to their rightful owners, all materials to their authors. If you are the owner of the content and do not want us to publish your materials on our website, please contact us by email – [email protected]. The content will be deleted within 24 hours.
best sports newsBindyaraniChanuclinchesCommonwealthDevidubbedFirstpost