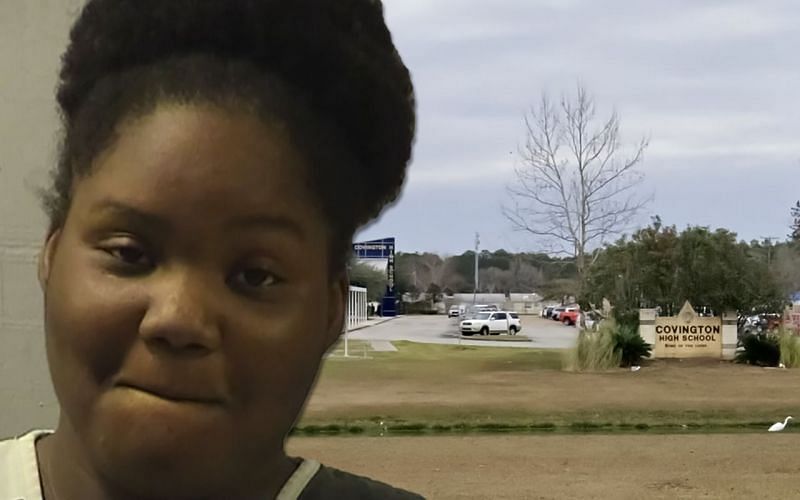 Eighteen-year-old student Larianna Jackson was arrested and charged with assaulting her schoolteacher at Covington High School.

The Louisiana-native was accused of striking a 64-year-old disabled teacher on Wednesday. The student was taking part in a viral TikTok challenge, which landed her in jail.

Larianna Jackson took part in the “slap a teacher” TikTok challenge, which has been circulating on the platform. The trend now stands as a concern for many educators. It follows the “devious lick” TikTok trend where students stole and vandalized school property.

“I was just devastated to know what our teachers go through on a day-to-day basis just to educate students. For this teacher to be having a conversation with a student and then to be assaulted in this manner was very disturbing.”

In the disturbing video, captioned “This Covington fa ya”, Larianna Jackson can be seen conversing with the teacher before she goes on to repeatedly strike them as they are seated.

The Covington Police Department responded to the felony, which took place at the school. Larianna Jackson’s TikTok was filmed immediately after the dismissal bell had rang.

The Convington Police Department confirmed in a statement:

“Upon officer’s arrival it was learned that the disabled 64-year-old schoolteacher, was viciously attacked by 18-year-old Covington High School student, Larrianna Jackson. Due to injuries sustained by the attack, the teacher had to seek medical attention at a local hospital.”

In a press release, police wrote that Larianna Jackson:

“was arrested and charged with violation of L.R.S. 14:34.3, Battery of School Teacher (Felony). Jackson was then transported to St Tammany Parish Jail where she will await prosecution.”

The California Teachers Association has shed light on the upcoming TikTok challenge on their Facebook group, where they wrote:

“Educators, beware! As if widespread vandalism in our schools last month wasn’t enough, the same ‘challenge’ circulating on social media networks TikTok and Twitter is now calling for students to slap a staff member.”

As the “slap a teacher” TikTok challenge continues to gather participants online, TikTok was urged to condemn the challenge on Twitter. They wrote:

“The rumored ‘slap a teacher’ dare is an insult to educators everywhere. And while this is not a trend on TikTok, if at any point it shows up, content will be removed.”

The rumored ‘slap a teacher’ dare is an insult to educators everywhere. And while this is not a trend on TikTok, if at any point it shows up, content will be removed. Learn more about practicing responsible behavior here: pta.org/docs/default-s…

The rumored ‘slap a teacher’ dare is an insult to educators everywhere. And while this is not a trend on TikTok, if at any point it shows up, content will be removed. Learn more about practicing responsible behavior here: pta.org/docs/default-s…

Following the arrest of Larianna Jackson, parents have also been urged by educators to converse with their children about the consequences they would have to face if they participate in such challenges.

Denial of responsibility! NewsUpdate is an automatic aggregator around the global media. All the content are available free on Internet. We have just arranged it in one platform for educational purpose only. In each content, the hyperlink to the primary source is specified. All trademarks belong to their rightful owners, all materials to their authors. If you are the owner of the content and do not want us to publish your materials on our website, please contact us by email – [email protected]. The content will be deleted within 24 hours.
Accusedbest sports newschallengeDisabledfeatureinspiredJacksonLarianna

May be Hardik Pandya will start bowling from next week, have confidence in his abilities: Rohit Sharma | Cricket News – Times of India