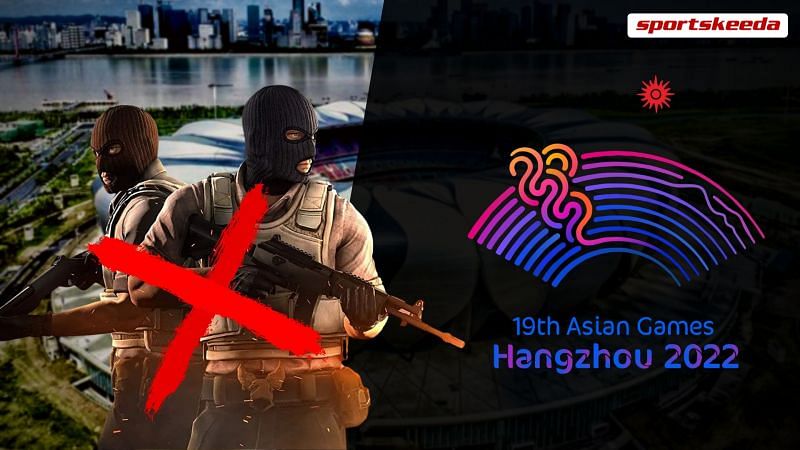 Why CS: GO has not been included in Asian Games 2022

The Asian Games in Hangzhou, set for 2022, will be a landmark occasion in the history of competitive video games because for the very first time, esports will be included as a medal event.

And while Asian Games 2018 did host six esports titles, they were noted as exhibitions. Coupled with that, the medals achieved were not considered as part of the final medal tally.

Hence, it’s not surprising that esports enthusiasts around the world consider Asian Games 2022 as one of the most anticipated events of the year. Its success is bound to push competitive gaming a bit closer to becoming a mainstream sporting event.

Unlike 2018, the 2022 competition will add two more video game titles to the list, bringing the cumulative score to eight. However, while it’s a joyous moment for the esports community to see so many long-standing games being selected for the event, many are baffled to find that CS: GO hasn’t made the cut.

Counter-Strike has the longest-standing pedigree out of all the competitive video games on the market, and even with the release of Riot Games’ Valorant last year, Valve’s shooter remained strong when it came to popularity.

In the past year, it averaged a monthly “peak user count” of 800k to 1 million according to stemcharts.com. The celebrated title reported a record high of 1,164,396 users in December 2020.

So why did Valve’s DOTA2 get a passing grade and not CS: GO?

Ever since the titles for the Asian Games 2022 were announced, there has been a lot of speculation amongst community members regarding CS: GO’s failure to make it to the list.

A theory that hits too close to home cites CS: GO’s inherent violent gameplay and it championing the two sides of “Terrorist” and “Counter Terrorist” as pertinent issues. Supposedly, both of these facets go against the ethos of the Asian Games.

Sportskeeda Esports was able to get in touch with their sources at the Olympic Council of Asia to dig up some more details. Questions concerned the reason behind excluding one of world’s most popular shooters.

“While we feel that CS: GO is an incredibly popular first-person shooter both inside and outside Asia, it, unfortunately, goes against the spirit of the Asian Games. CS: GO represents its two sides as Terrorists and Counter-Terrorist, which is why, while shortlisting the games, it was for this specific reason that CS: GO was excluded from the list.”

Compared to CS: GO, MOBAs like DOTA 2 and League of Legends have “Radiant-Dire” and “Red-Blue” respectively, as their two sides. Instead of representing real-life factions, they each create a fantasy world of their own and wage battles between these sides.

Additionally, the issue with the side names was not the only reasoning behind this decision; the problems with CS: GO ran a bit deeper than that. Sources further elaborated,

“Even if the names of the two sides are somehow changed, the issue remains with CS: GO’s base gameplay. The shooter has players using guns that actually exist in the real world and forces one side to plant a bomb, with the other side (who look like a well-trained military unit) trying their hardest to stop the bomb from going off. According to the council, this absolutely goes against the Olympic motto.”

In order to explain the “Olympic motto” concerning esports, it’s important to revisit a statement provided by Thomas Bach, President of the International Olympic Committee (IOC), earlier this year.

After esports was officially announced to be a medal event for the Asian Games 2022, the IOC reiterated their stance on the inclusion of competitive video games in the Olympics. Bach stated that any video game which encourages violence will not be a part of the event as it goes against its ethics.

“We have a clear red line that we do not want to deal with any game which is contrary to the Olympic values. Any game where violence is glorified or accepted, where you have any kind of discrimination, they have nothing to do with the Olympic values. This is not about revenue generation, this is about engagement. Our main motivation is to look for ways how we can convince the people playing these games to do the real thing.”

Going by these guidelines, it’s safe to assume that the entire premise of CS: GO as it stands today, is the absolute opposite of what the IOC is looking for in a video game.

Not all hope is lost for CS: GO fans

They simply cant use the global version because it is not approved.

That has been the case for PUBG PC which still haven’t got fully approved in China up to this day, same goes to the global version of PUBG Mobile hence why they have to clearly says “Asian Games Version”

While it’s disheartening for the Asian CS: GO community to see their favorite shooter not make it to the 2022 Asian Games, there is still a glimmer of hope. Sportskeeda’s sources feel that the shooter could get a passing grade for future Asian Games, if it is able to meet the guidelines.

“It’s not impossible for CS: GO to make it to future Asian Games events, however, the shooter will need drastic changes to be Olympic-friendly. Valve can also take a page out of Krafton’s book and make a version of the shooter, like the Asian Games-friendly version of PUBG Mobile.”

To those unaware, the global version of PUBG Mobile is banned in multiple Asian countries including China, India, Pakistan, Afghanistan, and Nepal. Hence, the version selected for Asian Games 2022 will be tailor-made for this specific event.

This is something that Valve can look into if they want CS: GO to be a part of future Asian Games.

Loading...
Denial of responsibility! NewsUpdate is an automatic aggregator around the global media. All the content are available free on Internet. We have just arranged it in one platform for educational purpose only. In each content, the hyperlink to the primary source is specified. All trademarks belong to their rightful owners, all materials to their authors. If you are the owner of the content and do not want us to publish your materials on our website, please contact us by email – [email protected]. The content will be deleted within 24 hours.
Loading...
Asianbest sports newsCS:GOEsports & Gamingexclusivegamesincludednews update sports

WWE Superstar Doudrop announces that she has married (Photos)

Virat Kohli as T20I captain: A statistical look at India…

Peyton and Eli Manning on the call for Tennessee-Ole Miss?…

prores: iPhone 13 Pro ProRes will be available with future…