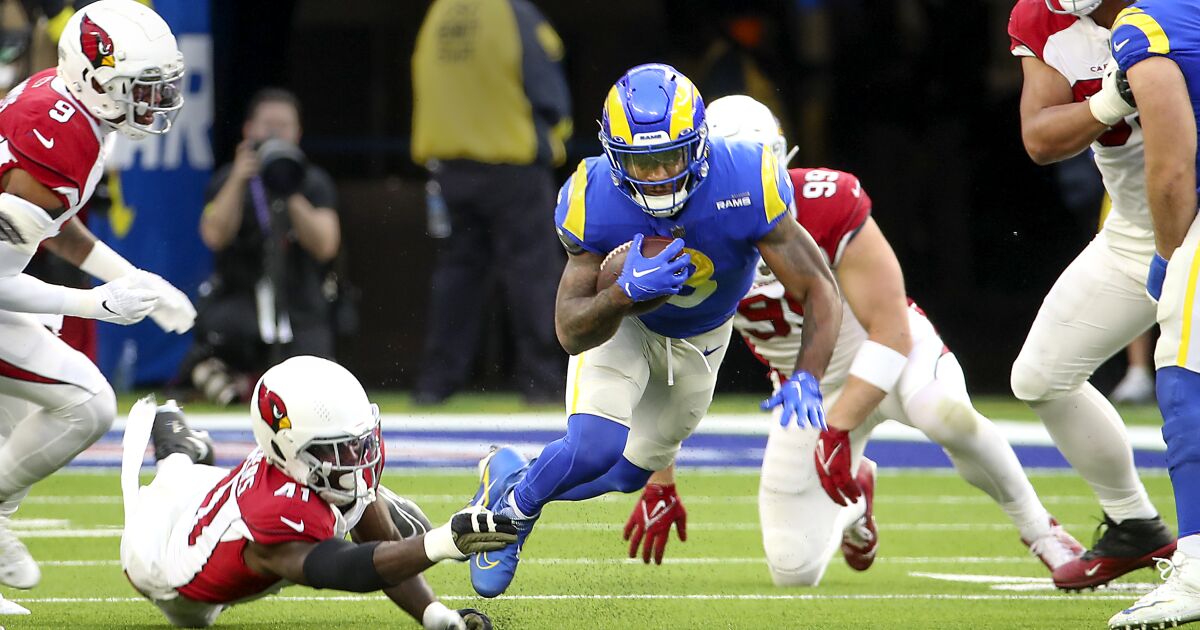 Why does coach Sean McVay keep abandoning the run? Here’s why Rams don’t get a pass

For the first time in a long time, the struggling Rams offense appeared to have found some answers.

It was something of a newsflash: The defending Super Bowl champion Rams executed an effective rushing attack.

And then, as quickly as it appeared, it was gone.

The Rams ran only 12 more times in a defeat that sent coach Sean McVay and his team to a third straight loss, the bottom of the NFC West standings and the brink of elimination from playoff contention.

“Did we get away from the run game too early and all that?” offensive coordinator Liam Coen said Thursday. “Maybe we did.”

The Rams (3-6) enter Sunday’s game against the New Orleans Saints (3-7) at or near the bottom of the NFL in several categories.

The Rams, only a few years ago the envy of the league for McVay’s offense and play-calling, are averaging only 16.4 points per game, which ranks 29th among 32 teams. They are second to last in yards per game (282.7) and dead last in rushing yards per game (68.1).

“It’s definitely something we want to continue to work on,” Coen said of the rushing attack. “But we’re also not going to bang our heads against the wall and run for zero.”

A big part of the Rams’ problems is the offensive line.

The group, which gave up seven sacks in the season opener against the Buffalo Bills, has been ravaged by injuries. On Sunday, for the 10th time in as many games, the Rams will start with a different iteration.

Is McVay optimistic the Rams can improve the running game?

“There’s a different narrative every single week,” he said, adding, “There’s always a lot of layers and things that go into the running game, but yes, I am.”

The Rams, of course, cannot do any worse.

On Sunday, quarterback Matthew Stafford is expected to return to the lineup after being sidelined last week because of a concussion suffered against the Tampa Bay Buccaneers.

The Rams will be without top receiver Cooper Kupp, who will sit out at least four games following surgery for an ankle injury suffered against the Cardinals.

That will provide opportunities for other receivers, but it also could convince McVay to rely more on running backs Darrell Henderson Jr., Cam Akers and rookie Kyren Williams.

Henderson has rushed for 274 yards and three touchdowns in 68 carries. The fourth-year pro said the offense must be more efficient and physical, especially on first down.

“We showed flashes of it,” he said. “We just got to be more consistent and that’s going to give us more opportunities.”

Akers has played in two games since returning from a two-game exile and the team’s failed attempt to trade him.

A commitment to the running game is the key to improving it, he said.

“If you don’t run the ball enough,” Akers said, “it’s kind of hard to get in a groove for all of us.”

Williams, a fifth-round draft pick from Notre Dame, played on offense for the first time against the Cardinals but did not carry the ball. He could get his first opportunities against the Saints.

“I bring a spark,” Williams said. “I can run the ball, catch the ball out of the backfield, so I feel like I can bring a lot of different dimensions to the offense, and energy as well.”

An effective Rams rushing attack could not only help the offense — and the passing game — but also take pressure off the Rams’ defense.

Defensive coordinator Raheem Morris has coached both offense and defense during his NFL career. He knows the toll an effective rushing attack can inflict on an opponent.

“It is miserable,” he said. “When your defense is playing and can’t stop the run, that’s a rough, long day, a hard day to try and find a way to get a win and usually you don’t. … When you run the ball in football, and you have the ability to do that, it always makes everything a little bit easier.”

Denial of responsibility! NewsUpdate is an automatic aggregator around the global media. All the content are available free on Internet. We have just arranged it in one platform for educational purpose only. In each content, the hyperlink to the primary source is specified. All trademarks belong to their rightful owners, all materials to their authors. If you are the owner of the content and do not want us to publish your materials on our website, please contact us by email – [email protected]. The content will be deleted within 24 hours.
abandoningbest sports newsCoachdontHeresMcVaynews update sportsnewsupdate