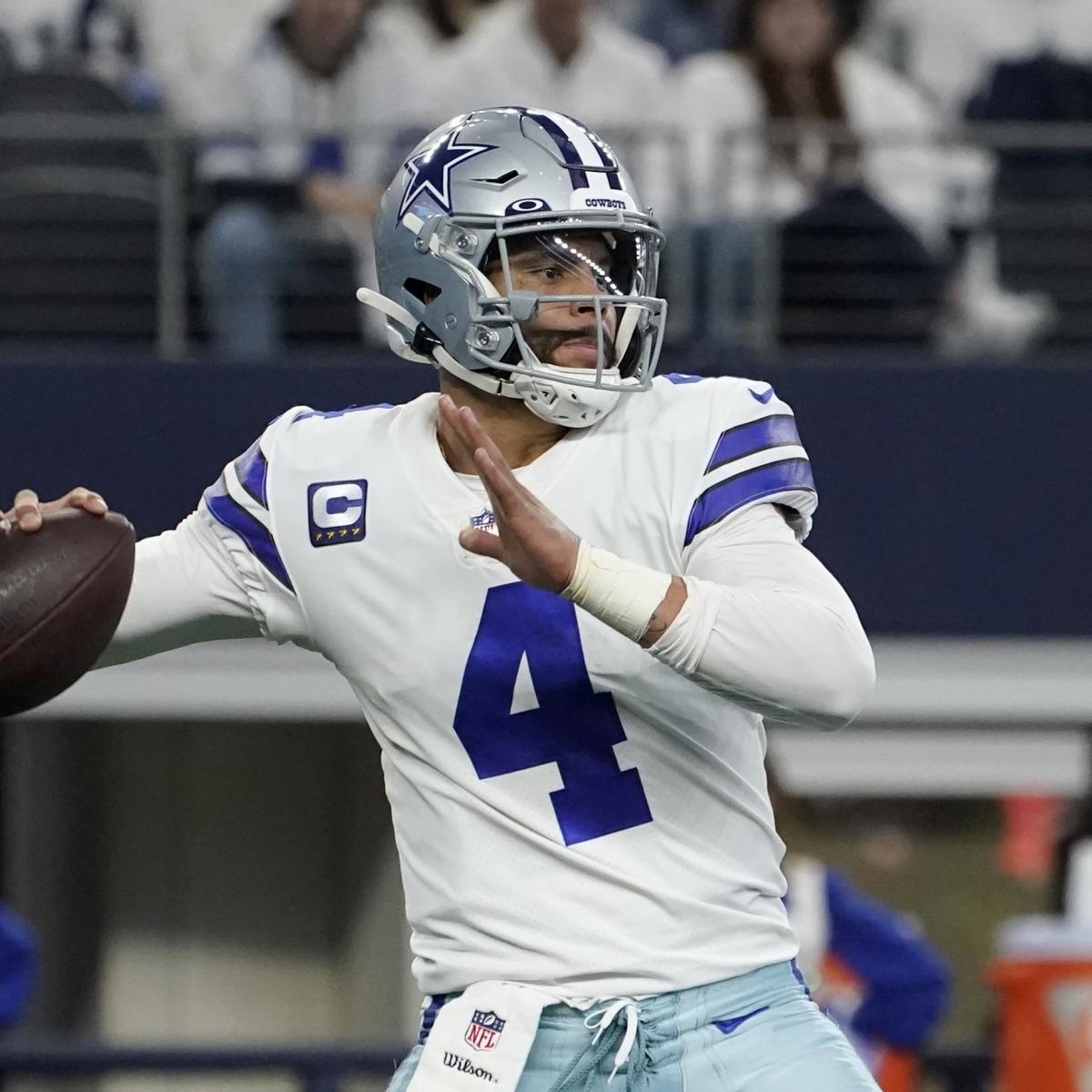 The Dallas Cowboys may have boasted the top total and scoring offense in football last year, but it’s unlikely the team will be able to repeat that feat in 2022.

Attrition is one of the main reasons why the Cowboys are poised to take a step back. The club failed to keep the band together after last year’s 12-5 finish that represented the team’s best showing since 2016.

Given Dallas dealt with another disappointing early playoff exit—the seventh time the Cowboys lost their postseason opener in their last 10 trips—it’s hard to blame team brass for wanting to shake things up.

It’s hard to believe, but it’s now been over 25 years since the 1995 Cowboys won it all and became the last Dallas squad to even reach the NFC Championship Game.

The wide receiver position was hit particularly hard by this shakeup. Dallas went from having one of the league’s deepest receiving corps last year to one that could be concerningly thin to start the 2022 campaign.

The team elected not to retain Cedrick Wilson Jr. after the emerging wideout had his best season as a pro in 2021. He proved to be an invaluable depth option for the Cowboys, starting four of the 16 games he appeared in last year while securing 45 of his 61 targets for 602 yards and six touchdowns.

The Miami Dolphins scooped the 26-year-old on a three-year deal worth a shade over $22 million.

Amari Cooper, who tied tight end Dalton Schultz for both the second-most targets and most receiving touchdowns on the roster last year, was traded away for a meager fifth-round pick and a slight move up the board in the sixth round.

While the move helped the Cowboys free up some cap space—Cooper had the highest salary of any wideout at $20 million last season, a contract that owner Jerry Jones thought was incongruent with his on-field production—the team still wasn’t able to make any splashes on the open market this offseason.

Dallas’ free-agency pickups were mostly quiet signings that bolstered depth. James Washington, a disappointing second-round pick for the Pittsburgh Steelers in 2018, was the only notable wideout inked to help fill the void left by Cooper and Wilson’s departures.

The Cowboys did use a significant chunk of their available finances to retain Michael Gallup. The four-year veteran, who only posted a single 1,000-yard campaign and missed almost half of the 2021 campaign with injury, signed a five-year, $57.5 million extension shortly after suffering a late-season ACL tear.

Gallup’s availability for Week 1 is still in doubt as he works his way back from that major knee injury.

Dallas will likely be asking a lot of from rookie Jalen Tolbert, the South Alabama product who was taken at No. 88 overall last month.

Tolbert was one of the top collegiate wideouts over the past two seasons and established himself as a solid receiver in a loaded class for the position, but he’s going to face much tougher competition than the Sun Belt defensive backs he battled with for most of his tenure with the Jaguars.

CeeDee Lamb will still draw the opponent’s top cornerback on a weekly basis, a challenge the second-year receiver proved he was up to last year when he amassed 1,102 yards and six touchdowns on 79 receptions. Unfortunately, he’ll face even more defensive attention this year unless Tolbert ends up being a rookie sensation.

Considering Dallas only ran on 40.39 percent of its offensive snaps and passed out of the shotgun formation on nearly 80 percent of Dak Prescott’s dropbacks, the lack of talented wideouts could come back to haunt this squad.

It’s hard to fault the Cowboys’ coaching staff for relying heavily on the passing game. Ezekiel Elliott, formerly one of the best running backs in the league, is now a shell of his former self.

Elliott was a true bell-cow back when he entered the league, averaging over five yards per carry on 322 totes as a rookie in 2016. He eclipsed 300 carries in 2018 and 2019 as well but saw his efficiency decline to 4.7 YPC and 4.5 YPC, respectively, in those seasons.

His usage and efficiency have gone down over the past two years, failing to even breach 300 total touches in either the 2020 or 2021 campaigns while averaging just 4.1 yards per rushing attempt in that span.

Elliott’s rushing production dropped below 60 yards per game for the first time as a pro last year, nearly half of the 108.7 rushing yards per game he posted as a rookie. It’s unlikely the 26-year-old will bounce back to those early-career numbers after taking so much wear and tear over the past half-decade.

Tony Pollard has been the much more efficient back for Dallas over the past three years and could take on a heavier workload in 2022. However, Pollard has yet to prove he can shoulder a larger role than the current change-of-pace one he assumes for the team.

He saw a career-high 130 totes in 2021—averaging a career-best 5.5 yards per carry on them—and could be in line for more this season. The Cowboys are undefeated in games where Pollard receives a double-digit carry count—going 11-0 while averaging 36 points—but game scripting has generally dictated that type of volume.

Regardless of who is pounding the rock for the Cowboys, it may be more difficult to find open lanes behind an offensive line that is undergoing change in 2022. Dallas came in at the top of PFF’s 2021 offensive line rankings but will be without two starters from that unit.

The team parted ways with tackle La’el Collins after he emerged as a stalwart on the right side of the line over the past four seasons. He was released with three years remaining on his contract, quickly coming to terms with the Cincinnati Bengals to shore up their shoddy offensive line.

The Cowboys also said goodbye to Connor Williams, their incumbent starting left guard, after the free agent was lured by the Dolphins with a two-year, $14 million contract.

Williams should be replaced by rookie Tyler Smith, the Tulsa product who Dallas selected at No. 24 overall last month. The club has had plenty of success drafting offensive linemen over the past decade, with its three first-round choices since 2011—Tyron Smith, Travis Frederick and Zack Martin—all making Pro Bowl appearances.

Collins’ successor appears to be Terence Steele, the undrafted free agent who has been playing a depth role for Dallas since 2020. Steele may be the weak point for this unit after he scored a concerning 50.3 PFF grade by allowing nine sacks on 970 snaps as a rookie. He improved his PFF grade to a 64.5 last year but still gave up another pair of sacks on 910 snaps.

Tyron Smith and Martin are still locked into their respective left tackle and right guard roles, but both have been injury-prone in recent seasons. Smith hasn’t played a full season since 2015, notably missing six games last year and 14 in 2020.

Martin missed a significant amount of time for the first time in his career in 2020 but bounced back to his All-Pro form in 2021 while playing 16 games. He’s on the wrong side of 30, however, and has plenty of tread worn off his tires after eight years in the league.

The Cowboys still have enough cap room—Spotrac projects them to be $13.4 million under the cap right now—to boost the offense by adding another free agent, but the team is running out of time to find suitable talent.

Veteran wideouts such as Julio Jones and Jarvis Landry are still looking for new homes this offseason, and they are players who could give Dallas some steady production at a relatively cheap price if they can stay healthy.

There are also some proven offensive linemen such as Duane Brown and Daryl Williams on the open market, and they could provide insurance to the offensive trenches and bolster a line in transition.

One of Dallas’ main issues last year was consistency, especially late in the season. After scoring 29 or more points in five of their first six games, the team only reached that mark four more times after the Week 7 bye.

The team’s two highest-scoring performances came down the stretch against a pair of NFC East rivals—Dallas dropped 56 on the Washington Commanders in Week 16 and 51 on the Philadelphia Eagles in Week 18—but those were sandwiched around a 25-22 loss to the Arizona Cardinals and punctuated by an embarrassing 23-17 loss to the San Francisco 49ers in the Wild Card Round.

It’s hard to envision the Cowboys having as high of an offensive ceiling as they did last year, but they can improve with better play-calling and shrewd adjustments by head coach Mike McCarthy and offensive coordinator Kellen Moore.

Dallas is far from hopeless this year. The team is still favored to win the division and is one of the top contenders in the NFC because of its combination of having a top-flight quarterback, elite weapons in Lamb and Schultz and an emerging defense that appears ready to take a step forward.

Even with the offense regressing slightly, the Cowboys will still be a strong team this year with a chance to make some playoff noise if they can improve their consistency and step up defensively.

Denial of responsibility! NewsUpdate is an automatic aggregator around the global media. All the content are available free on Internet. We have just arranged it in one platform for educational purpose only. In each content, the hyperlink to the primary source is specified. All trademarks belong to their rightful owners, all materials to their authors. If you are the owner of the content and do not want us to publish your materials on our website, please contact us by email – [email protected]. The content will be deleted within 24 hours.
best sports newsCowboysDallasnews update sportsnewsupdateOffensesports newssports update