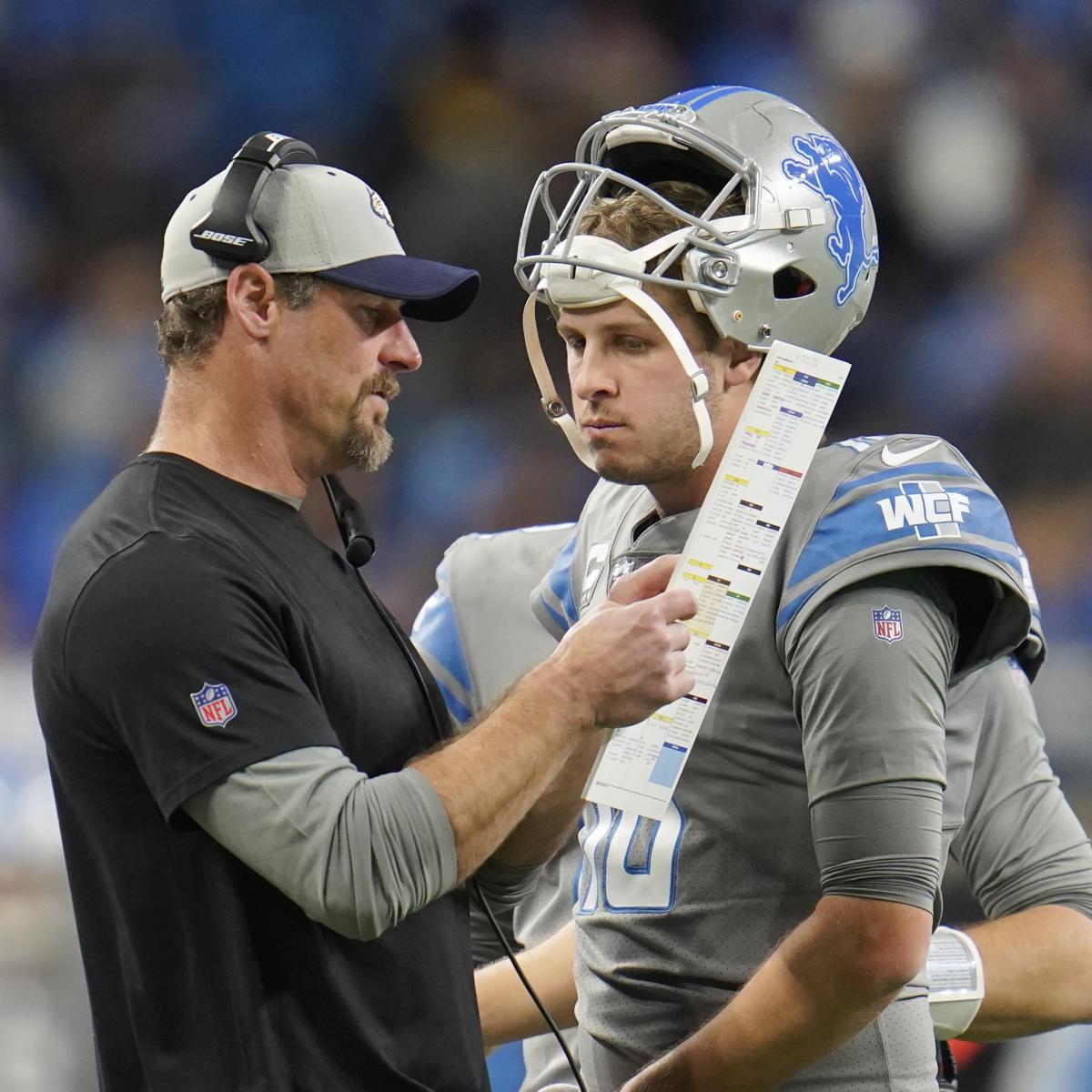 Every year, we look at the final NFL standings and spot at least one shocker that surprised us.

Who thought the Cleveland Browns would make the playoffs with an 11-5 record in 2020? How about the 2021 Cincinnati Bengals going all the way to the Super Bowl LVI?

In 2022, the Detroit Lions could push for a playoff spot. While it sounds outlandish four months away from Week 1, take a look at their roster and the other teams in the NFC North.

The Green Bay Packers lost their top offensive playmaker in wideout Davante Adams, whom they traded to the Las Vegas Raiders. The Minnesota Vikings have a new coaching staff. The Chicago Bears enter Year 1 of a rebuild under new general manager Ryan Poles and head coach Matt Eberflus with second-year quarterback Justin Fields.

Yes, the Lions have an inexperienced coaching staff that took over last year, but they can build on a 3-13-1 season.

When Dan Campbell took over as head coach and talked about biting kneecaps during his introductory press conference, people laughed at him, but he set the tone for the club on that day. Detroit will be a tough football team on his watch, which embodies the mentality of the Motor City.

After a close Week 5 loss to the Vikings, Campbell showed an emotional side that his players can respect and rally behind because of how much he cares about winning games.

An emotional Dan Campbell crying through his post game press conference: “When you see your players give all that they have and then you lose that way. It’s tough. You don’t want that for them. But we’ll be better for it.” https://t.co/bYMsh0efbW

In Week 13, the Lions hosted the Vikings and avenged an earlier defeat with a 29-27 victory—their first win of the season. Though Detroit’s poor final record slotted the team in the No. 2 spot for the 2022 draft, general manager Brad Holmes took advantage of a good position in the selection order and put together one of the league’s best rookie hauls.

The Lions’ incoming draft class will balance the roster and further solidify the team’s rugged identity.

With the No. 2 overall pick, Detroit selected Aidan Hutchinson. He’s a pro-ready edge-rusher and more refined than Travon Walker, who went No. 1 overall to the Jacksonville Jaguars, and Kayvon Thibodeaux, whom the New York Giants selected at No. 5 overall.

Hutchinson’s hand usage, counter moves and play recognition make up for his lack of flexibility. Nonetheless, because of his skill set, he has a chance to make an immediate impact as an every-down defender who can stand up or burst off the line from a three-point stance to rush the quarterback.

Beyond the first round of the draft, the Lions continued to bolster their defense, which allowed the second-most points in 2021. With the No. 46 pick, they added Josh Paschal, a versatile defender capable of lining up on the edge or inside. While he isn’t a dominant pass-rusher, the Kentucky product can break into the opponent’s backfield at a high frequency. The 6’3″, 268-pounder logged 5.5 sacks and 15 tackles for loss last year.

With Hutchinson and Paschal joining the team, the Lions can attack opposing offenses with a first, second and even a third wave of edge-rushers and defensive linemen. Charles Harris, a 2017 first-rounder, emerged as a playmaker last season, registering 7.5 sacks, 34 pressures and 10 tackles for loss. Romeo Okwara is only two years removed from a 10-sack campaign. His younger brother, Julian, recorded five sacks, 14 pressures and six tackles for loss in 2021.

Defensive coordinator Aaron Glenn can mix and match defenders on the edge and move them around the formation, which may give opposing quarterbacks nightmares. Detroit’s defensive front will garner a lot of attention, allowing its athletic linebackers to shoot gaps for coverage sacks and tackles behind the line of scrimmage.

Alex Anzalone leads the linebacker group. He can play on all three downs and allowed a 74.4 passer rating in coverage last year. Derrick Barnes needs to develop into a complete second-level defender, but he showed flashes, logging 67 tackles, four for loss and two sacks through 17 games (six starts). Jarrad Davis is a downhill defender who returned to Detroit via free agency.

“Despite his size and strength, he still finds ways to excel in the box. He plays with a hair trigger that is seldom wrong, allowing him to get the jump on run plays. Rodriguez is also quite comfortable playing tight to blocks and finding creative ways to slip blocks in congested areas, helping him overcome his deficiencies. He’s also mostly impressive in space. Though his change of direction can get ugly at times, he plays with good initial burst as well as long speed to chase to the perimeter.”

If the Lions develop Rodriguez into a starter, they’ll have a Day 3 gem who could shore up their linebacker unit.

While Detroit has a question mark on the boundary of the secondary opposite of Amani Oruwariye, who broke out with six interceptions and 11 pass breakups in 2021, we’ll likely see strong competition for the starting job with better coverage on the back end.

Jeff Okudah, the No. 3 overall pick from the 2020 draft, will have a chance to play up to his pedigree if he can stay healthy. As a 2021 third-rounder out of Clemson, Ifeatu Melifonwu has a chance to carve out a role on the perimeter. Detroit also added Mike Hughes, who’s a former first-rounder (2018) with starting experience.

Of course, in the NFL, most teams will only go as far as a quarterback takes the team. Though he’s often dismissed as a low-tier signal-caller, Jared Goff led the Los Angeles Rams to the playoffs in three out of four seasons as the primary starter before they traded him to Detroit last offseason.

With a strong supporting cast, Goff can lead a club to several wins. He has a stout offensive line and a handful of playmakers around him in Detroit.

In a surprising move on Day 1 of the draft, the Lions moved up for Jameson Williams, who caught 79 passes for 1,572 yards and 15 touchdowns in his final year at Alabama. The big-play receiver tore his ACL in the National Championship Game but expects to participate in training camp practices.

Once Williams suits up for live action, the dynamic pass-catcher will open up the middle of the field for Pro Bowl tight end T.J. Hockenson. Assuming wideout DJ Chark makes a full recovery from a fractured ankle, he can also threaten defenses vertically with his 4.34-second 40-yard dash speed.

In the meantime, Goff can build a stronger connection with wideout Amon-Ra St. Brown, who finished second and fifth among 2021 rookies in receptions (90) and receiving yards (912), respectively. He already has a strong rapport with wide receiver Josh Reynolds—the duo has played together through five seasons dating back to their time in Los Angeles.

Goff will also have time to pick apart defenses behind an offensive line that allowed a pressure rate of 23.2 percent (ranked 16th) in 2021. He should be under less duress if tackle Penei Sewell picks up where he left off last season and fellow tackle Taylor Decker goes into the 2022 campaign healthy.

Keep in mind that Detroit’s offensive line opened up holes for a ground attack that ranked 11th in yards per rush attempt (4.4) last year. Behind one of the league’s better five-man groups, running backs D’Andre Swift and Jamaal Williams can balance the offense.

Barring major injuries or setbacks, the Lions will win games at the line of scrimmage, but they’re capable of piling on points with a proven starting quarterback who now has a plethora of playmakers.

In 2021, Campbell laid the foundation for a gritty team that lost six games by one possession (eight points or fewer). The Lions will continue to bite a lot of kneecaps with their hard-nosed approach, but they’ll also take a significant leap in Year 2 under the current regime.

Denial of responsibility! NewsUpdate is an automatic aggregator around the global media. All the content are available free on Internet. We have just arranged it in one platform for educational purpose only. In each content, the hyperlink to the primary source is specified. All trademarks belong to their rightful owners, all materials to their authors. If you are the owner of the content and do not want us to publish your materials on our website, please contact us by email – [email protected]. The content will be deleted within 24 hours.
best sports newsDetroitLionsnews update sportsnewsupdateNFLsSleepersports news

In a Quiet Off-Season the Yankees Got Better — at Everything