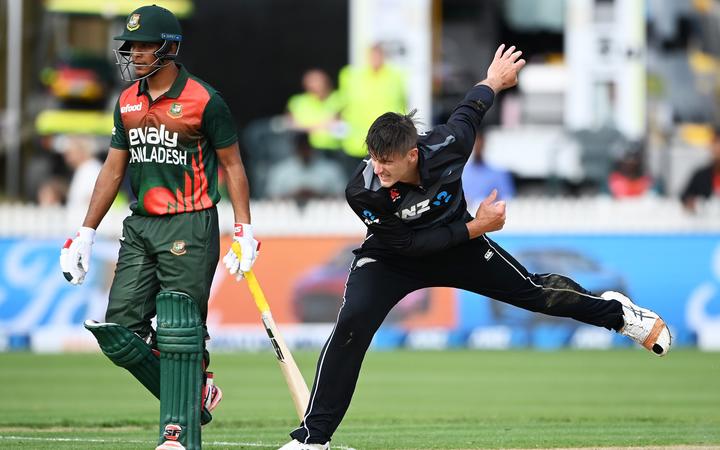 Twenty20 is by far the Black Caps’ weakest international format and, in normal circumstances, they might not figure in the finals’ permutations. But, as luck would have it, pitch conditions in the United Arab Emirates could hardly be better for the Black Caps.

New Zealand is an attritional cricket team. They’re not brilliant and don’t blow opponents off the park. The Black Caps are precise and methodical and workmanlike and they very successfully drag more talented teams down to their level.

If this T20 World were staged in other nations, on pitches that allowed explosive batsmen to clear fences with impunity, then New Zealand might well have been cannon fodder. But as we cast our eyes towards their tournament-opener against Pakistan, it’s hard not to feel as if the Black Caps will be there at the business end.

These are funny little tournaments. I was lucky enough to cover the 2012 and 2014 editions in Sri Lanka and then Bangladesh.

The pitches get tired and spinners can dominate, particularly in the first innings of night matches. Then dew suddenly descends and the team batting second often finds the ball comes on to the bat more easily as a result.

I remember a match in Chittagong in 2014, where New Zealand restricted Sri Lanka to a modest 119 batting first. All seemed in readiness for the Black Caps to win this sudden-death clash and progress through to the playoffs in Dhaka.

Instead they were bowled out for 60, with Sri Lankan left-arm spinner Rangana Herath recording the eye-watering figures of five for three off 3.3 overs.

New Zealand captain Brendon McCullum claimed afterwards that the ground had been sprayed with a dew-retardant, as his team bowed out meekly. Sri Lanka, meanwhile, went on to beat India in the final.

Assuming there’s no skulduggery of that nature this time, the Black Caps should do all right.

They have Pakistan, India and Afghanistan to contend with in their group, who will all be pretty well suited to the conditions too.

But, as we saw with New Zealand’s World Test Championship triumph over India, ego can sometimes be the downfall of better teams.

Players of prodigious talent don’t always like to graft or to look bad, particularly in Twenty20 cricket. They want to dominate.

Contrast that with the batters in New Zealand’s line-up. Devon Conway and Kane Williamson won’t have any trouble working hard for runs. They’ll be content to accumulate in ones and twos, if that’s what the situation demands.

Around them, Martin Guptill, Glenn Phillips and Tim Seifert might play a few more shots. Equally, all are capable of adapting to the circumstances as well.

Given the tournament venue, an argument could have been made for the inclusion of Ross Taylor. Time will tell if leaving him out was the best decision.

Much will depend on Lockie Ferguson’s form with the ball. He’s had an outstanding Indian Premier League season with the Kolkata Knight Riders and is a genuine wicket-taker.

Tim Southee has enjoyed a couple of good moments for KKR as well, but Trent Boult battled a bit with the Mumbai Indians. Kyle Jamieson hasn’t had any recent cricket with the Royal Challengers Bangalore, but is a proven international performer.

Adam Milne, who also played for Mumbai and was outstanding in The Hundred competition in England, is there as injury cover. Again, we’ll see if not fully including him was the right idea.

Spin bowling is often important at these events and this is where you feel New Zealand could struggle. Mitchell Santner has been an excellent white-ball bowler over the years, but Ish Sodhi and Todd Astle will need conditions to be absolutely in their favour if they’re to prove effective.

Phillips and Mark Chapman can bowl some spin too, if absolutely necessary.

Momentum often helps players and teams at this tournament, which is where James Neesham comes in. He’ll potentially have the unenviable job of bowling at the end of opposing team’s innings’ and then batting in the final overs of New Zealand’s one.

That can be a real hiding to nothing, but Neesham is an experienced and talented player who can get onto runs of terrific form.

All up, you couldn’t say New Zealand are tournament favourites. Defending champions the West Indies should be good again, England are the world’s No.1-ranked team and then there’s India and Pakistan.

Australia have never won this event and rarely even threatened to, frankly. That’s another one of the T20 World Cup’s little mysteries.

As for the Black Caps, they’ve become famed for their big-tournament temperament. The occasion and the circumstances are unlikely to overwhelm them and, if conditions suit, they should be in the semifinal reckoning.

In all honesty, it’ll just be nice to see this event not fall prey to any Covid-related problems and be successfully staged from start to finish.

Denial of responsibility! NewsUpdate is an automatic aggregator around the global media. All the content are available free on Internet. We have just arranged it in one platform for educational purpose only. In each content, the hyperlink to the primary source is specified. All trademarks belong to their rightful owners, all materials to their authors. If you are the owner of the content and do not want us to publish your materials on our website, please contact us by email – [email protected]. The content will be deleted within 24 hours.
Audiobest sports newsBlackCapsCupCurrent AffairsDarkformat