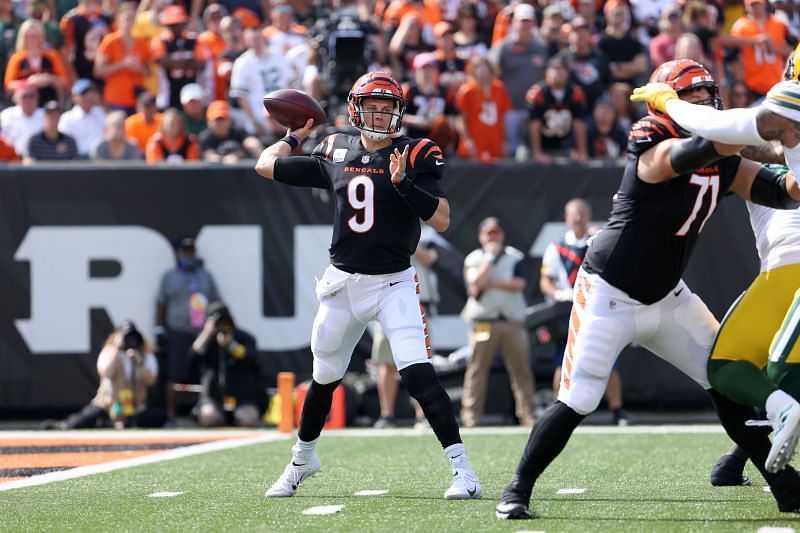 Why was Joe Burrow taken to hospital following game vs. Packers?

Cincinnati Bengals quarterback Joe Burrow suffered an injury in the second quarter against the Green Bay Packers. Burrow was hit in the leg by Packers linebacker De’Vondre Campbell on a quarterback scramble. Darnell Savage hit Burrow in the head, which caused him to be evaluated in the blue medical tent.

Burrow was evaluated for a concussion by team doctors. After just 12 minutes, Joe Burrow returned to the field for the Bengals. Ultimately, the Bengals came close to beating the Packers but lost 25 to 22 in overtime. After the game concluded, Joe Burrow was taken to a local hospital.

Bengals QB Joe Burrow is being taken a local hospital for a throat contusion, per a team spokesperson.

Bengals QB Joe Burrow is being taken a local hospital for a throat contusion, per a team spokesperson.

Burrow was taken to the hospital after the game for a throat contusion. No further details have been made public at the time of publishing. Burrow managed to play a good game despite dealing with the injury. Joe Burrow completed 28 passes of 36 attempts. He had two touchdowns, two interceptions and 281 yards.

Burrow is fortunate to have been able to return to the game after avoiding a potential concussion. He didn’t slide, which led to Savage delivering the hit. Burrow is coming off of a torn ACL that he suffered in Week 11 of the 2020 season.

Darnell Savage puts Joe Burrow in the medical tent. This is why you slide

Darnell Savage puts Joe Burrow in the medical tent. This is why you slide
https://t.co/ydYTRtZ9Mj

Joe Burrow has had moments of brilliance this season. In Weeks 1 and 4, Burrow threw for two touchdowns and no interceptions, however, he’s also been turnover-prone in big situations. He’s thrown six interceptions in five games. The Bengals will be holding their breath until they know more about the status of their franchise quarterback.

The Bengals can’t afford to lose Joe Burrow to injury

The last five games of the 2020 season showed just how poor the Bengals are without Joe Burrow. The Bengals backup quarterback is Brandon Allen, who started five games in place of Burrow last year.

In those games, Allen threw five touchdowns and four interceptions on 925 passing yards. The Bengals have one of the best wide receiver cores in the NFL. Tee Higgins and Tyler Boyd have been consistent NFL players.

Ja’Marr Chase has been a superstar rookie on offense this year. His chemistry with Burrow is exceptional. Going from Burrow to Allen is a downgrade for Chase, Boyd, and Higgins.

The Bengals face the 0-5 Detroit Lions next week. That’s a game they can win without Burrow. In Week 7, they face the Baltimore Ravens, so they’ll hope he can return sooner rather than later.

Denial of responsibility! NewsUpdate is an automatic aggregator around the global media. All the content are available free on Internet. We have just arranged it in one platform for educational purpose only. In each content, the hyperlink to the primary source is specified. All trademarks belong to their rightful owners, all materials to their authors. If you are the owner of the content and do not want us to publish your materials on our website, please contact us by email – [email protected]. The content will be deleted within 24 hours.
best sports newsBurrowCincinnati BengalsGameHospitalJoeJoe BurrowNews

CM Punk on how social media brought him back to wrestling

How to prepare your team to address a significant security…

IvyBackup review: Promising, open format, but not quite…

Yorkshire to take no disciplinary action in Azeem Rafiq…