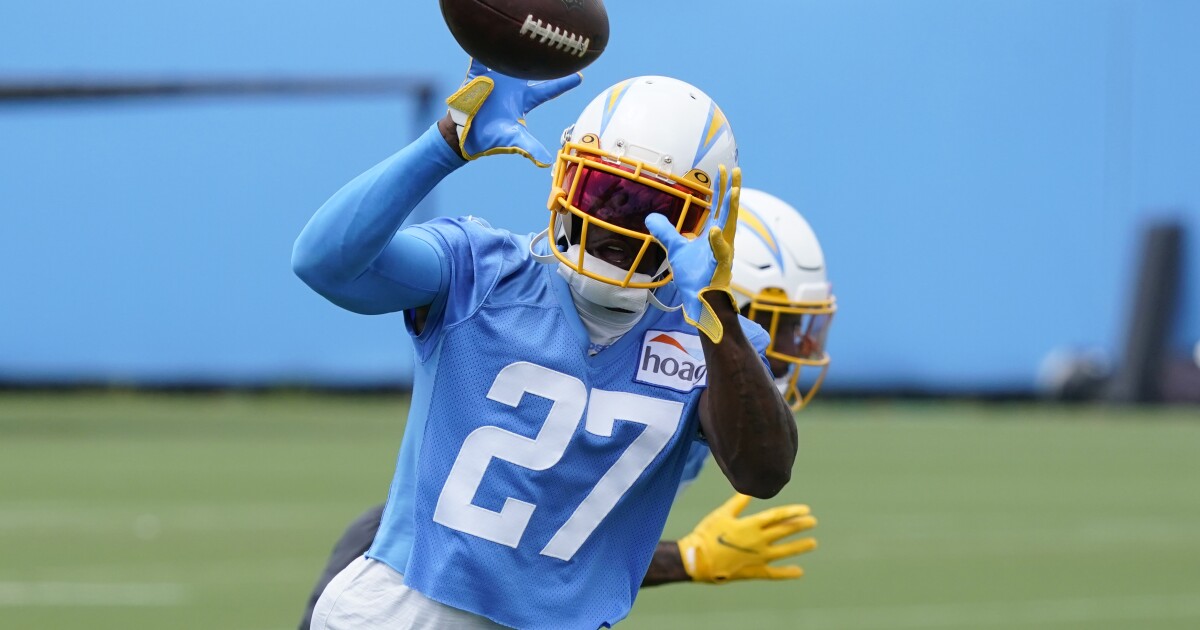 Through eight training-camp practices, there has been plenty to observe about Justin Herbert, the Chargers’ Pro Bowl quarterback entering his third season with near-limitless expectations.

One thing J.C. Jackson said he has noticed is that Herbert keeps throwing in the other direction.

Jackson laughed after sharing his observation and then added: “Herbert is a great guy. I love practicing against him. I can’t wait to see what he does this year.”

In March, the Chargers signed Jackson to a five-year contract worth up to $82.5 million with $40 million guaranteed. His 25 interceptions since 2018 are the most in the NFL.

Jackson had his first pickoff of camp Friday when he secured a tipped ball thrown by Easton Stick.

Jackson said he has never played with such an impressive duo coming off the edge. He suggested the presence of Bosa and Mack could allow him to further exploit his already elite skills.

“I believe I can make more turnovers having those two guys going at the quarterback,” Jackson said. “So that should be fun.”

The Chargers tied for 21st last season with 11 interceptions. Jackson had nine and eight interceptions, respectively, the last two seasons.

“There’s no pressure,” Jackson said when asked about his new contract. “I just feel more excited. … This is nothing new to me. You’ll see when the season starts what I’m going to bring to the table and to this team.”

As for Jackson’s observation about Herbert, defensive coordinator Renaldo Hill smiled and dismissed the idea that the Chargers’ quarterback was avoiding one side of the field.

“Justin’s confident, too,” Hill said. “So I don’t know if it’s that. J.C. is a big, physical guy. It’s a presence over there. But I don’t think Justin’s scared to throw the ball anywhere.”

The Chargers returned to practice after not being on the field Thursday. Some takeaways from their 90-plus minute session:

Denial of responsibility! NewsUpdate is an automatic aggregator around the global media. All the content are available free on Internet. We have just arranged it in one platform for educational purpose only. In each content, the hyperlink to the primary source is specified. All trademarks belong to their rightful owners, all materials to their authors. If you are the owner of the content and do not want us to publish your materials on our website, please contact us by email – [email protected]. The content will be deleted within 24 hours.
best sports newschargerscornerfieldHerbertJ.CJacksonsJustin

The King of Fighters XV Gets Crossplay in 2023, Samurai Shodown Getting Rollback Netcode