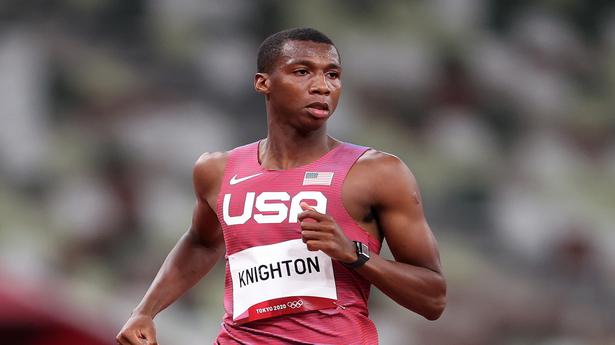 The 18-year-old American is quicker over 200m than the great Jamaican was at his age. But can he stay on course and threaten the sprint world records that until recently looked untouchable?

The 18-year-old American is quicker over 200m than the great Jamaican was at his age. But can he stay on course and threaten the sprint world records that until recently looked untouchable?

When Usain Bolt decided that he had had his fill of life in the fast lane, his position as the greatest sprinter of all time was unassailable.

Even the mere thought that somebody someday might approach the times he had set was ludicrous — Bolt, after all, was the perfect storm, a 6’5” physical freak with both a meticulously drilled running technique and the mental ability to command his best under pressure on the biggest occasions. His world records of 9.58s in the 100m and 19.19s in the 200m appeared forever beyond the reach of athletic endeavour.

And yet, within five years of Bolt’s retirement, the possibility — even if it’s just a sliver at the moment — of at least one of his marks coming under threat has opened up. The cause for this is a teenaged American who not too long back was considering a career in gridiron.

Less than three years ago, Erriyon Knighton was a wide receiver on the American football pitch at Tampa Hillsborough High School in Florida. A hot prospect scouted by several top American colleges with reputed gridiron programmes, Knighton had a path to the NFL mapped out.

But when the pandemic hit and team sports were restricted, the youngster turned his attention to sprinting, a passion he hadn’t explored seriously until then.

“I probably would still have been playing football if I would have had that extra year,” Knighton told the BBC. “I only started running track in the ninth grade. Before then you could have asked me what 100m was and I wouldn’t have known. I knew nothing about track. By the end of that year, I realised that I was kind of separated from the pack and faster than most people.”

Knighton wasn’t just “faster than most people” he was competing against; he was faster than anybody his age in history, including Bolt himself!

That performance elevated him to rarefied heights. He wasn’t just the fastest teenager of all time over 200m; he was now rubbing shoulders with the best to have ever done it.

The 18-year-old’s time blitzed those of sprint legends Carl Lewis and Tommy Smith, and placed him behind only Bolt (19.19), Yohan Blake (19.26) and Michael Johnson (19.32), making him the fourth-fastest man over 200m! What’s more, it was also the quickest season opener ever.

“If one junior [Bolt] in history, who is considered the greatest sprinter of all time, has broken 20 [seconds], and now this kid is half a second — which is a lifetime in the sprints — faster, then yes. It’s not an exaggeration to say that this is the most Beamon-esque junior performance that we have seen,” Boldon said.

In between his record-breaking runs, Knighton qualified for Tokyo and finished fourth in the 200m. Had he managed 19.49 back then, he would have beaten Andre De Grasse (19.62) to gold. “He’s very young and talented,” de Grasse said. “I definitely look forward to competing against him. He’s younger than me, hopefully I can compete with him a little bit longer.”

Silver medallist Kenny Bednarek and bronze medallist Noah Lyles, both in their early 20s and considered the future of American athletics themselves, hailed Knighton’s Tokyo showing.

“He’s going to be dangerous,” said Bednarek. “He’s got a lot of talent and a lot of things to work on, and he’s definitely going to be a monster.”

“I’m very proud of him,” said Lyles. “I believe he’s right down the road to even more amazing things.”

The comparisons with Both are inevitable. Knighton is 6’3” tall and thought to be still growing; his stride length and ability to turn his legs over quickly remind experts of the Jamaican, with Boldon going so far as to say that Knighton has better biomechanics than Bolt had at 18. There’s also the nonchalance: Knighton has shown he too can pose for the cameras as he crosses the finish line, with rivals trailing in his wake.

But is all this too much too soon? At the Prefontaine Classic in Eugene, where the World Championships will be staged in July, Knighton was given a reality check in the 100m, as he finished sixth, with a time of 10.14s, in a strong field led by Trayvon Bromell. It’s not his favoured event, but if the 18-year-old had any pretensions, they would have been swiftly depressed.

De Grasse and Carl Lewis, among others, have called for a lowering of expectations and urged Knighton to do things his way, without being weighed down by the pressure of chasing a ghost.

De Grasse, who knows a thing or two about pursuing Bolt, albeit unsuccessfully, advised Knighton not to “worry about being the next Usain Bolt”. “That puts a lot more pressure when people say that you’re the next Usain Bolt,” he said. “Just be you, have fun, enjoy the moment.”

Lewis also drew attention to the physical side of things. “The biggest thing is not rushing your age,” he said. “Instead of running five hard races a year as a high-schooler, you’re suddenly running every hard race in a year. He’s a phenomenal athlete but he doesn’t have to kill himself every week… you are physically not as strong at 18 or 19 as you will be at 21, 22.”

Knighton does seem aware of the big picture. He has his eyes set on the World Championships in Eugene (July 15-24) provided he qualifies (June 23-26) at the same venue, but he knows he has plenty of time to leave his mark on the grandest stages.

“I get called young every day, I am going to be 24 in 2028, that is in two more Olympics and still kind of young,” Knighton told the BBC. “I think about that all the time. As I grow older I am going to get stronger and faster. I am not the perfect 200m runner, I am still learning as I run it.”

Denial of responsibility! NewsUpdate is an automatic aggregator around the global media. All the content are available free on Internet. We have just arranged it in one platform for educational purpose only. In each content, the hyperlink to the primary source is specified. All trademarks belong to their rightful owners, all materials to their authors. If you are the owner of the content and do not want us to publish your materials on our website, please contact us by email – [email protected]. The content will be deleted within 24 hours.
best sports newsBoltKnightonLightningnews update sportsnewsupdatesports newssports update

Ground Divers looks like a fun twist on arcade-style digging