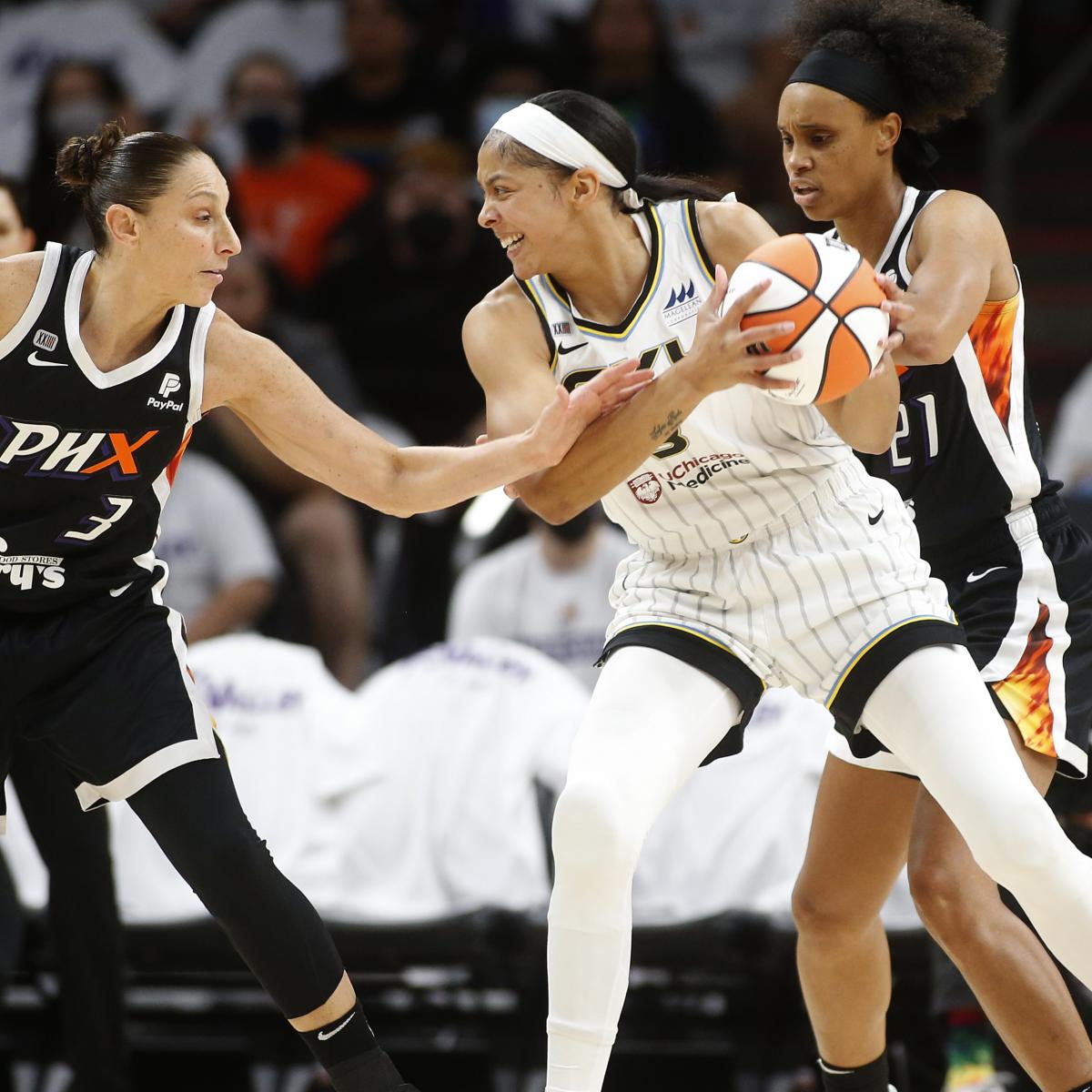 PHOENIX –– Courtney Vandersloot had to think long and hard about what life was like in 2014 when she was a fourth-year player competing in her first WNBA Finals. So much has changed—not only for her but for players in the league—since her Chicago Sky team took on the Phoenix Mercury seven years ago.

“I remember being here and nobody knew who we were,” she told B/R, regarding what she believes has changed most since her last finals. “(Now) you’re walking down this street and everyone’s saying, ‘Congrats, good game.’ I think outside of the arena our visibility, you know, our popularity (has grown).”

Veteran players returning to the Finals, such as Brittney Griner and Candace Parker, all believe exposure has gone way up.

The visibility of the league has led to more “crossovers,” #WNBATwitter’s term for an athlete from another high-profile league attending a WNBA game. Parker said she noticed more athletes from other leagues than ever in 2021, a notable change since her most recent Finals appearance in 2017. She referenced athletes from the Chicago Bears, Blackhawks and White Sox who have all worn Chicago Sky jerseys this season.

Over its 25-year history, the league’s growth hasn’t been linear, but rather incremental. Parker has some ideas about what’s needed to sustain that growth and continue the W’s upward trajectory.

“People fall in love with what we do in between the lines, but, like, knowing us off the court is super important,” Parker told B/R. “A lot of us go overseas, and I hope that we can, as the WNBA, really follow those stories and follow those players so we don’t just go black for six months out of the year.”

In her State of the League address on Sunday afternoon, Commissioner Cathy Engelbert acknowledged part of her mission is to ensure the W doesn’t just go dark after its 25th champion is crowned.

She also explained that the league’s key signs of progress come right from its television ratings. She said the WNBA “delivered its most-watched season since 2008” on its national broadcast schedule, which included TV partners such as ABC, CBS Sports Network, ESPN and ESPN2. Viewership rose 51 percent over 2020’s single-site Wubble a year ago.

“That was after we were one of the only sports leagues with double-digit viewership increases last year during the beginning of the pandemic,” Engelbert said.

The league is on what she refers to as a “five-year business transformation plan” to support that continued upward path.

The first: invest in the “digital product” to find fans where they are, predominantly on their phones. Since 2017, before Engelbert’s tenure began, the league has streamed games on Twitter. Engelbert extended this deal through the 25th season, and the partnership with the social media giant has only continued to flourish with the creation of official hashtag emojis for all of the 12 teams and even for the league’s online community, #WNBATwitter.

Last week, Twitter unveiled a new commercial that highlighted the W as a movement, and the ad has now amassed over 21 million total views. (Full disclosure: The ad featured B/R and HighlightHer’s Ari Chambers.)

In 2020, the league signed a new deal with ​​Oculus from Facebook, a leading virtual reality platform. Over the past two seasons, Facebook Watch has streamed 40 games. In the league’s 25th season, it added tech giant Google to its growing list of marquee corporate sponsors, known as WNBA Changemakers. YouTube TV is the official sponsor of the 2021 WNBA finals and has been since 2018.

While the league just signed a retail partnership with Dick’s Sporting Goods, merchandising remains an underdeveloped as-yet-realized opportunity. The Sky’s Allie Quigley told B/R that she’d love for her family to visit the Sky’s Wintrust Arena and simply buy her jersey, but they currently cannot.

Showcasing the league at its best will be critical to the future success of the W. This includes making sure WNBA All-Star games happen every year, not just non-Olympic years.

There’s also the Commissioner’s Cup, instituted this year. Despite its ambitious intentions, players and media didn’t initially understand its purpose and goals.

But looking ahead, there is an understanding that the WNBA playoff format needs to change and expand, leaving single-elimination behind, which will allow for more complete playoff stories to be told and for new rivalries to be born.

A league source told B/R that this has been an ongoing project for two years. Despite a regular-season schedule that fluctuates due to Olympic years and World Cup competitions, a change to the two-round single-elimination format is on the horizon.

Expansion also is necessary for both the league’s literal and figurative growth. In a league where first-round draft picks aren’t making WNBA rosters, and a country where there is more women’s basketball talent than ever before, the W is in desperate need of more teams and geographic representation.

Mercury center Brittney Griner even lobbied for the Houston Comets to return to the league.

“Bring the Comets back,” she said. “You got a team there that won four championships in a row. Why aren’t they still there?”

And third in Engelbert’s five-year business transformation plan is the league’s commitment to diversity, inclusion and the activity of its player-led social justice council. Since the last time these teams met, players have noticed more of an openness to embracing the league’s own diversity and its own brand of social activism. “I think we shifted as a league to be more into, obviously, social activism. It’s been a huge thing that has changed,” Quigley said.

“These players command other social-justice leaders in society to actually come talk to them about their strong voices and what change they want to see,” Engelbert responded when asked on Sunday about the accomplishments of the W’s player-led social justice council. The council,  which was founded in 2020, helps organize and lead the players in actionable items to elicit social and political change around the country.

But back to Parker’s wish. How can the WNBA make sure it doesn’t go black for many months once the finals conclude and a champion is crowned? How does the league make sure it can continue to create more opportunities for storytelling in its half-a-year of an offseason?

This is something the W has begun to tap into. Over the past two winters, we’ve seen more player movement in free agency than the league had in virtually its five previous seasons. The 2020 CBA created more room for player movement, leading to more offseason chatter and more player storylines.

On Tuesday, the player-driven women’s sports organization Athletes Unlimited announced the creation of a new professional women’s basketball league stateside that will not conflict with the W’s season. But is that enough?

Many questions remain. How can continued investment in its digital product lead to even more growth? How can changing the playoff structure benefit the league in the long term? How is expansion rather than reduction now finally on the horizon?

And how has the league used its core belief in diversity and inclusion as a way to reach more of its fanbase? These are the questions the WNBA’s league office should be asking and answering this coming offseason.

Denial of responsibility! NewsUpdate is an automatic aggregator around the global media. All the content are available free on Internet. We have just arranged it in one platform for educational purpose only. In each content, the hyperlink to the primary source is specified. All trademarks belong to their rightful owners, all materials to their authors. If you are the owner of the content and do not want us to publish your materials on our website, please contact us by email – [email protected]. The content will be deleted within 24 hours.
best sports newsciteFinalsgrowthkeyloomnews update sportsnewsupdate

Want to see an Indian play in Bundesliga in the future: Bundesliga International CEO Klein