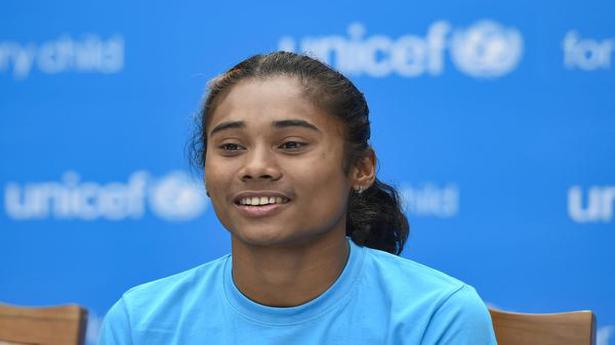 The Indian women’s 4x100m relay team will make its World Athletics Relays debut at the Silesian Stadium at Chorzow, Poland, on May 1 and 2.

The Athletics Federation of India announced a 20-member team (4x100m and 4x400m) for the World Relays on Tuesday and it will be the first international event for the sprinters after the 2019 Asian championships in Doha.

Kiran Pahal, who came into prominence with an impressive 52.73s as a 19-year-old at the 2019 National Open in Ranchi and who who had consistently finished second behind M.R. Poovamma in the recent Grand Prix meets, will be making her debut in the women’s 4x400m team.

“We are excited to get our athletes ready for their first international competition after the COVID-induced gap. We are glad the team will spend time in training in Turkey before it reaches Chorzow for the World Relays,” said Adille Sumariwalla, the AFI president.

“With Dhanalakshmi emerging on the scene in the Federation Cup last month, she and Dutee Chand are two Indian runners who have clocked sub-11.50 this season.

“We believe the 4x100m women’s team with Dhanalakshmi, Dutee, Hima Das and Archana Suseendran can come up with a good effort.”

Denial of responsibility! NewsUpdate is an automatic aggregator around the global media. All the content are available free on Internet. We have just arranged it in one platform for educational purpose only. In each content, the hyperlink to the primary source is specified. All trademarks belong to their rightful owners, all materials to their authors. If you are the owner of the content and do not want us to publish your materials on our website, please contact us by email – [email protected]. The content will be deleted within 24 hours.
4x100mathletic eventsAthleticsathletics newsbest sports newsChand and S. Dhanalakshmidebuthima das