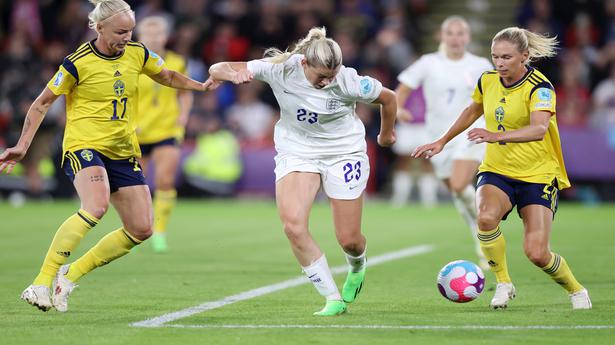 Women’s Euro | England sweeps past Sweden to make the final

England beat World No. 2 Sweden 4-0 in the semifinal of the UEFA Women’s 2022 Euro, and will face either Germany or France in the final on July 31

England beat World No. 2 Sweden 4-0 in the semifinal of the UEFA Women’s 2022 Euro, and will face either Germany or France in the final on July 31

England is heading back to Wembley Stadium for a European Championship final. This time it’s the women’s team going for the title.

Sealed with an impudent back-heeled goal by Alessia Russo, England swept past Sweden with a 4-0 win on Tuesday in the first Euro 2022 semifinal match.

Germany or France awaits in Sunday’s final — they play on Wednesday — and the winner will be taking on a host team that has captured the imagination of a nation. Just like England’s men’s team did last summer at Euro 2020, when it got to the final at Wembley but lost in a penalty shootout to Italy.

“Football’s Coming Home” — English soccer’s anthem — was sung by the excitable home fans in the crowd of 28,624 at Bramall Lane in Sheffield in the final minutes of what proved to be a one-sided match as England reached the final of a European Championship for the third time, after 1984 and 2009. England lost both times and has never won a major international tournament.

The Swedes, ranked No. 2 in the world behind the United States, were supposed to represent England’s toughest test of the tournament but they had no answer to the attacking power of Sarina Wiegman’s team.

Or its brilliant finishing.

“This result will go all over Europe and the world,” Wiegman said. “It was such a performance that, tomorrow, everyone will talk about us.”

Beth Mead scored her tournament-high sixth goal to set England on its way, controlling Lucy Bronze’s cross from the right and shooting home first time on the turn from 10 yards (meters) in the 34th minute.

Mead is only the second player to score six goals at a single Women’s Euros, after Germany’s Inka Grings in 2009.

Bronze, England’s right back, scored herself in the 48th with a far-post header from a left-wing corner, the ball going through two pairs of legs and past late-diving goalkeeper Hedvig Lindahl.

The third goal was the best of all and summed up the confidence coursing through this England team.

Russo — just on as a substitute — had a close-range shot saved but gathered the rebound and, facing away from goal, produced a cheeky backheel that went through the legs of the 39-year-old Lindahl.

Fran Kirby added the fourth through a chip from the edge of the area that Lindahl got both hands to but couldn’t stop the ball rolling into the net.

“I don’t think we started the game well but still we found a way,” said Wiegman, who was coach of the Netherlands team that won the Euros in 2017.

The match could have been different had Sweden taken a couple of early chances, the first falling to Sofia Jakobsson after barely 20 seconds but Mary Earps made a save with her left foot.

Then, in the 11th minute, Stina Blackstenius headed against the crossbar from only a few yards out at a corner.

England survived, worked out how to really hurt Sweden — primarily down the flanks — and didn’t look back.

The Swedes, the European champions in 1984, were looking to reach their first final since 2001 and fifth in total.

Instead, they are going home and it is England heading to the final, thrilling a nation that has fallen for its entertaining women’s team that has scored 20 goals this tournament — nine more than any other country.

Denial of responsibility! NewsUpdate is an automatic aggregator around the global media. All the content are available free on Internet. We have just arranged it in one platform for educational purpose only. In each content, the hyperlink to the primary source is specified. All trademarks belong to their rightful owners, all materials to their authors. If you are the owner of the content and do not want us to publish your materials on our website, please contact us by email – [email protected]. The content will be deleted within 24 hours.
2022 euroalessia russo goalbest sports newsenglandEngland vs swedenEurofinalfootball news