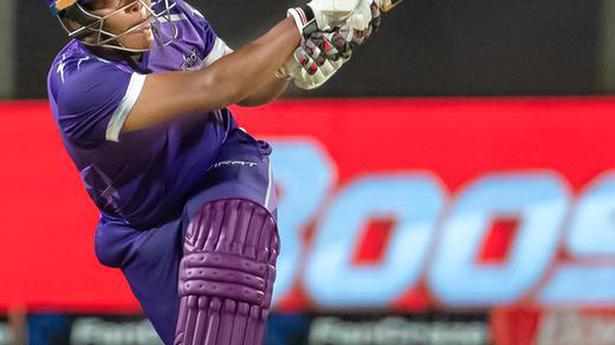 Kiran Navgire went down on her right knee and slog-swept the fuller ball, from outside the off-stump, over the deep mid-wicket for a six. It was the first-ever ball she was facing outside domestic cricket.

She indeed did a Suryakumar Yadav, and went on to do more, her blistering 69 off just 34 balls (5×4, 5×6) taking Velocity to the final of the Women’s T20 Challenge.

Though Velocity could not chase down Trailblazers’ 190 for five, the highest score in the tournament’s history, its final score of 174 for nine was enough to improve its net run-rate and clinch a place in Saturday’s final in which it will take on Supernovas.

Velocity’s target, in fact, was 159, which was achieved with 10 balls to spare. Defending champion Trailblazers thus went out of the tournament despite its 16-run victory as it failed to contain the storm that Kiran was.

She was the new player that everyone wanted to watch most in this tournament. On Thursday night at the MCA Stadium, she proved that all the hype about her wasn’t undeserving.

The Maharashtra-born 27-year-old had demanded attention when she cracked an unbeaten 162 off 76 balls for Nagaland against Arunachal Pradesh at the Senior Women’s T20 tournament last month.

On this night, Kiran gave the Trailblazers attack, featuring international bowlers of repute, just about as much respect as she had given to those hapless ones from Arunachal. She also hit the fastest fifty, off just 25 balls; she reached there with a six of course.

It was a display of brutal power, the kind of which one wouldn’t find too often in women’s cricket. It was fearless hard-hitting.

By the time Kiran was stumped by Richa Ghosh off Sophia Dunkley, she had virtually booked her team the ticket for the final. Nobody else reached 30 for Velocity.

Denial of responsibility! NewsUpdate is an automatic aggregator around the global media. All the content are available free on Internet. We have just arranged it in one platform for educational purpose only. In each content, the hyperlink to the primary source is specified. All trademarks belong to their rightful owners, all materials to their authors. If you are the owner of the content and do not want us to publish your materials on our website, please contact us by email – [email protected]. The content will be deleted within 24 hours.
best sports newschallengefinaljemimah rodriguesKiranKiran Navgirenews update sportsnewsupdate

Google’s foldable Pixel phone is not coming anytime soon, has been postponed to 2023- Technology News, Firstpost