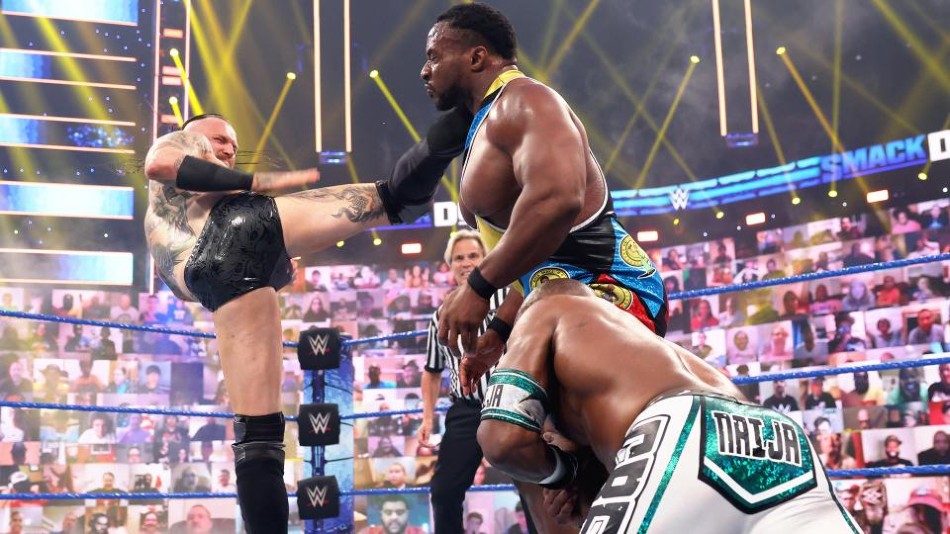 Check out the results and recap of SmackDown after WrestleMania Backlash:

– SmackDown kicked off with Sonya Deville mentioning that WWE will be leaving their Thunderdome facility on July 16th with fans returning for the live events from that date onwards.

Sonya then introduced all the Champions from the blue brand. Paul Heyman gave proxy for Universal Champion Roman Reigns as he isn’t just a titleholder like the rest of the champs. He will come out when he feels like doing it.

Bayley interrupted saying that she carried WWE during the Thunderdome era while also Dominik Mysterio, Natalya, and Tamina Snuka. Bayley also accused Bianca Belair who apparently cheated her way for a win at WrestleMania Backlash. Nia Jax and Shayna Baszler joined Bayley as they went after Natalya and Tamina and to set up a Six-Woman Tag Team Match.

– In the opener of SmackDown Bayley, Nia Jax and Shayna Baszler defeated SmackDown Women’s Champion Bianca Belair and WWE Women’s Tag Team Champions Natalya and Tamina. Baszler sent Tamina to the floor while Bayley dropped Belair with a Bayley-to-Belly suplex on the floor.

Natalya prevented Bayley from coming back to the ring as Baszler took advantage of the situation by applying the Kirifuda Clutch on Nattie for the submission victory.

– Aleister Black read the next chapter of his book mentioning that it was time to cull the herd. Big E featured in a backstage interview where he promised to win the Intercontinental Champion in the Fatal-4-Way match, later the night.

– King Corbin came out and called out Shinsuke Nakamura for a match that went underway right there. Before the match, Rik Boogz (Rik Bugez/ Eric Bugenhagen) from WWE NXT made a surprise appearance, playing an electric guitar.

He said that he’s here to rock with the real king of SmackDown, Shinsuke Nakamura. Boogz distracted Corbin after he rocked Nakamura with a Deep-Six. Nakamura took advantage of this as he stole the win with a small package.

– Sonya Deville announced The Street Profits – Montez Ford and Angelo Dawkins vs. The Uso Twins for next week’s SmackDown as Jimmy Uso mentioned that he and his brother Jey are ready to be back in tag team action.

– Universal Champion Roman Reigns then called out Jimmy Uso to the ring, but Cesaro came out instead. Cesaro wanted to compete against Roman in a rematch at the Hell In A Cell PPV, but got was attacked from behind by Seth Rollins, again.

The SmackDown Savior targeted Cesaro’s injured arms from Backlash to gain the upper hand. He jumped over the barrier, ran back over to the bottom of the ramp delivered a devastating Stomp to Cesaro on the steel. The Swiss Superman had to be stretchered out of the arena after the vicious attack.

– One half of the SmackDown Tag Team Champions Dominik Mysterio defeated Robert Roode in a singles encounter. Dominik sent Roode shoulder-first into the ring post to hit a 619. Dominik went to the top and connected with the Frogsplash for the pin to win.

– Jey Uso wasn’t happy about Jimmy Uso booking him in a tag team match against The Street Profits next week without consulting with him. He informed the same to Roman who said that Jimmy had become selfish. He needs to understand that everything the two of them do is to represent their family.

– Apollo Crews (c) defeated Big E, Kevin Owens, and Sami Zayn in a Fatal-4-Way Main Event Match to retain the Intercontinental Championship on SmackDown.Sami dropped Owens on the floor but E took him out with a Uranage. E hit Crews with a Big Ending but Commander Azeez made the save.

E then sent Azeez to the ring post and re-entered the ring but the lights suddenly got deemed as Aleister Black made his return. A Black Mass connected to E as Crews hooked the leg to get the pinfall win to retain. Black stood, calmly in the ring as Crews celebrated his big victory to end this week’s SmackDown.

Denial of responsibility! NewsUpdate is an automatic aggregator around the global media. All the content are available free on Internet. We have just arranged it in one platform for educational purpose only. In each content, the hyperlink to the primary source is specified. All trademarks belong to their rightful owners, all materials to their authors. If you are the owner of the content and do not want us to publish your materials on our website, please contact us by email – [email protected]. The content will be deleted within 24 hours.
best sports newsFridayhighlightsnews update sportsnewsupdateNightresultsSmackdown

A budding talent with promise