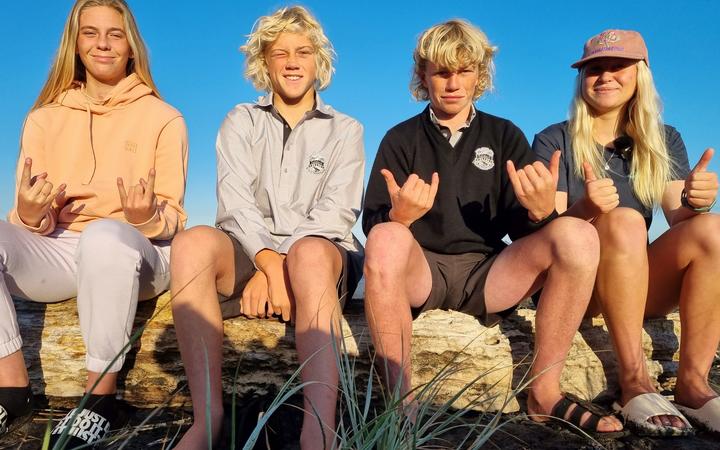 Four Taranaki teenagers are hoping to carve up the opposition at the world junior surf champs in El Salvador this month.

Part of a 12-strong New Zealand team, the so-called Taranaki Grom Squad say they are “stoked” to be taking on the world’s best.

The ISA World Junior Surfing Championships are being held for the first time since 2019.

Natasha Gouldsbury competed that year and the 17-year-old is back for more.

Her mates – and joining her on the world stage – are Kalani Louis, Spencer Rowson and Skylar McFetridge.

It will be 15-year-old Rowson’s first time out of the country.

“I’m pretty excited but pretty nervous too though.”

McFetridge is competing in the Under-16 division and she is not shy on her aims.

“Hopefully I’ll win it or get in the finals. That’s my goal or to do my best in all the heats I do.”

She was pretty sure who to thank too if she did win – their families.

“It’s amazing how they put all their time and effort into us and coach us to the best we can be and all the comps that we do and to support us and the time they take off work because they don’t get paid for this.”

Louis’ dad, Mark, said the break since the last competition had allowed the Taranaki Grom Squad to be formed.

“It came about from needing a focus so the kids were pulling together and putting more effort into what they’re doing rather than just going surfing, working on technique, working on physical fitness.”

He said fellow dads Kane Rowson and Paul McFetridge put in the hard yards with the youngsters.

“Training a few days a week like physical training and going over video footage and what not and then actually physically surfing. I don’t know how many hours they surf, it’s ridiculous, a lot of hours surfing.” 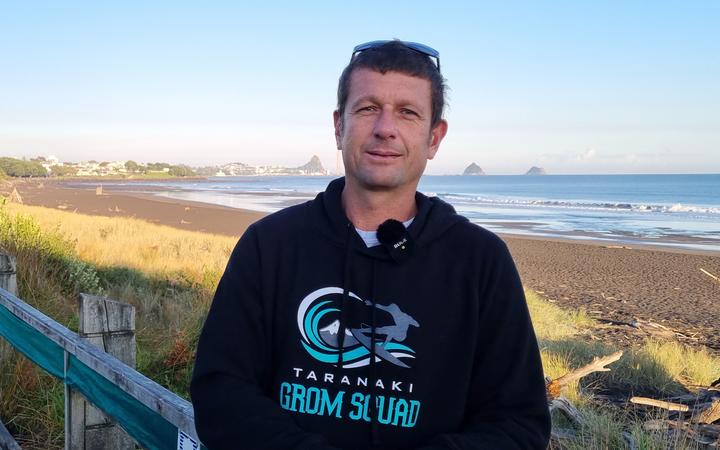 Mark Louis is impressed with the teenagers’ dedication to their sport.
Photo: RNZ / Robin Martin

Mark Louis, who will travel with Kalani to El Salvador, said hearing the 17-year-old had been chosen to compete in the Under-18 boys division was mind-blowing.

“What an opportunity, it’s like your kid making the All Blacks I guess, an early age grade All Black team or something like that. Yeah, it’s pretty cool.”

About 370 competitors from more than 40 nations are set to compete at the 18th edition of the Junior Worlds in Under-18 and Under-16 boys’ and girls’ divisions.

The Taranaki Grom Squad teens have raised $10,000 each to get to El Salvador.

Kalani Louis hoped their efforts would inspire the next generation of micro groms.

“Definitely when I was younger some of the guys like Tom Butland I definitely looked up to cause I saw them going away to heaps of comps and it made me want to do it as well.

“So, hopefully since four of us are going a couple of boys and girls will look and see us and aspire to do what we’re doing as well.”

The ISA World Junior Surfing Championships will be held from 27 May to 5 June.

Denial of responsibility! NewsUpdate is an automatic aggregator around the global media. All the content are available free on Internet. We have just arranged it in one platform for educational purpose only. In each content, the hyperlink to the primary source is specified. All trademarks belong to their rightful owners, all materials to their authors. If you are the owner of the content and do not want us to publish your materials on our website, please contact us by email – [email protected]. The content will be deleted within 24 hours.
Audiobest sports newscatchchampsCurrent AffairsNewsnews update sportsnewsupdate

BTG’s GOLDEN CATCH™ SLOT WILL HAVE YOU REELING