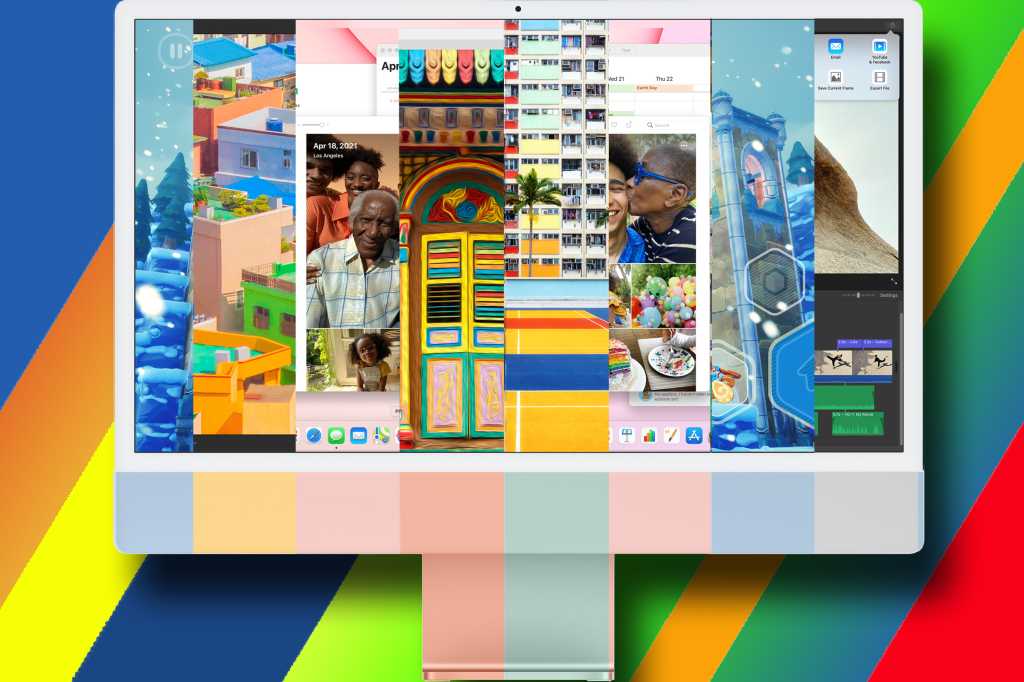 24-inch M1 iMac: Spend a little extra to get a lot more

Apple’s new M1 iMac is finally on sale and we totally understand that you want to buy one. It’s easily Apple’s coolest desktops in years, but choosing which one to buy is about more than just picking your favorite color. So follow our guide and spend your money wisely.

Before we start getting into the differences, let’s take a look at the features that are the same on all three models of the 24-inch iMac.

All of the iMac models have the same all-in-one design, measuring 21.5 x 18.1 x 5.8 inches and weighing about 10 pounds, which is quite impressive for such a powerful desktop PC. But the color options are different, with the higher configurations getting a few extra options.

The $1,299 iMac 24” has one fewer GPU core than the other two models. To get an idea of how the 7-core and 8-core GPU compare, let’s take a look at benchmarks from the MacBook Air review by Macworld U.K. They tested both the $999 MacBook Air with a 7-core GPU and the $1,249 MacBook Air 8-core GPU. Here’s how the Geekbench test results compare.

OpenCL and Metal are frameworks that are used to render graphics. These tests show how fast each GPU can perform. The 8-core GPU shows a 10 percent increase over the 7-core GPU in Geekbench’s OpenCL test. With Metal, the improvement is 8 percent. Keep in mind that these are benchmark tests designed to stress out and make heavy demands of the GPU, so while you may notice a slight difference if you’re playing an action-packed video game, when it comes to everyday use—web browsing, email, editing your photos, etc.— you won’t notice the difference at all.

Our pick: You’re getting a great chip and solid graphics performance no matter which model you buy, so the GPU shouldn’t be the overwhelming factor when deciding which 24-inch iMac to buy.

All three 24-inch iMac models have two Thunderbolt/USB 4 ports. However, that’s all you get on the $1,299 model. The $1,499 and $1,699 models also have a pair of USB 3 ports, which will be useful if you have a few peripheral devices to connect. None of the iMac models have any USB-A ports, which is a bummer, but they all have a headphone jack on the left side.

Our take: Obviously, if you are only connecting one or two items to your Mac, two ports will suffice. But two ports on a desktop machine are extremely limited, so you’ll likely need to invest in a Thunderbolt hub, a device that is essentially a box that has several different ports on it, acting as an adapter for your devices. For example, we reviewed the Corsair TBT100 Thunderbolt 3 Dock ($250), that you could connect to the iMac’s Thunderbolt port, and it will then provide you with two USB-A ports, two USB-C ports, a gigabit ethernet connector, two HDMI video jacks, and an SD card slot. If you just need more USB-C ports, we love the OWC Thunderbolt Hub, which adds two extra Thunderbolt 4 ports and a USB-A port.

The 24-inch iMac has the usual storage upgrades, going up to 2TB on the higher configurations. Apple hasn’t divulged pricing information yet, but we can assume $200 per 512GB of storage based on Apple’s current matrix.

Our pick: With cloud storage (iCloud, Dropbox, Box, OneDrive) becoming more prevalent, a 256GB SSD will probably be enough for most people. Content creators who deal with large files will want more onboard storage, which means they’ll probably want to upgrade to one of the higher models anyway.

Most people are using Wi-Fi connections to a network and the internet, but power users will prefer a wired connection with an ethernet port to ensure top speeds and low latency. The 24-inch iMac doesn’t have a gigabit ethernet jack on it per se, but you do get one on the power adapter. As you can see below, Apple moved the port to the power brick, as you can see below. That ethernet-equipped adapter doesn’t come with the $1,299 24-inch iMac, however. You can opt to get one, but it’ll cost an extra $30.

Our pick: The Ethernet power adapter is a cool solution to eliminate desktop cable clutter, but you’ll need to spend $30 on top of the $1,299 iMac to get an Ethernet port. So if you really need wired internet, you’ll probably want at least some of the other features on the $1,499 model too.

Touch ID is finally on a desktop Mac! Apple made a super-cool keyboard specifically for the 24-inch iMac in seven colors to match every hue that is with Apple’s fingerprint sensor in the top right corner. With Touch ID enabled, any time you need to enter a password, a prompt appears and you simply lay your finger on the Touch ID button to authenticate.

However, the Magic Keyboard with Touch ID is only available on the $1,499 and $1,699 models. However, the $1,299 model does not include Touch ID, which is a bummer. Instead, it has a standard wireless Magic Keyboard that can be upgraded to a Touch ID keyboard for a $50 fee.

Our pick: We’re big fans of Touch ID on our MacBooks, so we definitely recommend getting it, whether you pay extra or jump to the $1,499 model. However, while a $50 fee isn’t a huge expense, it represents 25 percent of the difference between the low-end iMac and the middle option. So you might want to just spring for the higher model.

It’s nice that the 24-inch iMac starts at the same $1,299 as it did before, but with just a $200 difference between it and the next model, we’d recommend saving up for the higher-priced one. The $1,499 24-inch iMac has the right combinations of features for the price: You get a total of four ports for connecting cables and devices, the Magic Keyboard with Touch ID, gigabit ethernet, more color choices, and a little bit of a boost with graphics processing. If you want Touch ID and Ethernet, you’ll need to add $80 to the price of the iMac, so you’re only saving $120. We think that money is well spent on the higher model.

Roman has covered technology since the early 1990s. His career started at MacUser, and he’s worked for MacAddict, Mac|Life, and TechTV.

Denial of responsibility! NewsUpdate is an automatic aggregator around the global media. All the content are available free on Internet. We have just arranged it in one platform for educational purpose only. In each content, the hyperlink to the primary source is specified. All trademarks belong to their rightful owners, all materials to their authors. If you are the owner of the content and do not want us to publish your materials on our website, please contact us by email – [email protected]. The content will be deleted within 24 hours.
24inchbest technology newsextraiMaclotnews update technewsupdateSpend

How to port Reliance Jio Postpaid to Prepaid for free – Smartprix