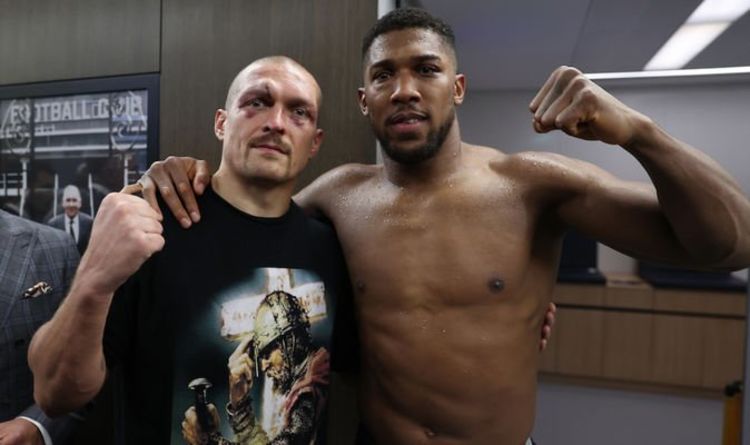 Anthony Joshua has spoken for the first time after losing his world titles with defeat to Oleksandr Usyk on Saturday night. Joshua did not give an interview in the ring post-fight but has now broken his silence on social media.

The Briton, 31, was convincingly outboxed in north London by the unbeaten Usyk and suffered the second loss of his professional career as a result.

Joshua is now expected to activate an immediate rematch clause in the contract to try and reclaim his belts from the Ukrainian, who was the former undisputed king of the cruiserweight division.

And posting a picture from what appeared to be his dressing room at the Tottenham Hotspur Stadium, Joshua wrote: “Keep positive even if the world’s crumbling in front of you! London I love you & thank you each and every time!”

AJ fought mandatory challenger Usyk after seeing a classic fight with fellow Brit Tyson Fury collapse but was outclassed on the evening.

Hearn confirmed that Joshua was taken to hospital afterwards due to a possible broken eye socket, with Joshua’s left eye sporting swelling.

He also told Sky Sports Box Office: “He’s devastated, already talking about training again. They want to look at the eye socket, he says it’s fine. But you know, a devastating defeat.

“Congratulations to Oleksandr Usyk, what a fighter. Put in a great performance tonight and the better man won.

“The fighter in AJ, he’s already talking about, ‘I’ll win the rematch, I’ll win the rematch.’ It was a tough defeat. I had it reasonably close in the eighth or ninth then Usyk just ran away with it, I thought 8-4, even 7-5 the best scenario.

“Usyk was the deserved winner and Joshua has got to make changes in the rematch because if that happens again, of course he’ll get beat. He’s got to impose himself early.

“It’ll be really difficult because Usyk’s confidence will be sky high. When you get to the level of Joshua, as we saw after the Ruiz defeat, there’s no 10-round comeback fights or warm-ups, you’re straight back in.

“He’ll want to go straight back into that rematch. He’ll be an underdog but that’s what he does. He was beaten by the better man.”

For the latest news and breaking news visit: /sport/football

Denial of responsibility! NewsUpdate is an automatic aggregator around the global media. All the content are available free on Internet. We have just arranged it in one platform for educational purpose only. In each content, the hyperlink to the primary source is specified. All trademarks belong to their rightful owners, all materials to their authors. If you are the owner of the content and do not want us to publish your materials on our website, please contact us by email – [email protected]. The content will be deleted within 24 hours.
22wordAnthonybest sports newsbreaksCrushingJoshuaLossmessage

No. 9 Clemson Upset by Unranked NC State in 2OT as Tigers Fall to 2-2