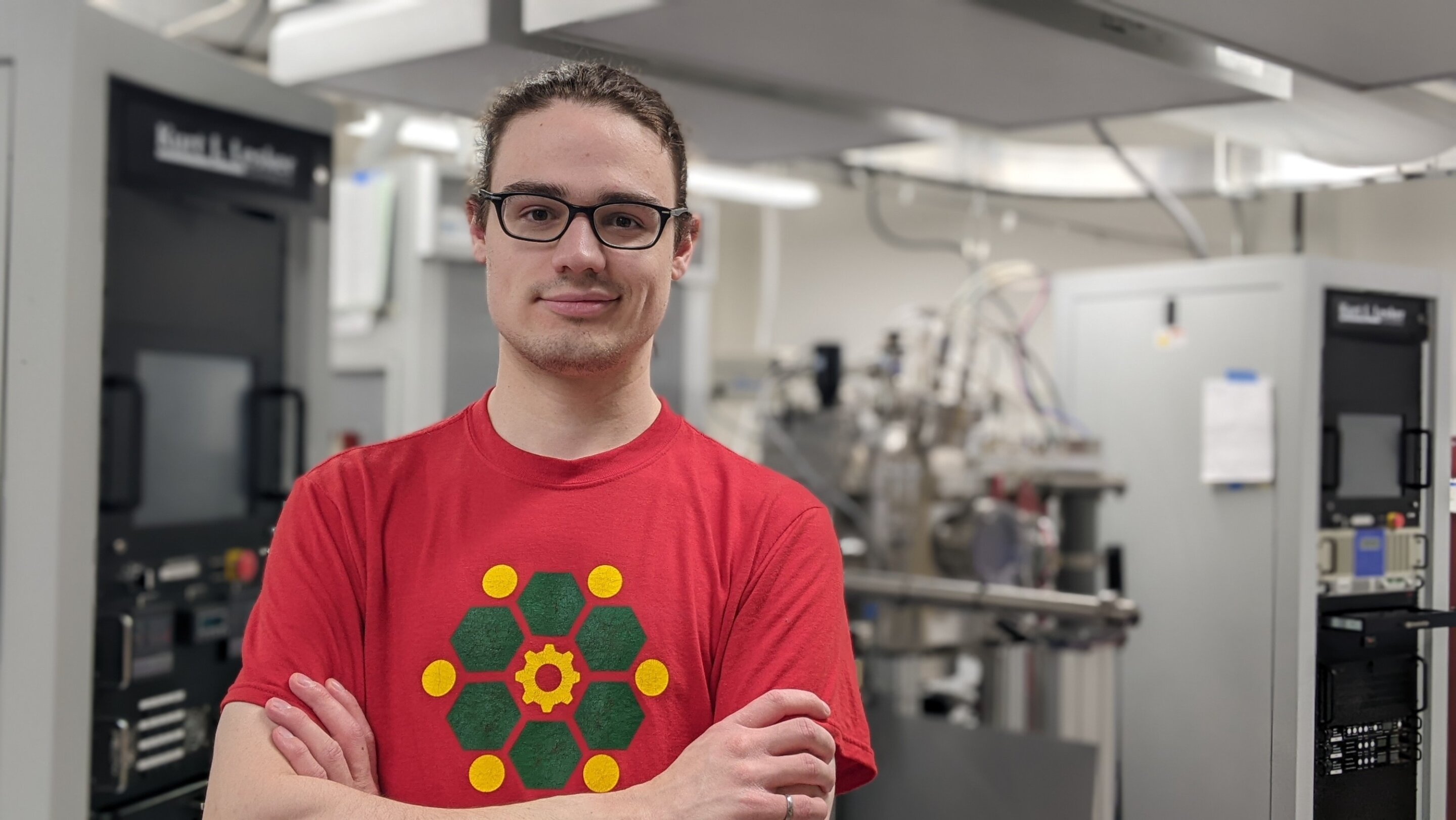 Batteries do the heavy lifting to store excess solar energy on power grids for use after sundown, but to operate, they also rely on pricey elements like platinum.

University of Alberta researcher Matthew Labbe would rather leave the precious metals to the jewelers, by using cheaper materials to tweak a disposable battery commonly used in hearing aids.

Known as a zinc-air battery, the long-lasting device has much bigger potential, said Labbe, a Ph.D. candidate in the Faculty of Engineering.

“Zinc-air batteries could really excel at reducing the cost of storing renewable energy, and that could also apply to electric vehicles and even portable electronics.”

They have several advantages over the lithium-ion version, he noted.

Using low-cost zinc metal and oxygen to produce electricity, the battery is inherently affordable, can store more energy and is safer than flammable lithium-ion batteries.

The challenge is finding a cheaper alternative to the fine, high-performance metals like platinum that are used to make the catalyst—the substance that sparks a chemical reaction in a battery.

With a cheaper catalyst, zinc-air batteries become a promising alternative to the lithium-ion batteries that currently power large-scale storage grids.

Though there are other bugs still to be worked out, eliminating the cost factor is one of the biggest hurdles to making zinc-air batteries viable, Labbe said.

To create a less costly catalyst, Labbe is working with manganese and iron. Both elements are plentiful in the Earth’s crust and abundantly available.

Using a layering technique, he’s coating the surface of the battery’s electrode with catalysts containing oxides—chemical compounds from the two metals—and he’s starting to see results.

Building on earlier U of A research that showed manganese oxide could be used as a catalyst, Labbe and his colleagues were the first to discover the chemistry needed so iron oxide could also be used.

Though not quite as effective as platinum, the oxides do work as catalysts, and Labbe continues to refine the process. “The chemistry isn’t quite there yet, so we’ll need to work on it to reduce the energy losses more.”

The oxides are also effective in helping the rechargeable battery maintain its performance, he says.

“So far, we can retain over 90 percent efficiency after 200 recharge cycles, meaning it will have a longer lifetime and avoid having to be replaced. It’s important to have that stability if it’s going to be suitable for widespread use.”

The battery could be ready for mainstream use within 10 to 15 years, Labbe believes.

“If zinc-air batteries are successful as grid-scale energy storage, you could see them used to store renewable energy generated by wind and solar farms, and they could also be used by households to store energy produced by solar panels, rather than selling the energy back to the grid.”

Improving the function of grid-scale storage is key in moving the shift to renewable energy forward, he added.

“Discoveries like this are key to bridging that gap.”

Zinc-air battery with improved performance thanks to solar power

Provided by
University of Alberta

Citation:
Building a better, cheaper battery for power grids (2022, May 5)
retrieved 5 May 2022
from https://techxplore.com/news/2022-05-cheaper-battery-power-grids.html

Denial of responsibility! NewsUpdate is an automatic aggregator around the global media. All the content are available free on Internet. We have just arranged it in one platform for educational purpose only. In each content, the hyperlink to the primary source is specified. All trademarks belong to their rightful owners, all materials to their authors. If you are the owner of the content and do not want us to publish your materials on our website, please contact us by email – [email protected]. The content will be deleted within 24 hours.
batterybest technology newsbuildingcheapergridsnews update technewsupdatePower

CoD: Black Ops Cold War Is Getting Jungle Map On May 6

After Apple’s switch to USB-C on iPhone, AirPods and…

Apple may move to USB-C for AirPods and other accessories…

Our Thomas Cup title triumph all about pure resilience and…