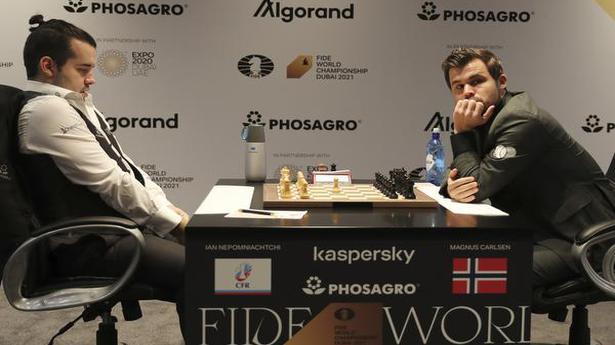 World champion Magnus Carlsen and challenger Ian Nepomniachtchi tested the waters for 45 moves before settling for a draw in the first encounter of the best-of-14-game World chess championship match in Dubai on Friday.

The first game, where Nepo opened with white pieces, ended after a three-fold repetition of moves.

Following the opening lines of Ruy Lopez, Carlsen’s decision to sacrifice a central pawn on the ninth move injected some interest. .

Soon, commentating on the game, five-time world champion Viswanathan Anand said, “White is a pawn up but look at this pawn structure. It is not the easiest pawn structure to use an extra pawn. Black probably has very good compensation.”

The early exchange of queens kept the position in balance. The players did not look surprised by moves pulled off by their rivals.

At times, Carlsen appeared to be in a position to seize control. But Nepo stayed sharp and precise in his choice of continuation. Finally, Nepo returned the extra pawn on the 36th move. Before long, the players repeated the moves and signed peace.

In the post-game press conference, Carlsen said he was not “particularly optimistic in terms of winning the game” but generally happy with the ideas he found over the board. Nepo was magnanimous in acknowledging the “fine game by Magnus.”

The second game, where Carlsen plays white, is scheduled for Saturday.

Denial of responsibility! NewsUpdate is an automatic aggregator around the global media. All the content are available free on Internet. We have just arranged it in one platform for educational purpose only. In each content, the hyperlink to the primary source is specified. All trademarks belong to their rightful owners, all materials to their authors. If you are the owner of the content and do not want us to publish your materials on our website, please contact us by email – [email protected]. The content will be deleted within 24 hours.
best sports newsCarlsenNeponews update sportsnewsupdateopenerpeacesign

“I want to stay champion” – Khamzat…