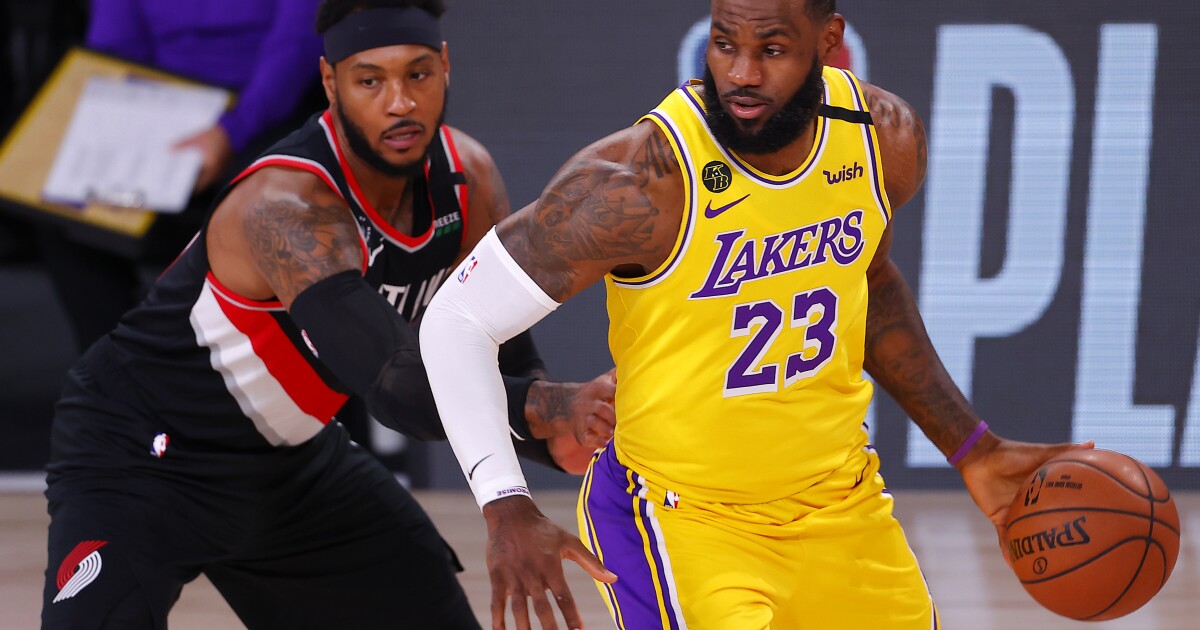 “We don’t care,” Anthony answered before the question was finished.

The storyline is that the Lakers are old by NBA standards or they are a very experienced team, depending on your view.

The truth is that eight of the 12 players on the Lakers’ current roster are 30 or older, six of them joining the team this summer.

Anthony in his first news conference with the Los Angeles media on Monday since joining the Lakers on a veteran minimum deal talked about how players of his generation have taken care of their bodies and that has allowed them to extend their careers.

The saying “age ain’t nothing but a number” is something Anthony embraced.

“I like when people talk about the age. It gives a better story. I think it gives a better story,” Anthony said. “I think people forget, at the end of the day, it’s about basketball. You got to know how to play basketball. You got to have that experience. I think that’s what we bring at this point and time. Our talent, our skill, but also our experience.”

“I think timing is everything. I mean, for years, we’ve always laughed about it and spoke about it — what it would be like,” Anthony said. “We had a little bit of experience with the USA Basketball and playing together, but that’s totally different than a situation like this. But we’ve always talked about it, laughed and joked about it. But I thought and he thought at this moment now, everything comes back full circle for us. And I think the time is now for us to be on the same team. It couldn’t have come at a better time.”

Last season in Portland, he started in just three of the 69 games he played. He averaged 13.4 points and made 40.9% of his three-pointers as a valuable reserve for the Trail Blazers.

He didn’t say what his role will be with the Lakers, but he learned a lot about coming off the bench for the first time in his illustrious career.

“Again, that was my first time doing it and experiencing that at that level. But I enjoyed it. It was fun, it was basketball, and I was still able to do my thing and play ball and have fun and have the love for the game again. So, I don’t know what’s going to happen [with the Lakers], you know what I’m saying? I just know I’m prepared, like I’m ready, you know what I’m saying? I’m ready to go play basketball. I know what’s at stake here and I’m totally locked.”

Anthony said he’s coming to the Lakers “with a championship on my mind.”

He knows it won’t be easy, but he’s prepared to do his part.

“This is the one thing that it keeps me up at night, it motivates me, because I don’t have it,” Anthony said of a title. “I want that experience. I want to experience what it’s like and going through the ups and downs of a championship season with a team, right? The turmoil. How we come together when those things are not going right. That adversity. When adversity hits, how we going to come together even tighter. How we going to have each other’s back. How we are going to support each other. Because the basketball part of it is going to take care of itself.

Denial of responsibility! NewsUpdate is an automatic aggregator around the global media. All the content are available free on Internet. We have just arranged it in one platform for educational purpose only. In each content, the hyperlink to the primary source is specified. All trademarks belong to their rightful owners, all materials to their authors. If you are the owner of the content and do not want us to publish your materials on our website, please contact us by email – [email protected]. The content will be deleted within 24 hours.
Anthonybest sports newsCarmeloLakersnarrativenews update sportsnewsupdateready