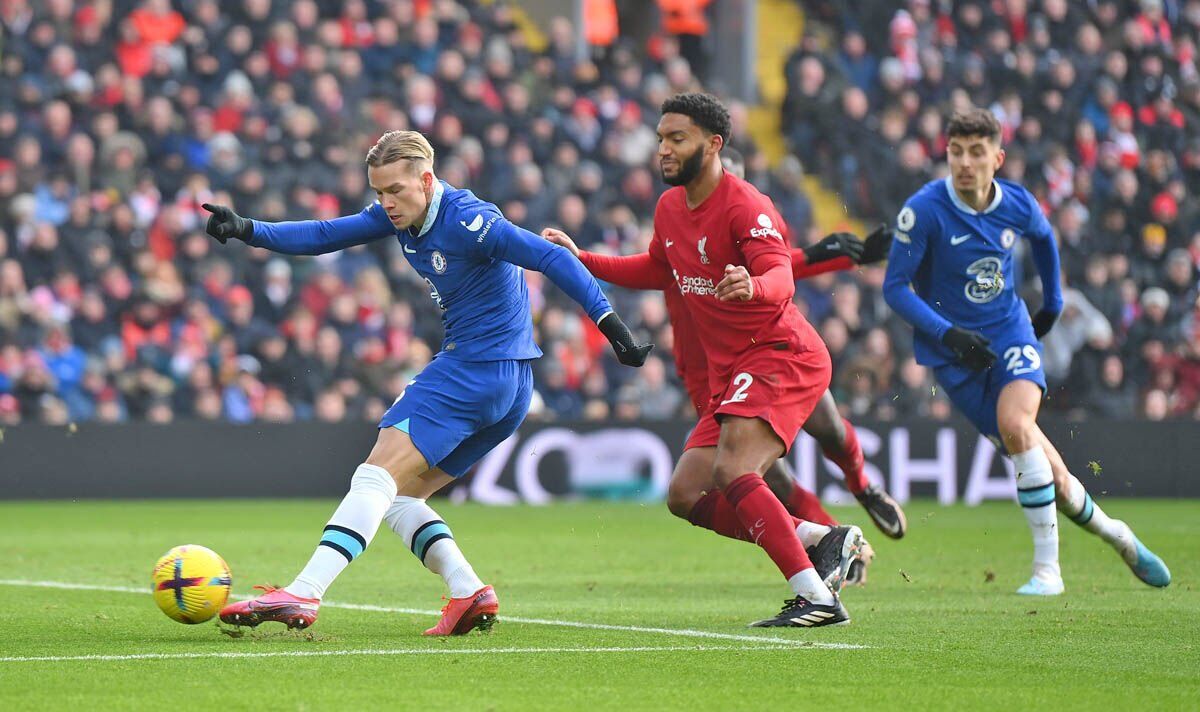 Chelsea managed to hold Liverpool to a goalless draw at Anfield in a major boost for Graham Potter’s side. It wasn’t a classic on Merseyside, with the contest summing up how far both teams have fallen. Express Sport now takes a look at four things we learned from the showdown.

Plenty has been said and written about Chelsea in the wake of their decision to spend big on Mykhaylo Mudryk, who had previously looked set for Arsenal.

But while he’s clearly a diamond in the rough, his cameo at Anfield suggests Potter would be wise to make him a certain starter.

Mudryk wasted no time getting used to life in the Premier League, tackling James Milner before causing the Liverpool star all sorts of problems.

And he came close to opening the scoring, too, only for his effort to hit the side of the net.

Mudryk was also unlucky not to score after that, too. He still has much to learn but the 22-year-old, in one of the toughest grounds in the country, certainly lived up to the hype.

Before the game, Liverpool manager Jurgen Klopp decided to leave Darwin Nunez on the bench.

The former Benfica star hasn’t lived up to expectations since his huge move back in the summer, scoring just 10 goals in the time since.

But, without Nunez – who hasn’t netted since the World Cup in Qatar – Liverpool looked toothless in attack.

Players such as Mohamed Salah and Cody Gakpo looked isolated and while Nunez didn’t impose himself upon coming on, the Reds still looked better with him on the pitch.

Whether Nunez can keep his place in the team for Liverpool’s FA Cup clash with Brighton next weekend remains to be seen.

Potter will be the happier manager

Potter has found life tough at Chelsea ever since being appointed as Thomas Tuchel’s successor back in September.

But the 47-year-old will be happy with the way his side performed at Anfield, even if they were unable to claim all three points.

Chelsea looked far more dangerous than Liverpool and were unlucky not to go ahead when Kai Havertz had an early goal ruled out for offside.

Mudryk was a big plus for the Blues, while Conor Gallagher fared well in the middle of the park.

Potter needed his Chelsea players to show some fight and they did exactly that, with only a goal missing from an entertaining and enterprising display.

Both teams are bad these days

Before the match, fans on social media were calling the game ‘El S***clasico’.

And while that’s perhaps harsh, it’s clear both Chelsea and Liverpool remain shadows of their usual selves these days.

Liverpool looked devoid of energy throughout the game, something that hasn’t been levelled at Jurgen Klopp’s side over the years.

And Chelsea miss the potentancy of old, too.

Both teams look more like Europa League sides rather than Champions League sides, and that’s a damning indictment of where they’re at these days.

Denial of responsibility! NewsUpdate is an automatic aggregator around the global media. All the content are available free on Internet. We have just arranged it in one platform for educational purpose only. In each content, the hyperlink to the primary source is specified. All trademarks belong to their rightful owners, all materials to their authors. If you are the owner of the content and do not want us to publish your materials on our website, please contact us by email – [email protected]. The content will be deleted within 24 hours.
backfiresbest sports newsBosschelseafindsgambleLiverpoolnews update sports