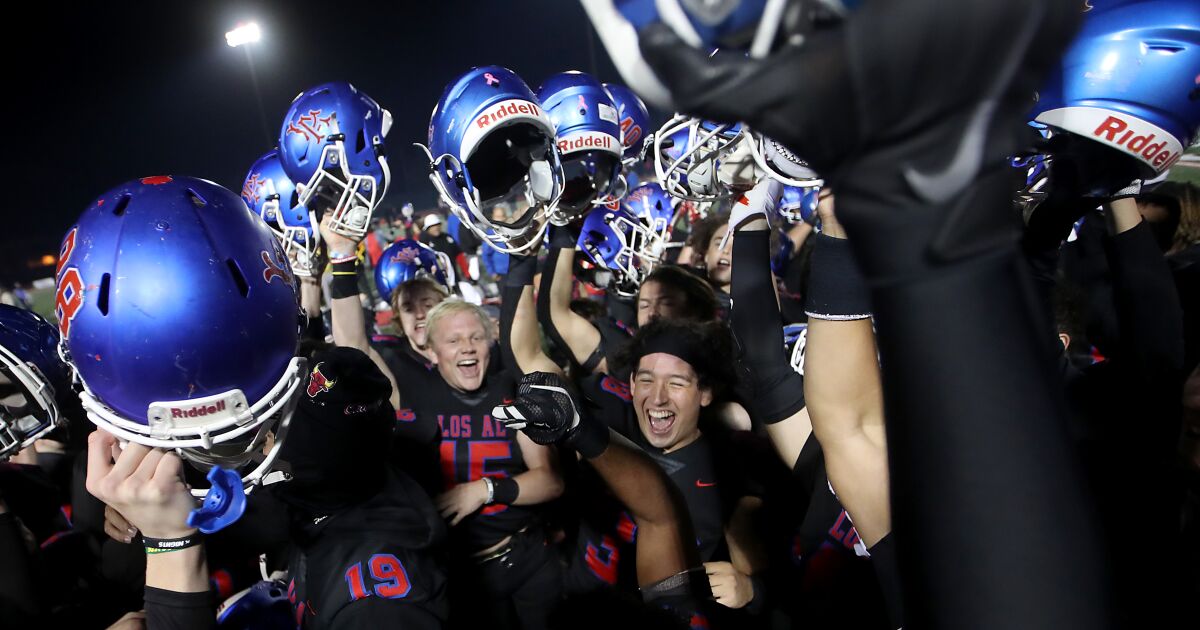 For one glorious Friday night, it was the public school powers seizing the spotlight in the Southern Section Division 1 football playoffs.

Close to 10,000 came to Veterans Stadium to create a festive atmosphere. Who would be deemed the little brother or the big brother in this rivalry? No one seemed to care that the reward for winning would be a matchup against unbeaten Santa Ana Mater Dei in the semifinals. Mater Dei defeated San Juan Capistrano JSerra 54-14.

And why should anyone apologize for enjoying the moment. The field was filled with future college players and perhaps a few future pros, considering Poly has produced more NFL players than any other school in California.

Running back Damian Henderson of Los Alamitos sure looked like he’s ready for another level, rushing for 237 yards and four touchdowns to help Los Alamitos (9-2) pull away in the second half for a 52-42 victory.

The first half featured so much offense that fans hardly had time to go buy a hot dog. Poly came in with five consecutive shutouts but the the Griffins’ combination of Nelson’s passing and Henderson’s running resulted in five consecutive touchdown drives. Poly responded with big plays, including a 75-yard kickoff return by freshman Kamarie Smith and an 81-yard touchdown reception by sophomore Jadyn Robinson, who had two TD catches.

At halftime, Los Alamitos was clinging to a 33-28 lead. The Jackrabbits’ defense came up with two stops in the second quarter, denying Henderson on a fourth-down run and forcing Nelson into a couple of incompletions, resulting in the only punt of the first half.

In the third quarter, Henderson scored on a 45-yard run and sophomore Anthony League added a 44-yard touchdown run in the fourth quarter to give the Griffins breathing room.

There was talent all over Veterans Stadium, and not just seniors. Los Alamitos has an exceptional freshman offensive tackle in 6-foot-2, 300-pound Manoah Faupusa, who has been protecting Nelson’s blindside.

“We have a need to keep No. 7 standing up, and he’s that guy,” coach Ray Fenton said. “It’s extremely uncommon for a freshman to be doing that.”

Then there’s Poly quarterback Darius Curry, a junior who came back from a torn anterior cruciate ligament. He has been the Jackrabbits’ leader and stuck it out in the spring even though Nico Iamaleava from Downey Warren was supposedly taking over at quarterback. Curry stayed to compete, and Iamaleava went back to Warren. The Jackrabbits finished 10-1 under Curry’s steady play. He passed for 400 yards and five touchdowns in the loss.

There was plenty of attention for Friday’s game, with Bally Sports televising it and people focused on Lemon, who has always had great skills playing receiver but also left others uncomfortable with some of his on-field antics. It came to a head earlier this season when the officials ejected him for two 15-yard penalties in a game (it was later rescinded).

A USC assistant coach had a one hour conversation with Lemon.

“Since that game, he has been everything you had hoped for,” Fenton said. “He’s been outstanding.”

Lemon had 15 receptions and made touchdown catches of 10 and 16 yards.

Denial of responsibility! NewsUpdate is an automatic aggregator around the global media. All the content are available free on Internet. We have just arranged it in one platform for educational purpose only. In each content, the hyperlink to the primary source is specified. All trademarks belong to their rightful owners, all materials to their authors. If you are the owner of the content and do not want us to publish your materials on our website, please contact us by email – [email protected]. The content will be deleted within 24 hours.
AlamitosBeachbest sports newsDamianHendersonlongLosnews update sports