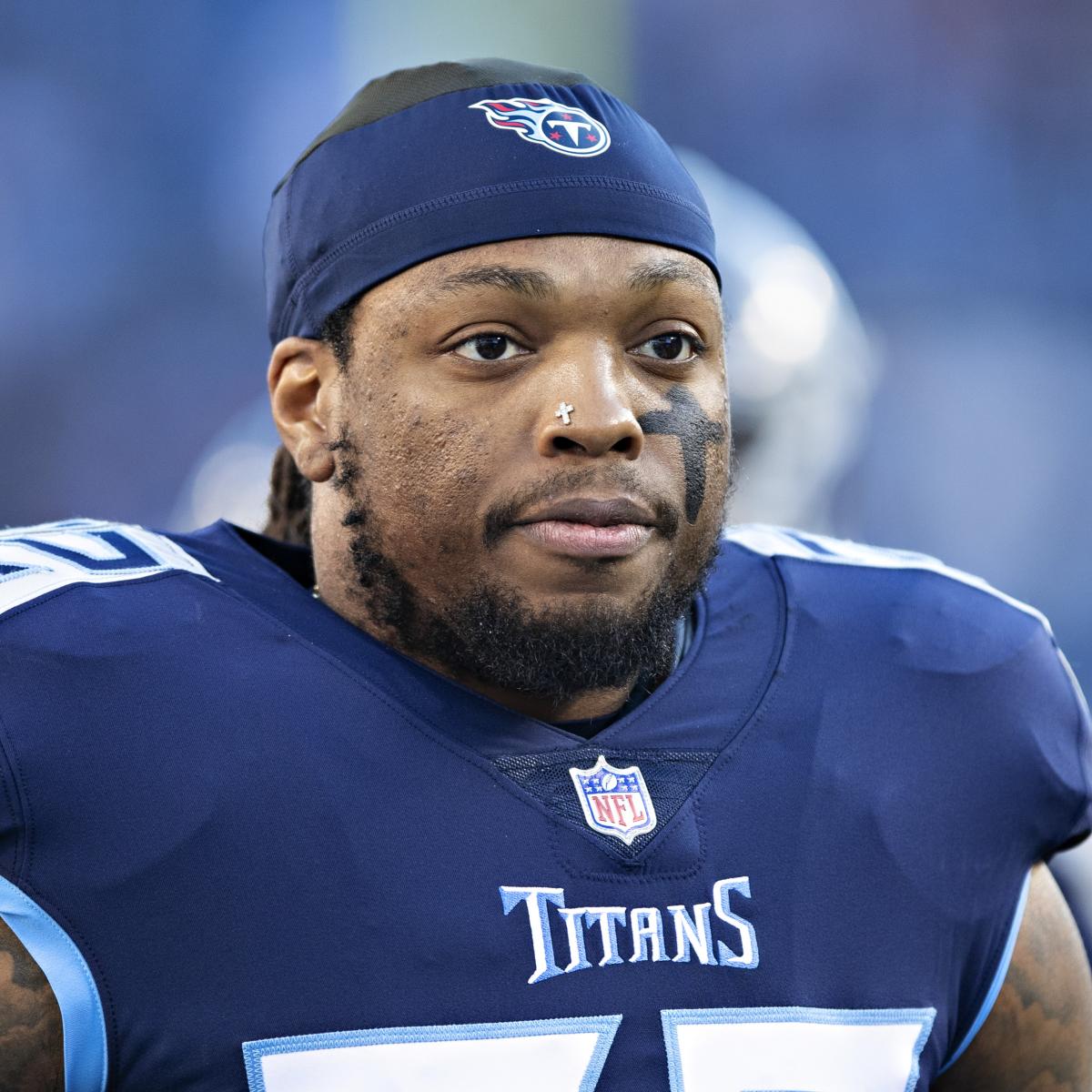 Derrick Henry, Titans Are Destined to Disappoint in 2022

In the NFL, a team’s playoff window can close over the course of an offseason. With a couple of key losses and a star player coming off a serious injury, the Tennessee Titans will disappoint anyone with high expectations for them in 2022.

All five of those AFC teams could make a push for the postseason after failing to clinch a playoff berth in 2021.

What about the Titans?

Most importantly, their star player has to stay healthy. Last season, running back Derrick Henry missed nine games because he fractured his fifth metatarsal and had to undergo surgery. Though the bruising ball-carrier returned for a divisional-round matchup against the Cincinnati Bengals, he recorded 20 rushing attempts for just 62 yards and a touchdown.

While it’s premature for anyone to say Henry will continue to battle injuries, one has to wonder if he’s headed down the same path as Carolina Panthers running back Christian McCaffrey, who had a tremendous workload for consecutive campaigns before his body started to break down in 2020.

Though McCaffrey handled slightly more touches in a two-year span as a dual-threat playmaker on the ground and in the passing game, Henry takes a lot of physical punishment as one of the league’s few workhorse running backs. The latter led the NFL in carries in 2019 and 2020.

Tennessee selected Hassan Haskins in the fourth round of the 2022 draft, but he doesn’t compare to a 6’3″, 247-pound two-time rushing champion. If the rookie cuts into Henry’s touches, the Titans’ run-heavy offense could take another step back.

In a glass-half-full outlook, Henry could bounce back from an injury-riddled campaign, and Haskins may help keep him fresh through a 17-game slate. With that said, both running backs could struggle to find holes between the tackles and on the perimeter of the Titans’ zone run-blocking scheme.

Tennessee released Pro Bowl guard Rodger Saffold. Even though he’ll turn 34 years old in June, the club doesn’t have a clear-cut replacement for him.

“This is a player we feel his best football is in front of him,” Vrabel said. “We’ve been able to evaluate him against some very good opponents. This year he played left guard against the Saints, and we’re hoping he can start there and compete at left guard. But he has versatility as well and has played all across the line.”

The Seahawks selected Jones in the fifth round of the 2018 draft, and he’s only started in seven out of his 36 contests. He’s played every position except center, though the 25-year-old offensive lineman didn’t establish himself at any position. The Ohio State product may win the starting job through training camp, but he needs more experience against starting-caliber players.

Among last year’s starting offensive linemen, the Titans also moved on from David Quessenberry, who signed with the Buffalo Bills. While the 31-year-old had plenty of lapses in pass protection, allowing 11 sacks through 1,184 snaps, per Pro Football Focus, he often sealed the outside lanes for ball-carriers. SI.com’s John Glennon provided some insight.

“Quessenberry’s forte is the zone-blocking run game, which works well for the Titans,” Glennon wrote. “His PFF run-blocking grade last season was 86.5 in 2021, sixth-highest among all NFL tackles.”

Dillon Radunz, a 2021 second-rounder, could succeed Quessenberry at right tackle, but he lost a battle for the position last offseason and played in a reserve role at guard and left tackle.

For the sake of the running game, the Titans need Radunz and perhaps Jones to fill big roles. If not, quarterback Ryan Tannehill may have to shoulder a bigger load for the offense, which isn’t a promising alternative outlook.

In two years under former Titans offensive coordinator Arthur Smith, Tannehill earned his first Pro Bowl nod and won Comeback Player of the Year, throwing for 2,742 yards, 22 touchdowns and six interceptions through 12 contests (10 starts) in 2019. He also threw for a career-high 33 touchdowns and just seven interceptions in 2020.

Last offseason, Smith took the head-coaching job with the Atlanta Falcons, and Tannehill’s passing production dropped significantly under new offensive coordinator Todd Downing. He threw for just 21 touchdowns and 14 interceptions—his most turnovers through the air since his 2013 term with the Miami Dolphins.

Perhaps Tannehill needs an extended adjustment period in Downing’s system, but the Titans play-caller doesn’t have a good track record. In 2017, he served in the same position for the then-Oakland Raiders, overseeing an offense that ranked 23rd in scoring and 17th in yards. Last year, his Titans unit was 15th and 17th for those offensive categories, respectively.

Downing must keep the ground attack on track despite changes along the offensive line and put Tannehill in a position to flourish without his best wide receiver from the previous three years.

The Titans traded A.J. Brown to the Philadelphia Eagles during the first round of the 2022 draft. General manager Jon Robinson said that the team didn’t have a contract offer close to the Pro Bowl wideout’s contract demands.

“The trade thing kind of manifested itself from them, and we really started working on that over the last 18, 20 hours,” Robinson said, per ESPN’s Turron Davenport. “I dealt with [Brown’s agent], went back and forth really over the last two to three weeks and just realized that the gap was really too far for us to bridge.”

After Tennessee sent the Brown to the Eagles, the club selected Treylon Burks with the No. 18 overall pick acquired in the deal. The Arkansas product models his game after versatile wideout Deebo Samuel. But do the Titans have the offensive coordinator to maximize his talent? Most people would trust an accomplished play-caller such as Kyle Shanahan to get the most out of a dynamic playmaker, but Downing hasn’t earned the benefit of the doubt.

Robert Woods, whom the Titans acquired from the Los Angeles Rams, can provide a reliable veteran presence with a 63.5 percent catch rate, but he’s 30 years old and coming off a torn ACL.

Going into the 2022 season, the Titans have uncertainty in various areas of their offense. Will Henry bounce back? Can the offensive line create holes for him? How quickly can Tannehill develop a rapport with two new projected starters at wide receiver and incoming tight end Austin Hooper? Is Downing fit to put all those playmakers together for a viable offensive attack?

In a scoring shootout, Tennessee may need its defense to keep the opponent’s scoring opportunities at a bare minimum, and even that comes with a big question mark.

Cornerback Caleb Farley hasn’t been able to stay healthy, playing 60 defensive snaps through his rookie campaign. Since March of 2021, he’s undergone back surgery and torn his left ACL. If the first-rounder cannot stay on the field, rookie second-rounder Roger McCreary may have to take on a big role on the boundary right away.

The Titans have one too many voids amid noteworthy offensive changes to replicate their strong runs as AFC South champions in each of the last two seasons. You can close the window on their playoff aspirations this year.

Denial of responsibility! NewsUpdate is an automatic aggregator around the global media. All the content are available free on Internet. We have just arranged it in one platform for educational purpose only. In each content, the hyperlink to the primary source is specified. All trademarks belong to their rightful owners, all materials to their authors. If you are the owner of the content and do not want us to publish your materials on our website, please contact us by email – [email protected]. The content will be deleted within 24 hours.
best sports newsDerrickdestineddisappointHenrynews update sportsnewsupdatesports news

Mirabai Chanu and other CWG lifters left out of Asian…

After CWG haul, Sathiyan looks to add more spice to his…

Next up for Serena is Raducanu at Western & Southern…