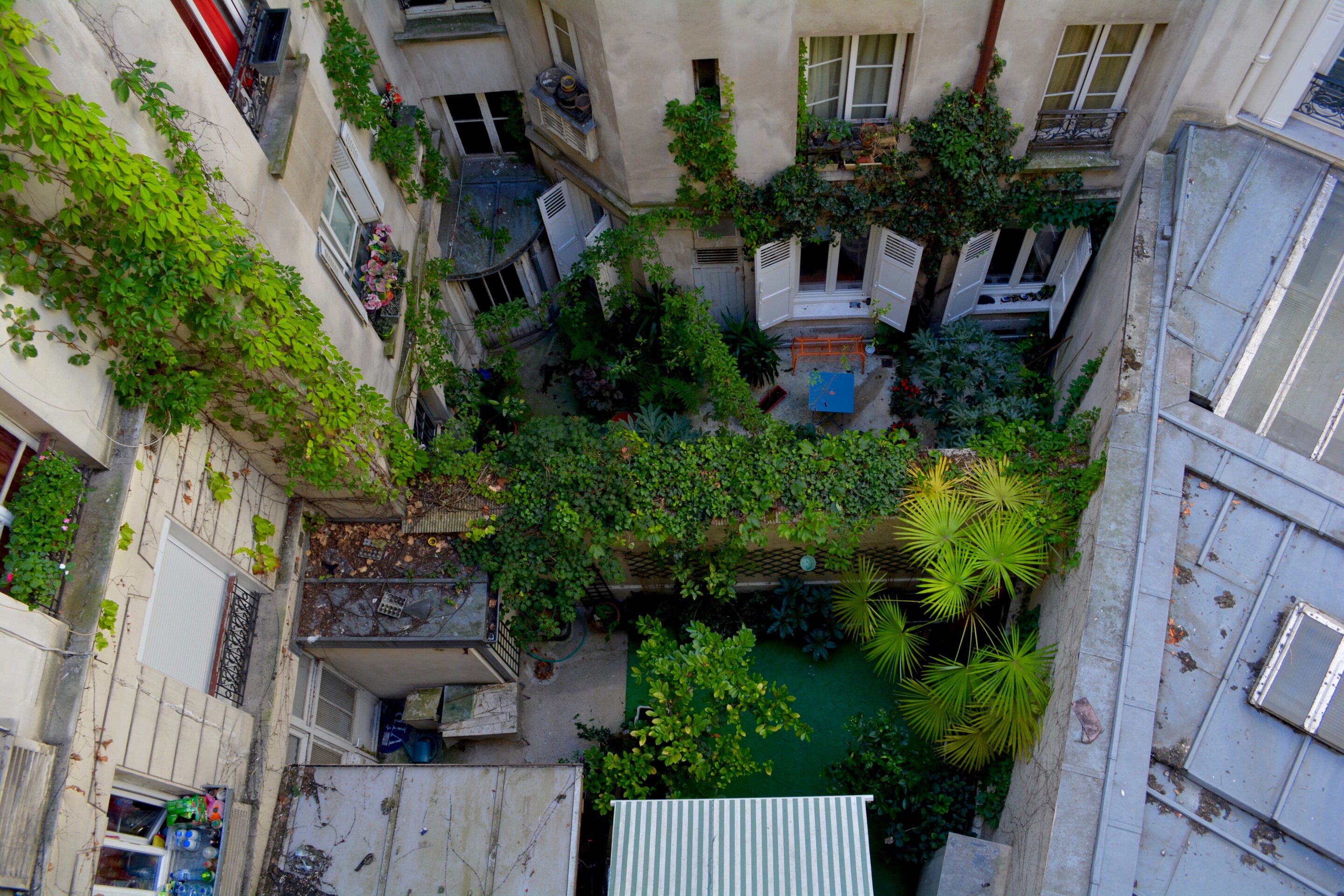 How does this professor’s garden grow? On a Denver rooftop

Colorado State University professor Jennifer Bousselot is growing a garden on top of a building in Denver as part of her ongoing research into “green roofs” and her efforts to educate the public about their many benefits.

But more than that, Bousselot wants to show how cultivating gardens on rooftops—what she calls the most underused space in urban areas—can help restore nature to cities, reduce heat radiated by concrete and feed people.

Add an array of solar panels and Bousselot sees even bigger possibilities. She gave a TEDx talk in 2020 on agrivoltaics, or using a space for both solar generation and energy. She plans to grow plants under solar voltaic panels on the roof of a nearby building.

“That just gets me up and excited every day. As our populations continue to become more urbanized, and by mid-century, when we’ll have at least 9 billion people on this planet, with about two-thirds of them being in cities, we have to start thinking of ways to be more resilient,” Bousselot said.

In Denver, concerns about climate change and loss of green spaces, along with their benefits of lowering temperatures and absorbing water, led to voter approval in 2017 of an initiative requiring developers to incorporate green roofs on new buildings larger than 25,000 square feet and on existing buildings when roofs were repaired or replaced. A task force, however, helped rewrite the measure to give builders more cost-effective alternatives.

Colorado State wasn’t required to install green roofs on its new buildings on the National Western Center grounds in Denver, but Bousselot said the school wanted to honor the spirit of the ordinance. The building with the garden is called Terra, Latin for “earth.” It is part of CSU’s Spur complex. The programs and classes at Terra focus on agriculture.

A second building, named Vida, Spanish for “life,” showcases CSU’s veterinary program, equine sports medicine and connections to human health. The final building, scheduled to open in 2023, is called Hydro, Greek for “water,” and will be the site of Spur’s annual Water in the West Symposium and Bousselot’s agrivoltaics project.

When Bousselot learned of plans for the Spur campus, she knew she wanted a rooftop garden. She is an assistant professor of horticulture at CSU and has been conducting research into green rooftops and native plants for many years.

The garden, which covers about 2,500 square feet, is a series of different plots, ranging from vegetables to medicinal and native plants. Bousselot and CSU students are studying what kinds of soil and irrigation work in a rooftop garden and what yields can be produced.

Bousselot and her students have shared their bounty with members of the public, who can visit the garden. They have contributed a total of almost 290 pounds of tomatoes, cucumbers, peppers, eggplants, basil and herbs to the GrowHaus, a Denver nonprofit organization that offers food-distribution programs and education.

“I’m an Iowa farm girl that was captivated by the idea of being able to farm a rooftop,” Bousselot said. “I’ve spent the last 19 years with almost entirely that vision in mind. To be able to do it is literally a dream come true.”

A majority of Denver voters embraced that vision as well when the green roofs proposal won. The initiative required most larger new buildings and some existing ones to include rooftop gardens and potentially solar panels. Proponents said the requirement, modeled after ones in other cities, would help reduce heat and stormwater runoff.

The city formed a task force that included the initiative’s authors to recraft the requirements to give builders more flexibility in response to complaints about costs and other issues. The revised ordinance gives building owners options, including adding vegetation on the ground, meeting green-building standards and installing renewable energy.

The ordinance took effect in 2018. Most of the roofs covered by the ordinance must be “cool,” meaning light-colored to reflect the sun.

Laura Swartz, a spokeswoman for Denver Community Planning and Development, said a handful of green roofs have been installed since the ordinance was adopted.

“What we’ve seen a lot more is new construction designed to be more energy efficient,” Swartz said. “We see a lot of renewable energy and we see a lot of enrollment in energy programs to decrease energy use over time.”

Bousselot is on a technical advisory committee that provides recommendations to the city. She said it will take a while to green up Denver’s roofs because a roof’s life span can be long.

“A great example exists in Basel, Switzerland. They started doing a lot of their policy work in 1986 and only now are they in the double digits of the percentage of rooftops covered in green,” Bousselot said.

Basel is among cities that have required vegetation on rooftops to increase biodiversity and help reduce the so-called urban heat island effect. Afternoon temperatures in highly developed urban areas can be 15 degrees to 20 degrees warmer than in surrounding, less-developed areas, according to estimates by several federal agencies.

The miles of hard, dark surfaces in cities absorb heat, and less vegetation results in less of the cooling that happens when heat evaporates water in the leaves of plants.

The 2021 report “Urban Heat Islands” by Climate Central, which analyzes and reports on climate science, rated Denver a 5.35 on an index assessing the average intensity of heat in a city. The figure shows that based on such conditions as the amount of vegetation, hard surfaces, population density and the layout of buildings, Denver’s temperature is likely to be on average 5.35 degrees higher than less developed areas outside the city.

Actual temperatures in a city can range widely, depending on vegetation and the shape and height of buildings, which affect airflow.

Climate Central rated New Orleans as the most intense heat island in the U.S. with an index of 8.94; Newark, New Jersey, was second at 7.71; and New York City was third at 7.62.

The goal of giving pollinators more places to go appeared to be paying off on a recent visit to the top of the Terra building. Bees were busily buzzing around several purple anise hyssops. Brian Adams, a graduate student who is conducting research on medicinal plants, said he has seen more birds showing up as they follow the insects.

“Up here you’re starting an ecosystem that you basically destroyed by building the city space,” Adams said. “Essentially, you’ve got a kind of rejuvenated wild system that wasn’t here.”

In another section, graduate student Jack Whalen was checking the plants in what Bousselot calls the salsa garden. “You have all the plants for salsa: tomatoes, jalapenos, cilantro and chives,” she said.

At the other end of the garden is where much of the produce shared with the community is growing. Bousselot said she has an order for an addition to next year’s crop: garlic. Another section is a sown meadow, where Bousselot is trying out different ratios of flowers and grasses.

“We’re just trying to find the perfect scenario of plants to put together to sort of maximize benefits,” Bousselot said.

The soil on the rooftop is 18 inches, which required a roof sturdy enough to handle it. Bousselot said people who want to build green roofs have to consider providing adequate access for maintenance year-round.

Looking out over the city, Bousselot and Adams talked about the benefits for people, wildlife and the environment if green roofs spread across Denver. As more people move to cities, rooftops can provide space to produce food and renewable energy, increasing both food and energy security, Bousselot said.

“It’s also about just making sure we have green space. I’m a scientist first, but I was drawn to plants because I felt this urge to be around chlorophyll all the time,” Bousselot said. “I don’t know that as scientists that we’ve done a good job of quantifying it yet, but we just need more green spaces in our lives.”

Citation:
How does this professor’s garden grow? On a Denver rooftop (2022, September 20)
retrieved 20 September 2022
from https://techxplore.com/news/2022-09-professor-garden-denver-rooftop.html

Denial of responsibility! NewsUpdate is an automatic aggregator around the global media. All the content are available free on Internet. We have just arranged it in one platform for educational purpose only. In each content, the hyperlink to the primary source is specified. All trademarks belong to their rightful owners, all materials to their authors. If you are the owner of the content and do not want us to publish your materials on our website, please contact us by email – [email protected]. The content will be deleted within 24 hours.
best technology newsDenverGardengrownews update technewsupdateProfessorsrooftop