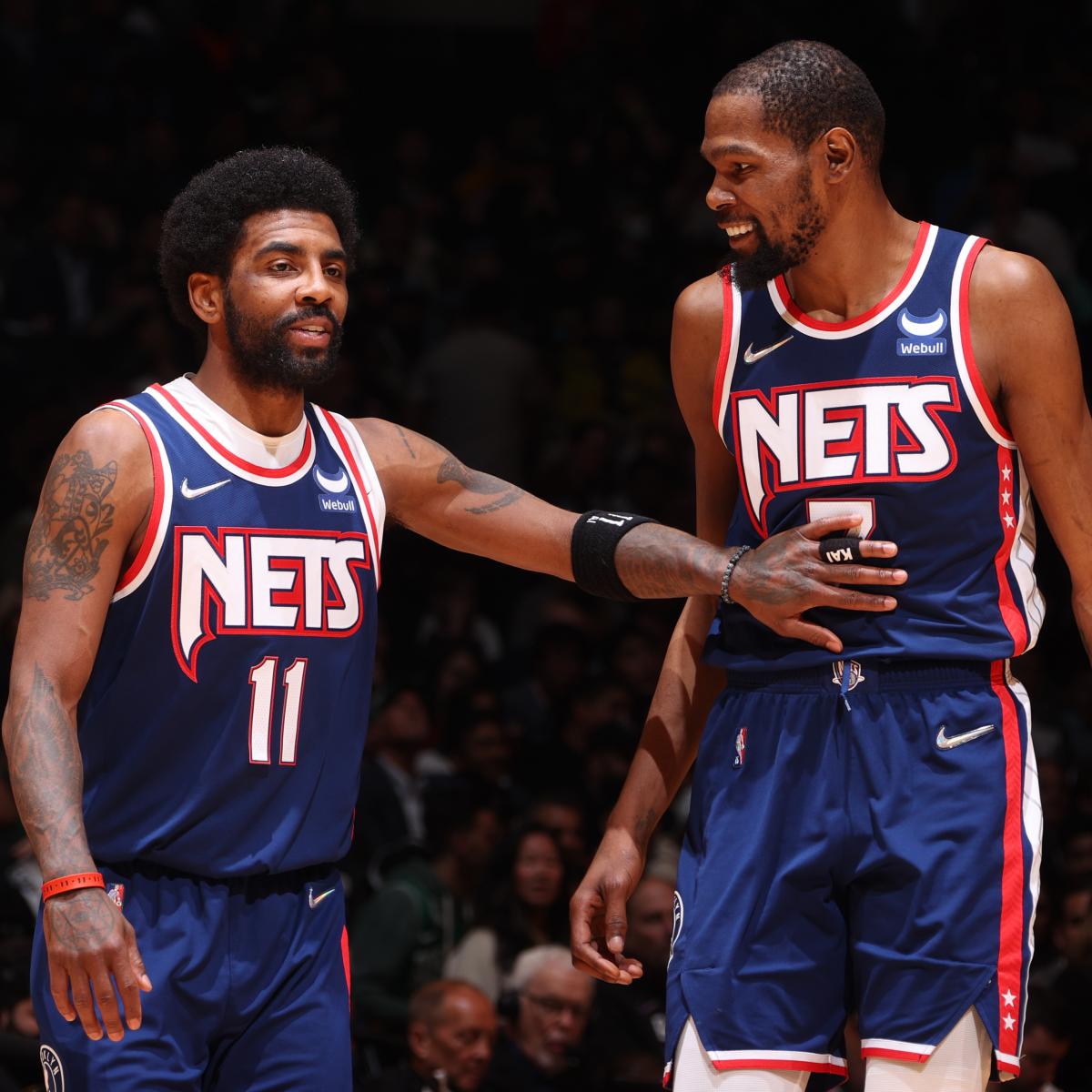 Kyrie Irving and Kevin Durant were a package deal in 2019 free agency. Almost three years later, nothing appears to have changed. The Brooklyn Nets would be wise to remember as much while they contemplate the fate of their superteam run astray.

According to the New York Daily News‘ Kristian Winfield, Irving’s spotty availability and refusal to get the COVID-19 vaccine has left Brooklyn “outright unwilling to give him a long-term extension” ahead of his 2022 free agency (player option). Perhaps this is merely a negotiating ploy. If it’s something more, if the Nets are actually ready to close their Kyrie Irving chapter, they might as well prepare for the end of the Kevin Durant era, too.

This is not an all-or-nothing proposition in the most literal sense. Durant, unlike Irving, already signed an extension with Brooklyn. He is under contract through the 2025-26 season, without any early outs. The Nets can absolutely move on from Irving and keep him.

Select superstars have the cachet to force a franchise’s hand no matter how much time is left on their deal. Durant is among that exclusive clique. Building around disgruntled top-seven players is untenable. If he wants out, Brooklyn doesn’t just have to listen. It’s all but obligated to acquiesce.

Showing Kyrie the door or facilitating his exit elsewhere opens up the Nets to this exact nightmare scenario, in which they’ll have lost three superstars in the same year. They already folded the James Harden experiment. If Kyrie is next to go, Durant likely will not be far behind.

Remember: KD isn’t in Brooklyn to play for the Nets or to maximize his chances at a third NBA championship. He is in Brooklyn, first and foremost, to play with Kyrie:

It’s common knowledge that Durant is committed to playing with Kyrie Irving. Letting him walk would only open the door for KD to demand out.

Marks is playing with fire if he can’t find a middle ground with Kyrie.

The Nets will be spared from taking the everything-or-nothing view if KD is on board with ditching Kyrie or at least not married to the idea of playing with him. And who knows, maybe he’s at that point. Kyrie hasn’t exactly made things easy on him, after all.

This era of Nets basketball has devolved from championship inevitability to a slew of what-ifs and could-have-beens largely centered on Kyrie. What if he doesn’t get injured during their 2021 playoff run? Do they still get bounced by the Milwaukee Bucks in the second round?

More critically, what if Kyrie doesn’t resist getting the COVID-19 vaccine this past season? Is Harden still in Brooklyn, fully vested and everything? Does KD still need to ferry an unfathomably heavy, perhaps unsafe workload, both before and after his left MCL injury? Is Kyrie more equipped to log substantial minutes in the playoffs if he doesn’t miss most of the season and then initially return in a part-time capacity?

Are the Nets still ousted in the first round? Or do they make a deeper postseason push? Are they maybe still playing right now, in the conference finals, rather than deliberating the future of a star who undermined not just a single season but potentially the organization’s entire title window?

The sheer breadth of missed opportunities could be enough for Durant to reconsider tethering what’s left of his prime to Kyrie, especially if he cares only about the basketball of it all.

Kyrie fans be blind to the antics, but it seems his top partner and his current team are both tired of it. Incredible talent, but has been one of the flakiest players of my lifetime. Post-Cavs, there’s always been something. What do you think he does if Nets don’t offer big deal?

“I understand how confusing the constant conversation is,” KD’s manager, Rich Kleiman, said during a recent appearance on Hot 97 (h/t Nets Kingdom). “In reality, they lost, so they gotta look at their team. We all know that Kyrie is an elite, skilled basketball player. Honestly, at the end of the day, we’re trying to win a championship. When the dust settles, it focuses on basketball.”

Kleiman’s sentiments could lend a certain hope, even if indirectly, that the Nets and KD can find a middle ground independent of Kyrie. But they don’t.

Brooklyn’s front office apparently hasn’t spoken with KD since the team’s first-round sweep at the hands of Boston, per Winfield. Flags don’t come in any deeper shades of red.

Maybe you refuse to buy that general manager Sean Marks and company haven’t spoken in weeks to their franchise lifeline and, frankly, co-architect. However, the notion Durant would become disenchanted with the Nets if they divorced the person most responsible for his being in Brooklyn is hardly farfetched. Common-sense enthusiasts might even call it likely.

The Nets can incentivize KD to stay without Kyrie by reopening their title window. Good luck with that.

Letting Kyrie walk in free agency would barely make a dent in Brooklyn’s flexibility. Wiping his salary from the ledger opens up the bigger mid-level exception but not the cap space to even begin replacing him.

Anyone hoping the Nets can make out like bandits in prospective sign-and-trade scenarios shouldn’t hold their breath. This year’s cash-starved market is less than ideal for stars looking to window shop, but Kyrie is not without leverage.

He could sign a four-year max with a cap-space team like San Antonio or Orlando and worry about orchestrating his exit later. Outside parties won’t mind being used as pawns if they can grab assets for him they wouldn’t otherwise land.

That is a nuclear measure, but Kyrie has gone more nuclear in the past. (See: Requesting a trade from Cleveland after three straight Finals appearances and one championship.) And he doesn’t need to actually go through with it. He just needs to box the Nets into a corner to send him where he wants, most likely in exchange for a small- or medium-sized pittance that leaves the organization’s on-court product appreciably worse for wear.

Will Durant really be enamored by the opportunity to soldier on with Ben Simmons (who is coming off back surgery and won’t have played basketball in over a year), Seth Curry, Joe Harris, Cam Thomas and spare parts from a prospective Kyrie sign-and-trade? Even if the Nets retrain Bruce Brown and Nic Claxton and knock the rest of free agency out of the park, that core doesn’t adequately stack up with Boston, Miami or Milwaukee.

Brooklyn without Kyrie tops out as a faux contender. And that’s assuming near-perfect availability from Durant himself, which is far from a given. He has missed a combined 136 games over the past three seasons and turns 34 in September. Headlining a solo-star operation is unsustainable and unappealing for him. Why should the Nets and Durant himself perpetuate a situation eons away from the NBA Finals? It’s a waste of time, for everyone involved.

This begs the question: In the event the Nets are open to writing off Kyrie as a sunk cost, are they also willing to do the same with Durant? Because they better be. A KD trade request (or demand) feels like the most likely, if not only, fallout from a Kyrie Irving exit.

And what then? It’s hard to imagine what a KD trade even looks like because the very concept has until now been unfathomable.

There is no way, though, that the Nets can recoup enough assets to warrant a full-tilt rebuild.

KD will have a say in where he goes because that’s how this works. Nobody is acquiring a soon-to-be 34-year-old owed $194.2 million over the next four seasons without receiving his stamp of approval. And the teams that will reasonably resonate with him won’t be ones drowning in A-plus trade chips or positioned to send back mega-early lottery picks in the summers to come.

Boston (Jaylen Brown) and Phoenix (ultra-complicated Deandre Ayton sign-and-trade) are probably the contenders best suited to win over KD and send Brooklyn a building-block centerpiece. (Ironically, thanks to Jonathan Kuminga, so is Golden State.) But even their most aggressive offers do little to reload the Nets’ neither hopelessly empty nor enviably stocked asset chest.

This all says nothing of what a rebuild—or a more kindly termed “impromptu overhaul”—does to Brooklyn’s own draft obligations. The Houston Rockets control the Nets’ next five first-rounders after this year, with outright ownership in 2024 and 2026 and swaps in 2023, 2025 and 2027. Pivoting away from Kyrie and KD exponentially increases the likelihood Brooklyn forks over top-shelf selections.

That risk alone should be terrifying enough for the Nets to cave and extend Kyrie. Their current hardball stance is oddly timed anyway.

I still think both Kevin Durant and Kyrie Irving will be Nets next year and for seasons to come.

The extension discussions will be interesting, though. Is Kyrie willing to take a deal where part of his salary is correlated to games played?

Now is not the time for the Nets to grow a backbone. The culture-by-committee that was is no more. Superstars are their new culture, for better or worse. It isn’t right, nor is it wrong. It’s the decision they made years ago, then again and again since, and deviating from it now by allowing or encouraging Kyrie to leave isn’t noble.

It’s a reversal that will set them back years—and cost them Kevin Durant.

Dan Favale covers the NBA for Bleacher Report. Follow him on Twitter (@danfavale), and listen to his Hardwood Knocks podcast, co-hosted by NBA Math’s Adam Fromal.

Denial of responsibility! NewsUpdate is an automatic aggregator around the global media. All the content are available free on Internet. We have just arranged it in one platform for educational purpose only. In each content, the hyperlink to the primary source is specified. All trademarks belong to their rightful owners, all materials to their authors. If you are the owner of the content and do not want us to publish your materials on our website, please contact us by email – [email protected]. The content will be deleted within 24 hours.
best sports newsBrooklyndontDurantextendIrvingKevinKyrie

The ‘Form’ Element Created the Modern Web. Was It a Big Mistake?