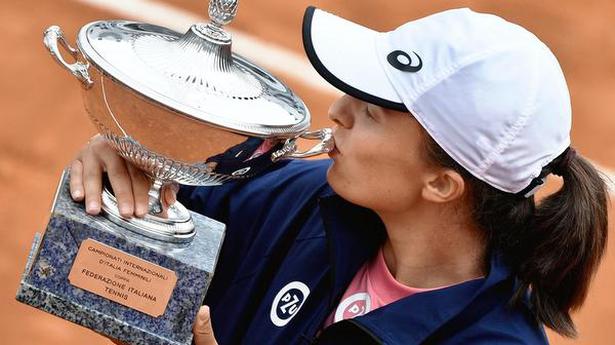 Swiatek, ranked 15, claimed her third WTA title having followed her Roland Garros success with a win in Adelaide in January.

“I’m really, really happy,” said an emotional Swiatek. “I’m overwhelmed, at the beginning of this tournament I would not have dreamed of winning it.”

Pliskova tried to fight back in the third game of the second set, holding a double break to go 2-1, but the Polish player ruthlessly snuffed out any return.

“I will just quickly forget about today,” said Pliskova, the World No. 9, who was playing in her third consecutive Rome final. The former World No. 1 retired injured in last year’s final to Romania’s Simona Halep.

“I’ve had some great matches here, in the past I did well.”

Meanwhile on Saturday, defending champion and World No. 1 Novak Djokovic battled past Italian Lorenzo Sonego 6-3, 6-7(5), 6-2 to set up a clash with nine-time winner Rafael Nadal for the sixth time in the Italian Open final.

Djokovic had two match points in the 12th game of the second set of his semifinal before Sonego forced a third set to the delight of the home crowd in the Foro Italico.

The Serb saved three break points in the first game of the third set, coming back from 0-40 before powering towards his 11th Rome final.

“I think I bounced back very well after the second set and 0-40, maybe if he started with a break up in the third it would be different,” said Djokovic.

“I’ve only myself to blame for not closing the match in the second set, I could have and should have.”

Denial of responsibility! NewsUpdate is an automatic aggregator around the global media. All the content are available free on Internet. We have just arranged it in one platform for educational purpose only. In each content, the hyperlink to the primary source is specified. All trademarks belong to their rightful owners, all materials to their authors. If you are the owner of the content and do not want us to publish your materials on our website, please contact us by email – [email protected]. The content will be deleted within 24 hours.
bagelsbest sports newsdoubleIga SwiatekItalianitalian openKarolina Pliskovalive tennis scores

BCCI likely to host remainder of IPL 2021 matches in UAE in September-October: Report

ZEAL Receives Licence to Broker Lotteries in Germany Until…