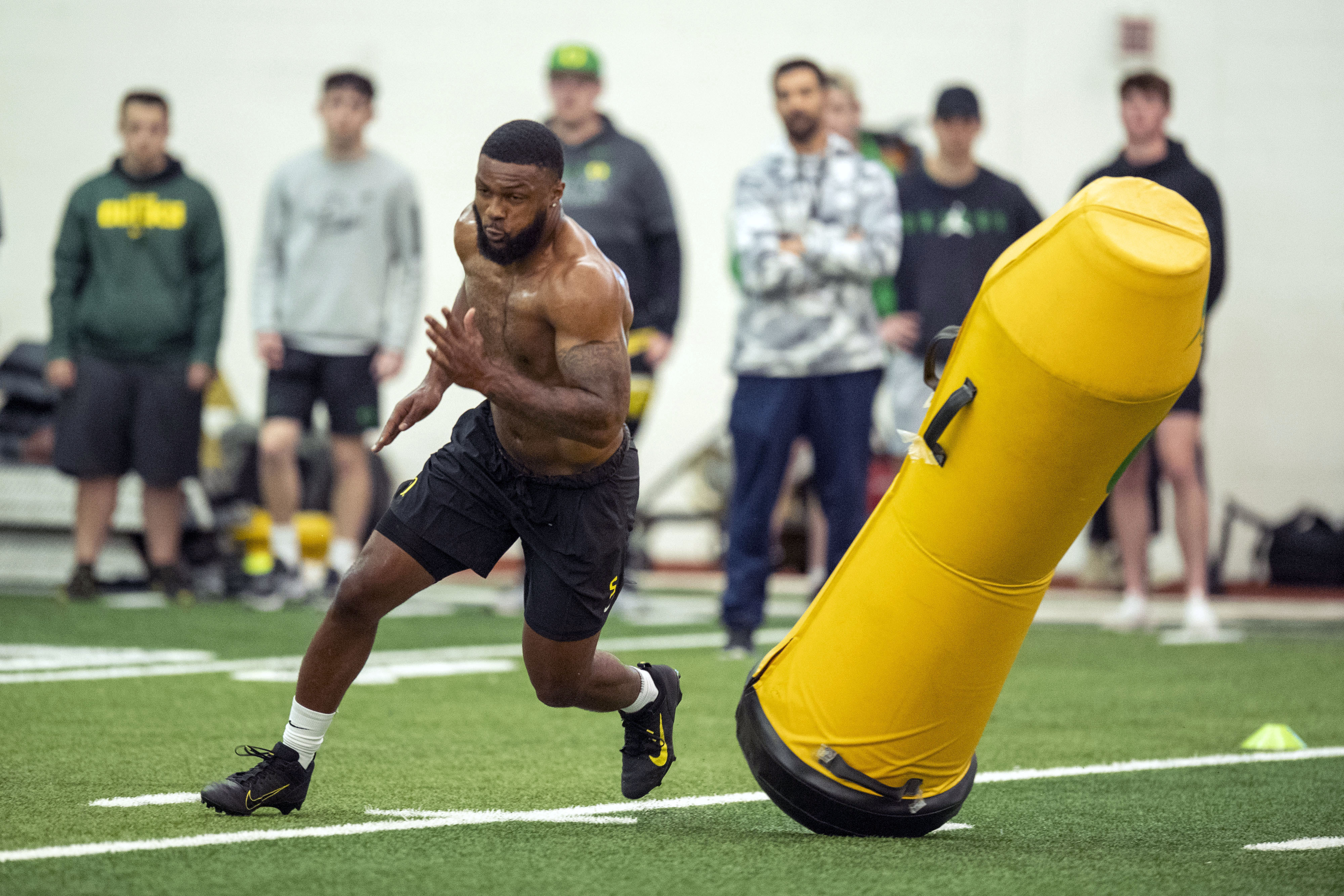 While Oregon defensive end Kayvon Thibodeaux was once believed to be the top prospect in the 2022 NFL draft class, he has slipped down most analysts’ draft boards.

However, that didn’t stop him from putting together a solid performance at Oregon’s pro day on Friday, with drills including bench press, vertical jump, broad jump, 40-yard dash, pro shuttle and three-cone drill. Players also competed in individual position drills.

All 32 NFL teams sent scouts to Oregon’s pro day. However, the Detroit Lions were the most heavily represented with seven scouts, including general manager Brad Holmes, on hand to observe Thibodeaux and his teammates.

When it came time to meet with the media after workouts, Thibodeaux was asked what the most ridiculous thing he had heard during the predraft process. His response?

“That I’m not the best player in this draft,” he said. There are multiple talented edge-rushers in this year’s class, including Michigan’s Aidan Hutchinson, who is currently viewed as the best of them all.

Thibodeaux also recapped his pro day as a whole while speaking with NFL Network’s Michael Yam.

“I mean it was great. It was kind of weird because it was like 200 people just watching me working out. But, I think it went great,” Thibodeaux said. “I was able to really display my linebacker drills, my pass rush, my hands, my feet, you know, everything that I’ve been working on leading up to it.”

Thibodeaux also competed at the NFL Scouting Combine, recording a 4.58 40-yard dash and 27 reps on the bench press. However, he withdrew early from the event, reportedly because of “how long the day was,” per NFL Network (h/t mlive.com).

The 21-year-old entered the NFL draft after an impressive career at Oregon. During the 2021 campaign, he recorded seven sacks, two forced fumbles, 49 tackles and 12 tackles for a loss in 10 games.

Even if Thibodeaux isn’t selected first overall, he’ll likely be taken in the top 10. If he’s taken anywhere after fifth overall, one team is going to be getting a steal.

Denial of responsibility! NewsUpdate is an automatic aggregator around the global media. All the content are available free on Internet. We have just arranged it in one platform for educational purpose only. In each content, the hyperlink to the primary source is specified. All trademarks belong to their rightful owners, all materials to their authors. If you are the owner of the content and do not want us to publish your materials on our website, please contact us by email – [email protected]. The content will be deleted within 24 hours.
best sports newsDayImpressiveKayvonnews update sportsnewsupdateperformancePro

South Carolina gets back in the championship game with a dominant win over Louisville.