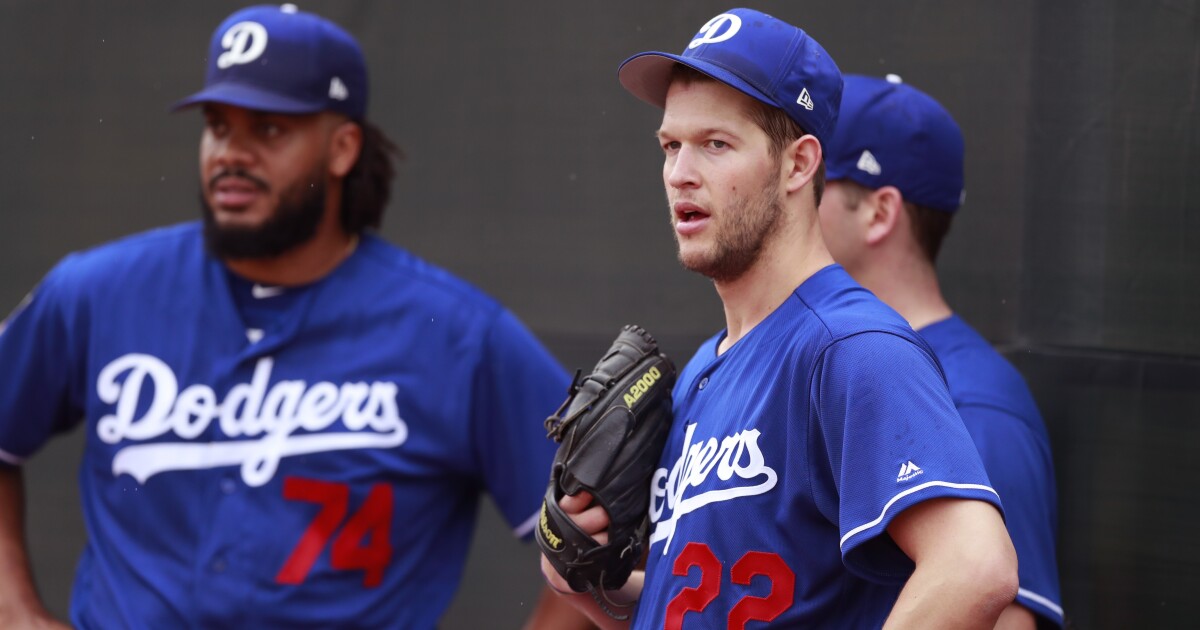 The two pitchers went to dinner together two weekends ago in Arizona, where they were wrapping up what likely would be their final regular-season trip as teammates. They reminisced about a friendship that began 15 years earlier across the country at the lowest rung of minor league baseball, in another galaxy from the stardom that awaited them in Los Angeles. Time flew.

“I love Clayton, man,” Kenley Jansen said. “We talked a little bit about it, how awesome it is to play with each other, how grateful we are.”

It began in Florida in 2006. Clayton Kershaw was a first-round pick from Dallas. Jansen was a catcher from Curaçao. It was Jansen behind the plate when Kershaw made his professional debut in the Gulf Coast League. Four years later, after moving from behind the plate to the mound, Jansen earned his first major league save in his second career appearance in a 1-0 win that Kershaw started.

The duo connected for dozens of wins over the next 11 years, from April into October, as the Dodgers emerged from the penny-pinching McCourt years to become high-spending perennial contenders. Autumn failure stained the first seven postseason trips through their 20s, often with one of them in the middle of the disappointment. Last season, as the two confronted life after their primes and passed the torch to younger peers, October finally went their way.

This October is probably their last together.

“You don’t have time to say goodbye because we’re going to be in the playoffs, which is a great thing,” Kershaw said. “But I think everybody kind of understands the situation next year.”

Kershaw and Jansen are free agents this offseason, and they’re not the only high-profile ones on the Dodgers’ roster. Shortstop Corey Seager, the reigning National League Championship Series and World Series most valuable player, will test the market. So will Chris Taylor, Max Scherzer and Joe Kelly.

Almost every club experiences roster turnover each season. The Dodgers underwent some last winter when Joc Pederson and Kiké Hernández signed elsewhere. Whatever happens this winter, they will return in spring training as one of the best teams in the majors. The show will continue.

But clubs usually don’t have two franchise pillars, two characters returning summer after summer to entertain and thrill the masses until they become civic fixtures, facing the uncertainty at the same time.

“We definitely have some guys that are going to be free agents at the end of this year that have been a huge part of what we have accomplished looking back,” Dodgers president of baseball operations Andrew Friedman said. “And my hope is that it’s not the end of the road with a good number of them. But those conversations will get picked up after we, hopefully, get off the parade.”

Kershaw’s future was further muddled when the future Hall of Famer exited his start Friday with a left elbow injury. The three-time Cy Young Award winner was placed on the injured list Monday and isn’t expected to pitch in the playoffs.

So, for the first time since 2006, back when the two hurlers were teenagers finding their footing in Florida, the Dodgers will play in the postseason without Kershaw when they host the St. Louis Cardinals in the wild-card game Wednesday at Dodger Stadium.

Kershaw’s next step is a mystery. Does he re-sign with the Dodgers? Does he sign with another team? Does he retire? He’s had chances to quash speculation by saying he’d like to return to Los Angeles next year, but he’s danced around the inquiries.

“We got a lot of guys making a lot of money on this team,” Kershaw said Thursday, the night before his final start against the Milwaukee Brewers. “There’s going to be a lot of guys that are going to get whatever they get in free agency and it’s just the nature of the beast. You can’t keep everybody.”

Jansen’s situation is clearer. The Dodgers’ all-time saves leader said he wants to pitch next year — and until he’s 40 — but he almost certainly will not return to the Dodgers once his five-year, $80-million contract expires.

“I’m proud of wearing this uniform,” Jansen said last week. “I can say one thing: Next year, if I’m not around, I’m forever a Dodger. Like Tommy Lasorda said, ‘Once you’re a Dodger, you’re always a Dodger.’ You’ll forever bleed blue. Wherever you go.”

Jansen rebounded this year from three relatively subpar years by embracing changes forced upon him to remain effective. Gone are the days of cutter, cutter, cutter, when hitters knew it was coming and still couldn’t catch up. He now confidently complements the signature pitch with a two-seam fastball and a slider bordering on a slurve.

It’s the latest step in an evolution that spawned in 2009 against his will. Jansen didn’t want to convert from playing catcher to pitcher. He was 21 and fresh off an impressive showing behind the plate at the World Baseball Classic for the Netherlands.

But the Dodgers thought Jansen wouldn’t hit enough to become a starting big-league catcher and they envisioned using his arm strength on the mound. When De Jon Watson, then the Dodgers’ farm director, told him the organization planned on switching him to pitcher, Jansen said he would rather return to Curaçao.

“He had tears in his eyes,” Watson said. “But he trusted us and stayed.”

Jansen’s pitching career began that summer with a scoreless inning in Lake Elsinore. The day before, on July 29, Kershaw, already an established member of the Dodgers’ bullpen, blanked the Cardinals over eight innings in St. Louis in his 42nd career start.

It took less than a year for the two pitchers to reunite at Dodger Stadium with the New York Mets in town. They grew together over the next decade, becoming the greatest bookend combination in franchise history.

“Kenley and I,” Kershaw said, “have been here together for a long time.”

A kid from Dallas and a kid from Curaçao starring in Los Angeles, hoping for nothing more than a parade through the city at the end of the month before life goes on.

Denial of responsibility! NewsUpdate is an automatic aggregator around the global media. All the content are available free on Internet. We have just arranged it in one platform for educational purpose only. In each content, the hyperlink to the primary source is specified. All trademarks belong to their rightful owners, all materials to their authors. If you are the owner of the content and do not want us to publish your materials on our website, please contact us by email – [email protected]. The content will be deleted within 24 hours.
best sports newsClaytonfutureheadedJansenKenleyKershawLongtime