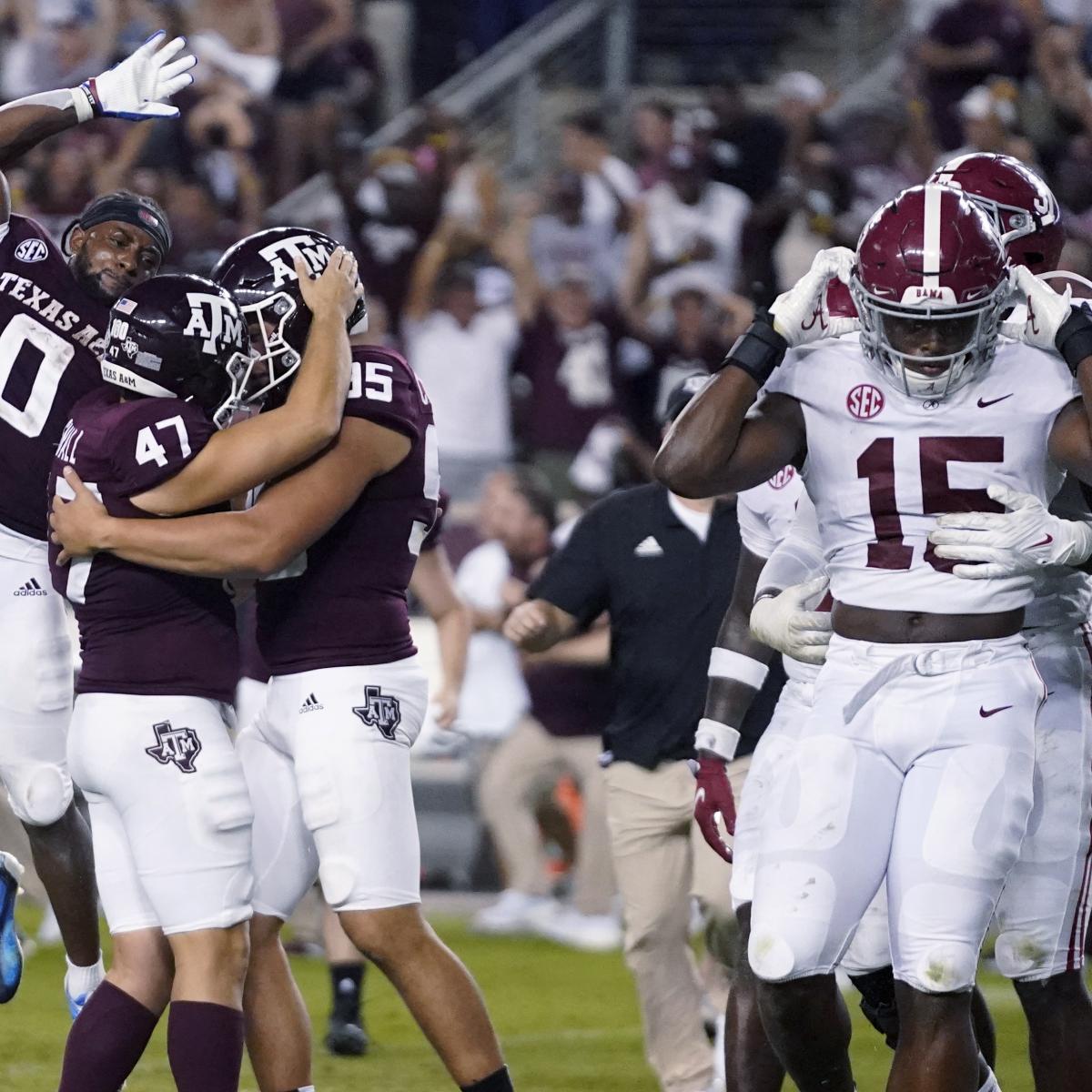 There will be a new No. 1 team in the AP Top 25 poll for Week 7, and it’s highly probable that spot will belong to Georgia. Likely to move up from No. 2, the Bulldogs can thank one of their SEC rivals for this opportunity.

Texas A&M, which fell out of the poll after Week 5, knocked off top-ranked Alabama on Saturday night, rallying for a 41-38 victory at Kyle Field. It was the Crimson Tide’s first loss since their 2019 regular-season finale, and they are likely to drop at least a few spots down the rankings.

Georgia should move up to No. 1 after it notched another impressive win Saturday, cruising to a 34-10 road victory over No. 18 Auburn to improve to 6-0.

Meanwhile, the Aggies helped themselves out too, as they should re-enter the AP poll. They may even be one of the biggest movers considering they knocked off the No. 1 team in the country.

Here’s a look at several teams that impressed Saturday and should be on the rise in the latest rankings.

Things weren’t looking good for Oklahoma early in Saturday’s Red River Showdown against Texas. The Sooners trailed by 21 points by the end of the first quarter, and they benched redshirt sophomore quarterback Spencer Rattler before halftime. But anything can happen when these Big 12 rivals face off.

Oklahoma scored 25 points in the fourth quarter, and Kennedy Brooks’ 33-yard touchdown run with three seconds remaining lifted the No. 6-ranked Sooners to a 55-48 win over the No. 21 Longhorns at the Cotton Bowl in Dallas. It was an incredible comeback fueled by true freshman quarterback Caleb Williams, who passed for 212 yards and two touchdowns and scored a 66-yard rushing TD.

It was also Oklahoma’s first win over a ranked opponent this year, which should help it move up a few spots. No. 1 Alabama and No. 4 Penn State both lost, and while neither is likely to fall too far, the Sooners could jump both. There’s also an argument to be made for Oklahoma to move ahead of Cincinnati, which is ranked No. 5.

Don’t be surprised if the Sooners end up at No. 3 behind only Georgia and Iowa now that they have solidified themselves as the top team in the Big 12.

Over the previous eight seasons, Kentucky turned into a more respectable program under head coach Mark Stoops. But it’s clear that the Wildcats have reached another level, one that deserves national recognition because of their impressive start to 2021.

On Saturday, Kentucky improved to 6-0 with a 42-21 home victory over LSU. And while the Tigers aren’t as strong as they were two years ago, when they went undefeated and won the national title, it was still an impressive victory for the Wildcats that demonstrated their continued growth.

Kentucky moved up to No. 16 in the most recent poll, and it should keep climbing this time around. No. 10 BYU and No. 13 Arkansas both lost, and it’s also possible the Wildcats could move above Coastal Carolina, which is No. 15.

It’s going to be tough for Kentucky to keep moving up, though, considering it goes on the road to face Georgia on Saturday. But that could end up being the Wildcats’ only loss of the season, which should keep them ranked near the top if that happens to be the case.

Texas A&M won’t be ranked too high in Week 7 because voters won’t forget that this team lost consecutive games to Arkansas and the unranked Mississippi State the previous two weeks. But the Aggies deserve to get back into the Top 25 as a reward for defeating the best team in the nation.

Many expected Texas A&M to be among the top teams in the SEC this year after it finished 9-1 in 2020. Some even believed the Aggies could be a threat to knock off the Crimson Tide, but it seemed much less likely when they entered this matchup on a losing streak.

Near the bottom of the AP poll, No. 18 Auburn and No. 21 Texas both lost, while No. 24 SMU only beat unranked Navy by seven points. The Aggies could move ahead of those teams and jump a few others considering the strength of their Week 6 win.

Expect to see Texas A&M end up somewhere around Nos. 20-24 in the Week 7 poll, with the opportunity to keep climbing should they ride this momentum to success in future games.

Denial of responsibility! NewsUpdate is an automatic aggregator around the global media. All the content are available free on Internet. We have just arranged it in one platform for educational purpose only. In each content, the hyperlink to the primary source is specified. All trademarks belong to their rightful owners, all materials to their authors. If you are the owner of the content and do not want us to publish your materials on our website, please contact us by email – [email protected]. The content will be deleted within 24 hours.
best sports newsFootballMoversNCAAnews update sportsnewsupdatepredictingrankings

Dodgers Turn Around Their Mood With Blowout Win Over Giants

If COVID-19 scare in T20 WC: ICC’s committee will deal with it, not members, says interim CEO Allardice | Cricket News – Times of India