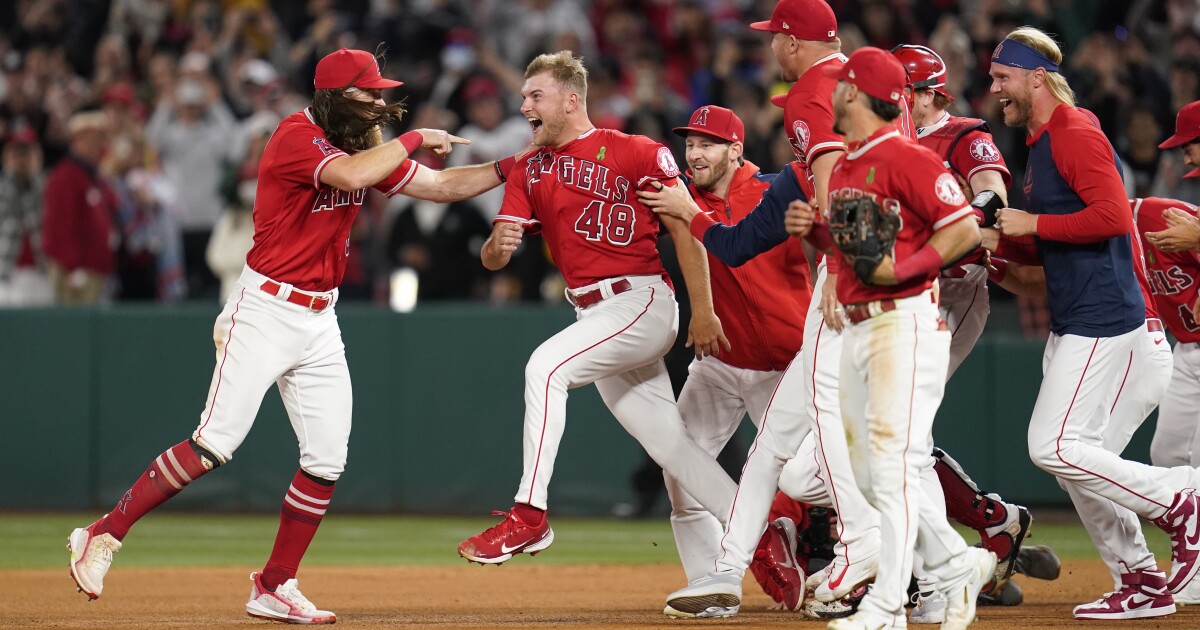 On Baseball: Reid Detmers’ no-hitter is more than an outlier. The Angels can pitch!

They are four words, the words that have stood between the Angels and respectability for close to a decade.

They are four words, the words that American League opponents have feared would come to life one of these years.

They are four words, the words that finally and delightfully might be followed by an exclamation point instead of a question mark.

The Angels can pitch?

The Angels can pitch!

What was so welcome to see about Reid Detmers’ no-hitter Tuesday night — besides his glee, of course — was that it was not some random interruption of another summer of pitching futility. It was a herald, a loud and joyful notice that October might finally return to the Angels’ schedule.

Mike Trout, healthy again, is the best player in baseball again. He leads the major leagues in OPS.

Shohei Ohtani is the most intriguing player in baseball, again. Jared Walsh is showing his All-Star season was no fluke. Taylor Ward has been a revelation. Brandon Marsh has more than held his own. Anthony Rendon batted left-handed Tuesday and hit a home run, and within him there is an All-Star right-handed batter waiting to break free.

The first-place Angels lead the majors in runs, home runs and OPS. They rank third in the American League in stolen bases.

The Angels can hit. There never has been a question mark about that. Even last season, when Trout was cooked in May and Rendon was done for the season on the Fourth of July, the Angels scored more runs than the mighty New York Yankees.

The Angels can pitch? They sure can, and not just Tuesday.

The no-hitter was the Angels’ sixth shutout of the young season, in 32 games. They lead the majors in shutouts.

In 2021, the Angels threw four shutouts, in 162 games. They ranked next-to-last in the majors.

The Angels selected Detmers out of Louisville with their first-round pick in the 2020 draft, with the thought that a polished college pitcher could get to Anaheim quickly. They selected nothing but pitchers in the 2021 draft, 20 rounds of arms in all.

They spent $93 million on the back end of the bullpen last offseason — closer Raisel Iglesias, plus proven relievers Aaron Loup, Ryan Tepera and Archie Bradley — and $21 million on the front end of the rotation, on Noah Syndergaard.

The Angels rank fifth in the AL in earned-run average, at 3.39. The last time the Angels finished in the top five in the AL in ERA? That would be 2011, the same year Trout made his major league debut at age 19.

Trout turns 31 this summer. As you might have heard a few million times, the Angels never have won a playoff game with him on their roster. They have played three, all in 2014, and lost them all.

“I think the drought has to come to an end,” Trout told The Times on the eve of the season opener. “Everybody is always saying, ‘The Angels have got to get to the playoffs.’ We do. That’s the priority.

“I say it every year. But the feeling I have this year is different.”

The Angels are 10 games over .500. They have not been 11 games over .500 since July 28, 2015, after a game in which the top three spots in the batting order were manned by Johnny Giovatella, Conor Gillaspie and Kole Calhoun.

On Tuesday, the top three spots were manned by Marsh, Trout and Ohtani.

Is there really a chance at the playoffs? The Angels are not deep, and no one on their pitching staff besides Ohtani threw even 100 innings last season.

Yet this season is more than a month old, and Baseball Prospectus and Fangraphs each give the Angels about an 80% chance of October baseball.

There are six postseason spots in the AL. As of Wednesday, seven teams have winning records.

Trout cannot get them there by himself. Heaven knows he has tried. An Angel in the outfield is good. Many good Angels on the mound are better.

Denial of responsibility! NewsUpdate is an automatic aggregator around the global media. All the content are available free on Internet. We have just arranged it in one platform for educational purpose only. In each content, the hyperlink to the primary source is specified. All trademarks belong to their rightful owners, all materials to their authors. If you are the owner of the content and do not want us to publish your materials on our website, please contact us by email – [email protected]. The content will be deleted within 24 hours.
AngelsBaseballbest sports newsDetmersnews update sportsnewsupdateNoHitterOutlier