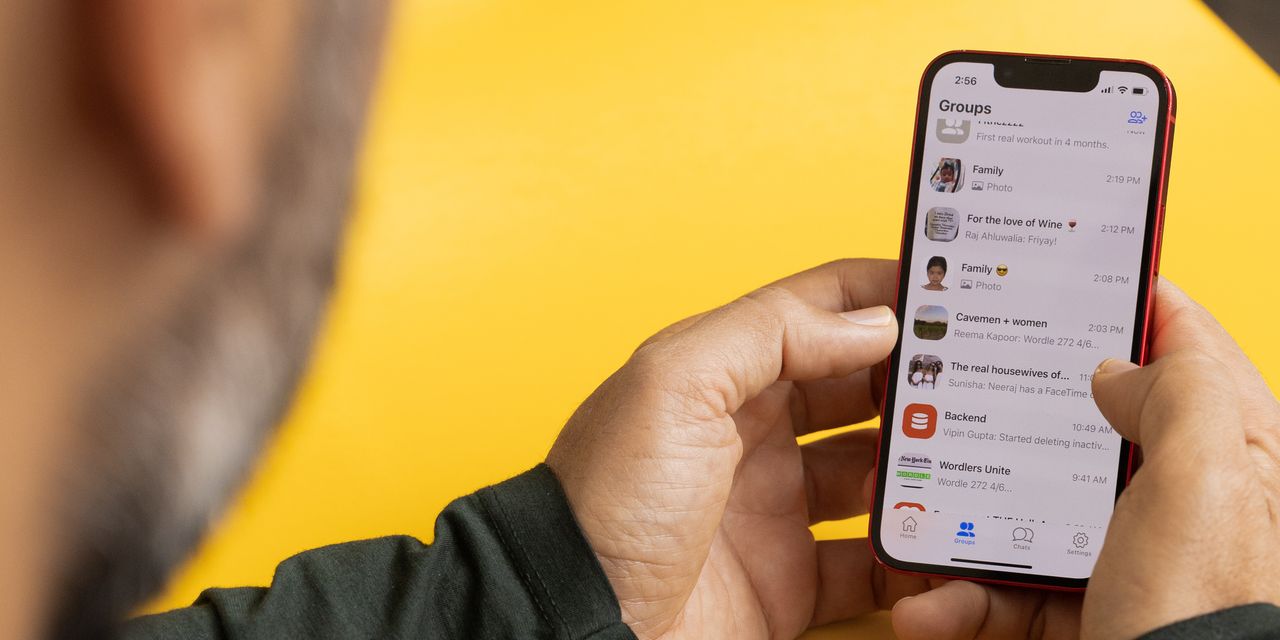 isn’t the only entrepreneur with big ideas about how to fix social media.

A growing number of startups are emerging to challenge the status quo. Many of them are rooted in their founders’ experiences within the industry’s leading giant,

Nearly a decade ago, then-WhatsApp executive

helped negotiate the $22 billion sale of the messaging startup to Facebook, in one of the largest technology deals in history.

But once at Facebook, Mr. Arora says he soured on the company’s reliance on online advertising and saw its leadership as overly fixated on competition and rapid growth rather than improving core products. “They didn’t build with the user in mind,” said Mr. Arora, who left in 2018, the same year as WhatsApp’s founders.

Now Mr. Arora and Michael Donohue, also formerly of WhatsApp, are tackling social media once again, with their two-year-old startup HalloApp. This time, however, Messrs. Arora and Donohue say they aren’t focused on maximizing how much time people spend on their app or prodding users to expand their online networks to the greatest possible size in order to attract advertisers.

Instead of ads, HalloApp plans to charge subscription fees, likely a dollar or two and less than $5 a month. Groups inside the app are capped at 50 people. “You don’t want to lose the plot by growing too quickly,” Mr. Arora said in one of several recent interviews.

HalloApp—which has raised $15 million from investors including Sequoia Capital, former Facebook board director

and others—is one of several startups that are aiming to solve the problems of social media. Yet how to define those problems is subject to intense debate.

Some startups say product design should be considered as much as the content decisions that generate more headlines. At HalloApp, they believe capping the size of groups will help minimize the potential for abuse. Right-leaning platforms like Parler and Truth Social argue that people need fewer content rules so as to speak freely to the masses without worrying about censorship. Other companies argue for a combination of stronger content policies and design choices so that online political discussions become more civil.

Last month, the world’s richest man, Mr. Musk, waded into the fray and offered to buy

for $44 billion, in part so he could relax its content rules and promote free speech.

This competitive pressure comes as

confronts an unprecedented series of challenges. Its advertising business is taking a beating after

limited its ability to collect data and the stock price has fallen sharply this year. Meta is also under investigation for allegedly violating antitrust laws—scrutiny that could inhibit the company’s ability to acquire smaller rivals, a tactic it has deployed successfully in the past.

“We’ve always faced stiff competition and that’s a good thing. It forces us to innovate, create better experiences for people, and focus on making the best products in the world,” a spokesman for Meta said.

He said the company is investing heavily in so-called community messaging, building tools that make it easier to connect with small groups of family and friends, similar to what some of the startup services are touting.

Any company tackling social media today faces steep challenges breaking into an industry that hasn’t produced a bootstrapped success story in years. The hot app of the moment, TikTok, is supported with significant investment from its Chinese owner, ByteDance Ltd.

But many of those trying to reimagine social media today say their small size is exactly the point. They say they aren’t trying to compete head-on with Facebook’s breadth of features and its global reach.

“The era of a few big winners is ending,” said Eli Pariser, co-director of New Public, a nonprofit trying to create online spaces to foster healthy conversations. “Consumer tastes are changing. The one-size-fits-all approach—they’re seeing how much that’s breaking down.”

Mr. Pariser said the nonprofit’s model is built on the premise that people are more likely to hold each other accountable in smaller, more intimate forums and become more familiar with different views. The new co-director of his initiative to tackle this problem is Deepti Doshi, who spent seven years at Facebook.

Many of those founders who came from Facebook now say they believe the company’s size came to be a liability. Some are removing growth-friendly features like friending or following that have long been the bread-and-butter of mainstream social-media sites.

“I think scale is problem number one,” said Rob Ennals, a former product manager at Facebook, where he tried to make public conversations on the platform less toxic and divisive. “All these things fall apart when things get too big. We haven’t really worked out the right way to design at scale.”

In online spaces, including Facebook, groups are often dominated by the most prolific members, who post so much that it drowns out the quieter, more moderate voices, Mr. Ennals says.

Mr. Ennals, who left Facebook in 2018, has since created a service called Talkwell to overhaul the way public debates take place online. On Talkwell, which is still in testing, a user’s posts are organized behind their user icon, no matter how often they post. This design, theoretically, makes it hard for any one individual to take over a discussion. “You don’t miss the quiet people,” Mr. Ennals said.

What do you think of HalloApp’s approach to social media? Join the conversation below.

Other sites are removing common features because they can be easily abused. Somewhere Good, a platform for audio discussion that launched last month, doesn’t allow users to send each other direct messages or follow or friend each other to minimize abuse and social comparison. “It was important to think about a person from the most marginalized community and how they could use this product,” Somewhere Good founder Naj Austin said.

Users who violate the rules must talk to a “conflict coordinator” and read documents about why their behavior was problematic before they can post again. These moves are intended to “lay a foundation for users and set a different expectation” for how users should behave online, Ms. Austin said.

Central to HalloApp’s appeal is its lack of reliance on advertising, its founders say. Users can only connect with people in their address book. Posts disappear after 30 days. Messages are encrypted by default.

HalloApp’s design won’t stop “your crazy uncle from sharing disinformation,” Mr. Donohue said, but because the networks are smaller than Facebook and it is harder to share, he believes the effects will be minimized.

In 2018, WhatsApp was implicated in violent attacks in India, a fact that took Mr. Arora and other executives by surprise. The events prompted the service to put a cap on how often information can be forwarded and how large WhatsApp groups can be.

Those events and others, he says, have created a different climate around technology and social media today. “Even five years ago, if you had asked me about disinformation, I would have said, ‘Are you stupid? Who cares about these things?’” Mr. Arora said. “We’re building on a different planet.”

Denial of responsibility! NewsUpdate is an automatic aggregator around the global media. All the content are available free on Internet. We have just arranged it in one platform for educational purpose only. In each content, the hyperlink to the primary source is specified. All trademarks belong to their rightful owners, all materials to their authors. If you are the owner of the content and do not want us to publish your materials on our website, please contact us by email – [email protected]. The content will be deleted within 24 hours.
aimApplications Softwarebest technology newsC&E Industry News FilterCommunications SoftwarecomputersComputers/Consumer Electronicscomputing

Thomas Cup: All the players have gone crazy, slept with…

Explained: Heatwave, its signs, symptoms and measures for…

Dodgers vs. Arizona Diamondbacks: How to watch, stream and…

Three Google features Apple should borrow for its next big…