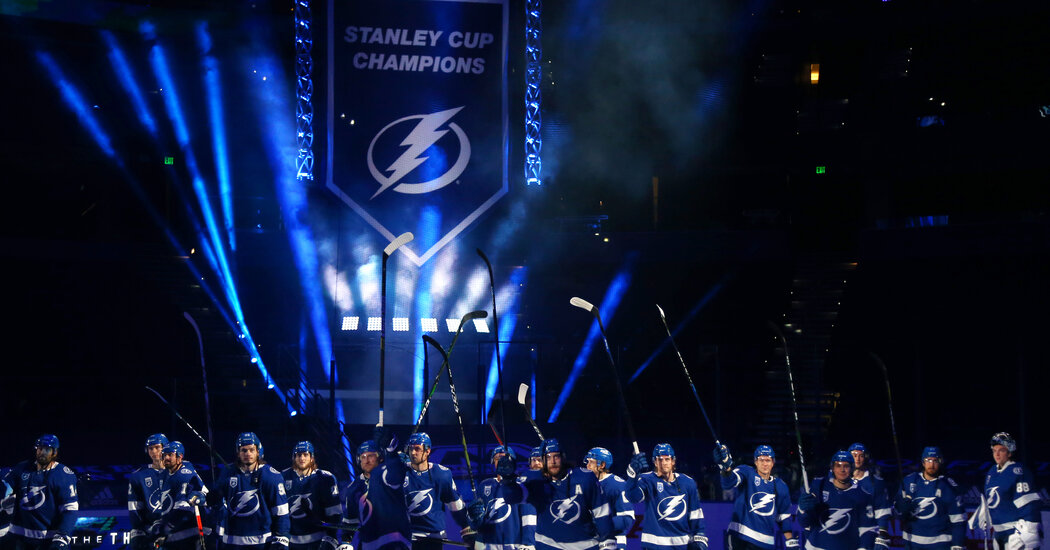 You hear a lot of superlatives about the N.H.L. playoffs. Does hockey have the most exciting playoffs? Is the Stanley Cup the hardest trophy to win in sports? Are its customs and traditions the most mythic and profound?

Let’s answer some questions about the N.H.L. playoffs as they get set to begin.

When do the playoffs start?

Saturday at 7:15 p.m. Eastern when the Boston Bruins play the Washington Capitals. Because teams are finishing their schedules as much as 10 days apart, the league has staggered the playoff starts as well. On Sunday, a series between the Pittsburgh Penguins and the Islanders begins at noon, the Vegas Golden Knights play the Minnesota Wild at 3 p.m., and the Tampa Bay Lightning play the Florida Panthers at 7:30 p.m. The Nashville Predators and Carolina Hurricanes open their series on Monday at 8 p.m., as do the Colorado Avalanche and St. Louis Blues, at 10 p.m. The Edmonton Oilers and Winnipeg Jets play their first game at 9 p.m. on Wednesday, and the Toronto Maple Leafs and Montreal Canadiens open their series on Thursday at 7:30 p.m. A full first-round schedule can be found here.

How do the playoffs work?

Last season, the N.H.L. opened the doors of its playoffs to 24 teams, but this season it is returning to a 16-team format. The top four teams from each of the league’s four divisions will qualify, with the top seed playing the fourth seed and number two playing number three in the first round.

After a second round of divisional play, the four survivors will meet up in the Cup semifinals and then the finals. All four rounds of the playoffs are best of seven games. The team with the better regular-season record in each series gets the advantage of playing four of the seven games at home.

What channels are the games on and how can I stream them?

Games will be shown in the U.S. on NBC, NBCSN, CNBC, USA and NHL Network. This is the final season of NBC’s deal; games will be moving to ESPN next season. Streaming is available on NBCSports.com and the NBC Sports App.

In Canada, Sportsnet, CBC, and the French-language channel TVA Sports will broadcast the games. Sportsnet NOW and CBC will stream the games.

Wasn’t the regular season kind of weird this year?

The season was played out over 56 games, rather than the usual 82. It also started late, and the playoffs are a month late as well. A few teams wrapped up their regular seasons as scheduled on May 8. Because of various pandemic-related postponements during the regular season, others will play into the coming week.

The Vancouver Canucks, who had 22 players test positive last month, and the Calgary Flames have fallen so far behind that they will play a regular season series against each other that runs through May 19.

Because of Canada-United States border restrictions, an all-Canadian division was created. To minimize travel in general, all games this season were played against teams within the divisions. No team has met a team outside its division all year.

Will Canadian teams finally meet American teams in the playoffs?

One Canadian team will make the final four along with three American teams, so yes. But it is not yet clear where the games in that series will be played.

Who are the big names?

Connor McDavid of the Edmonton Oilers will surely be selected the regular season M.V.P. after scoring 105 points in 56 games. Auston Matthews of the Maple Leafs is the league’s leading goal scorer. Along with those early 20-somethings, there’s the 33-year-old dean of the league Sidney Crosby, still playing extraordinarily well for the Cup contending Pittsburgh Penguins.

Will there be fans at the games?

It will vary by city. Some teams have been allowing a limited number of fans at games, ranging up to 25 percent capacity. Other teams, including all the Canadian teams, have not, so far.

What if I just want to watch the Stanley Cup final?

Because of the uncertainty of the other rounds, it is not clear when precisely the finals will start. In a typical season they begin about seven to eight weeks after the playoffs start.

Which team is going to win?

Like every year, that’s difficult to say. It is not uncommon for lower seeds to win playoff series: In the last normal playoffs, in 2019, five of eight lower seeds won in the first round, and that hardly seemed surprising. This year is even harder to forecast because we can’t really judge the relative strength of the divisions since they never played against each other.

The Colorado Avalanche won the Presidents’ Trophy for the top record in the league. But the trophy winner hasn’t won the Stanley Cup since 2013, and only four times this century.

The defending champion is the Tampa Bay Lightning, but the Penguins are the only repeat winner of this century in 2016 and 2017.

As of now, the Golden Knights, Lightning and Colorado Avalanche are the betting favorites, with the Maple Leafs and Hurricanes not far behind. But their odds range from 5-1 to 8-1, so no one is a heavy favorite.

Actually no. Although about 45 percent of the league’s players are Canadian, and interest in the sport is feverish there, no team from that country has won since the Montreal Canadiens in 1993.

I think I know who is going to win. Can I bet on hockey?

It depends on where you live. An increasing number of states have legalized sports betting, and it has been legal for years in many countries around the world.

While hockey isn’t the most popular sports for betting, it does have a loyal following, and just about any North American bookmaker, and many European ones, will happily take your bets on it.

What’s so special about the Stanley Cup?

Its history, for one. The Cup has been awarded to the N.H.L. champion since 1927. But its history dates to 1893. In the early days, it was open to teams from other leagues as well. So its champions have included the likes of the Montreal Shamrocks, the Vancouver Millionaires, the Toronto St. Patricks and the Seattle Metropolitans, the first American team to win it, in 1917. It has it’s own keeper named Phil Pritchard and travels extensively. Players who win it put their babies in it, let their dogs drink from it, and even sleep with it. And those are the stories we can print. The Stanley Cup has had a lot of adventures.

Who was ‘Stanley’ anyway?

Sir Frederick Arthur Stanley was the governor general of Canada 130 years ago. And in truth, he was something of a nonentity. He would long since have been lost to history were it not for one thing: He ponied up 10 guineas for a trophy in 1892.

So is it really the hardest trophy to win in professional sports?

That’s impossible to answer, of course. Winning four consecutive seven-game series is very difficult, but teams have to do it in the N.B.A. as well. And a host of other championships — the World Cup? the N.C.A.A basketball title? the Vince Lombardi Trophy? — are very challenging to win. It’s really in the eye of the beholder.

What’s with all the beards?

Many N.H.L. players superstitiously do not shave for as long as their team is in the playoffs. (Some teams in other sports, like baseball, have embraced this tradition as well.)

That means by the time of the Stanley Cup Finals, players may look like they should be competing in a lumberjack championship instead. The Islanders (actually team president Lou Lamoriello) have a rule barring facial hair, but it is waived for the playoffs; the team has qualified this year, freeing its players to take up the hirsute look.

And the handshakes after the games?

Traditionally, after a playoff series has concluded, teams line up to shake their opponents’ hands. Despite the pandemic, the handshakes continued beginning in the first round last season. It’s a custom much beloved by hockey fans: Expect to hear an announcer call it “a marvelous tradition.”

I haven’t watched hockey all year. Why should I start now?

There’s something about playoff hockey. Unlike in the regular season, overtime is not called to a halt after five minutes; they just keep playing until someone scores. That could mean one, two, three, four overtimes. Just last season, the Lightning and Columbus Blue Jackets went to a fifth overtime.

Overtimes in Game 7s — with both teams knowing a goal will instantly eliminate or advance them — are by consensus one of the most exciting things in sports.

With the stakes higher, there tends to be less fighting in the playoffs. You probably already know if this is a plus or minus for you.

What is the Conn Smythe Trophy?

The M.V.P. award of the playoffs. While the winner almost always comes from the Cup winning team, it actually is awarded based on performance over the entire playoffs, not just the Cup finals.

Among the immortals who have won it are Bobby Orr, Guy Lafleur, Wayne Gretzky, Mario Lemieux, Patrick Roy and Sidney Crosby.

I’m already looking ahead. Will N.H.L. players be at the Beijing Olympics in 2022?

They are expected to. N.H.L. pros started playing in the Games in 1998, but skipped the 2018 Olympics because owners did not want to disrupt their regular season. A collective bargaining agreement signed last year opens the possibility of players returning for 2022 and 2026. Maybe the only thing better than Game 7 in the Stanley Cup final is a gold medal game between Canada and the United States. Like this one. And this one. For now, back to the N.H.L. playoffs.

Denial of responsibility! NewsUpdate is an automatic aggregator around the global media. All the content are available free on Internet. We have just arranged it in one platform for educational purpose only. In each content, the hyperlink to the primary source is specified. All trademarks belong to their rightful owners, all materials to their authors. If you are the owner of the content and do not want us to publish your materials on our website, please contact us by email – [email protected]. The content will be deleted within 24 hours.
best sports newsnews update sportsnewsupdateNHLPlayoffssports newssports updateUnderway