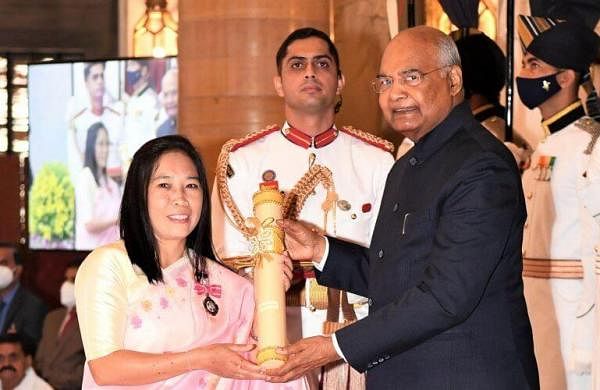 CHENNAI: Oinam Bembem Devi needs no introduction. At a time when support for football was sparse, Bembem carved a successful career, shining for over two decades in the national team. And that has not gone unnoticed as she was recently handed the Padma Shri, the fourth-highest civilian honour. She hung up her boots in 2016, but her love affair with the sport continues. Donning the coach’s hat off late, she is looking to inspire many to follow in her footsteps in the years to come.

“I have said that I’m willing to sacrifice for football and do more. I’m ready to do anything to help lift women’s football in the country. It’s not like I’ll rest after this award. I want to help youngsters to win Arjuna and Padma Shri awards like me. I want to share my experience and motivate them,” Bembem, the first female footballer from the country to win the Padma Shri, said in a virtual interaction on Friday when asked how the coveted award could inflate the expectation levels from her side.

Like most athletes from the Northeast, Bembem, a crafty midfielder who played 85 matches for the national team, had her fair share of hardships. Coming from a humble background in Imphal, getting the basic facilities in itself was an everyday struggle for her during her salad days. Moreover, she also had to convince her father to take up the sport as he wanted her to pursue education. And yet, she persisted, dribbling alongside boys in her hometown, before breaking into the national team. Things have improved over the years and Bembem is glad to see this transformation.

“For the last five years or so during my playing career, we were getting the facilities that are available now. But before that it was difficult. We didn’t have a physio, we didn’t have proper kits. We used to travel by bus/train. Now, there are a lot of changes. And we wouldn’t get many exposure trips. Now, even the Indian Women’s League (IWL) has been introduced, women’s football has made good progress,” the former India skipper, who has also represented an overseas club, noted.

The ‘changes’ that Bembem notes are evident. The national team will be competing against heavyweights Brazil in Manaus on November 25. They’ll also be facing Chile and Venezuela. These matches have been conducted bearing in mind the AFC Women’s Asian Cup, to be held in India, next year. “Playing against Brazil and Chile, their confidence will rise. When I was playing in 1997, we travelled to Germany. We lost against them but I still gained a lot of confidence. So, when you’re up against a strong team, the confidence level will automatically rise,” the 41-year-old said.

Progress is visible but the women’s team still have miles to go in order to be competitive at the elite level. Bembem urged all the stakeholders — sponsors and clubs — to support the youngsters. “All the stakeholders in the sport should also come forward and encourage women. A lot of them have financial issues and they don’t get paid well. Football rules, be it men or women, are the same. When they take part in IWL and they get meagre sums like Rs 20,000, Rs 50,000, Rs 60,000… that’s not enough, they need support to build their career. It will be beneficial if we can have more tournaments for women.”

Denial of responsibility! NewsUpdate is an automatic aggregator around the global media. All the content are available free on Internet. We have just arranged it in one platform for educational purpose only. In each content, the hyperlink to the primary source is specified. All trademarks belong to their rightful owners, all materials to their authors. If you are the owner of the content and do not want us to publish your materials on our website, please contact us by email – [email protected]. The content will be deleted within 24 hours.
ArjunaBembembest sports newsDeviinspirenews update sportsnewsupdateOinam Bembem Devi

Rivalry means everything when USA and Mexico meet, even if World Cup qualifying is at stake