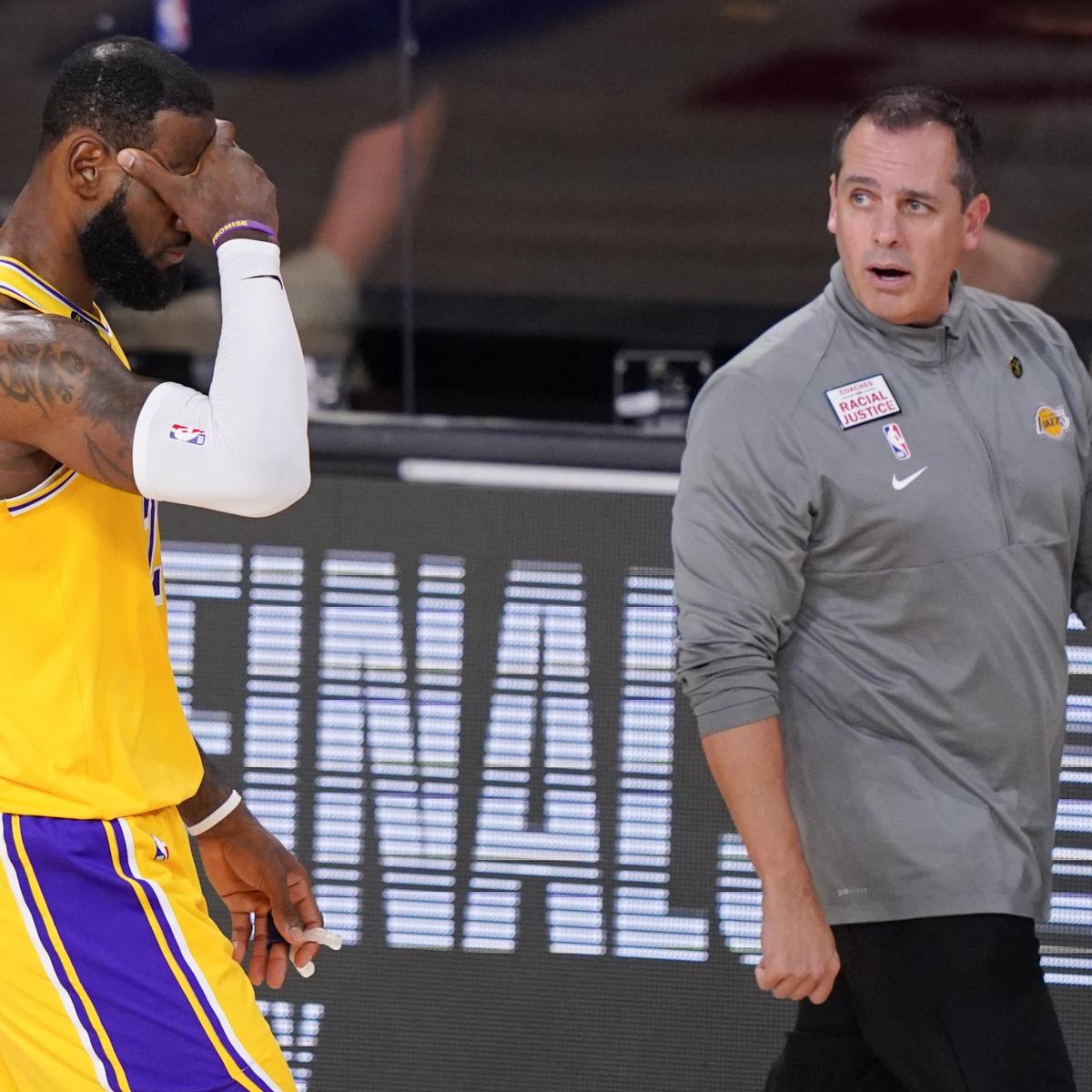 What the Lakers Should Actually Be Worried About

After the Los Angeles Lakers had squandered a 26-point lead to the Oklahoma City Thunder, guard Malik Monk air-balled a step-back three-pointer down three with 12.4 seconds remaining. The inexperienced, winless Thunder immediately gave the Lakers another attempt, throwing the ball to Carmelo Anthony on the inbound. The 10-time All-Star, who couldn’t have been more wide-open and had plenty of time to shoot, rushed a three for the Lakers’ second consecutive air ball.

The 123-115 loss Wednesday was flat-out embarrassing. Oklahoma City outscored Los Angeles 104-74 over the final three quarters. This is a Thunder squad that hadn’t scored 104 points in 48 minutes all season yet somehow managed the feat in 36 against the Lakers’ porous defense.

“this might be the worst Lakers loss ive seen.”

“send em back on the Greyhound”

James Worthy goes in on the Lakers to lead the postgame show after their embarrassing meltdown in OKC https://t.co/3X6JUE4ubk

The final sequence that dropped the Lakers to 2-3 was comically bad, but that’s not why the team lost to the Thunder.

Yes, the Lakers were playing without LeBron James (ankle). The game was the second night of a back-to-back on the road. They didn’t have Trevor Ariza (ankle), Talen Horton-Tucker (thumb), Kendrick Nunn (knee) or Wayne Ellington (hamstring). It’s just a single loss on the schedule. The season isn’t over because the Lakers have lost three of their first five.

But the collapse to the Thunder shouldn’t have been surprising the way the Lakers have played defense this season. They’re just not very good yet. Defense, above all, is the team’s primary issue moving forward, one they must address if they have an earnest hope of chasing another title.

Should DeAndre Jordan start at center? This is a hotly debated topic among Lakers fans, and while the “no” side seems to be the entire fanbase, it’s still continuously discussed on social media. On Wednesday, Jordan played 13 minutes, and the Lakers outscored the Thunder by two points while he was on the floor. L.A. isn’t losing games in the first six or seven minutes of each half—the Lakers are struggling to get stops pretty consistently, with or without Jordan.

Is Russell Westbrook a terrible fit alongside James? He might be, and his two best performances as a Laker were with James sidelined. Still, the Lakers are confident that Westbrook will learn to blend in successfully with James over time.

Does Westbrook play too fast? Yes, yes, he does. This isn’t a new issue. He played too fast when he won the NBA’s Most Valuable Player Award in 2017.

Is the Lakers offense a mess? Debatable, given the team scores 116 points per game, second in the Western Conference to just the Memphis Grizzlies’ 116.5. If the Lakers could manage that pace without giving up a league-worst 119.6, they’d win most nights.

Are injuries killing the Lakers? This is valid. Westbrook, in theory, should help L.A. get through games without James, but keep in mind the Lakers have played their last couple of games with only two players signed to contracts above the league minimum (Anthony Davis and Westbrook).

Are the Lakers too old? Maybe, but two of the three Lakers out for a lengthy period (Horton-Tucker and Nunn) are young. Age could prove to be a problem for the franchise throughout the season, but it’s far too early to make that call.

Per NBA.com, when the Lakers won the title in 2019-20, the team had the third-best defensive rating in the league at 106.1 points allowed per 100 possessions. Despite playing the 2020-21 season without James and Davis for extended periods because of injury, Los Angeles finished first overall with a 106.8 defensive rating.

The early results for 2021-22 are a stunning reversal. The Lakers are 25th overall at 111.4. It’s why they could be winless had Ja Morant of the Grizzlies and Jakob Poeltl of the San Antonio Spurs hit a few more free throws.

The Lakers are struggling to get stops consistently. The issues above are real, most notably health. The team needs James back urgently, and also a veteran defender like Ariza. Without him, the Lakers are relatively small, with Kent Bazemore (6’4″) and rookie Austin Reaves (6’5″) the tallest perimeter defenders coach Frank Vogel has available (outside of two-way forward Sekou Doumbouya, 6’8″, currently with the South Bay Lakers).

Anthony is 6’7″, but he’s never been accused of being a robust defensive presence. Ariza is clearly missed, and while he’s 36 years old, the 6’8″ forward logged 28 minutes per game last year with the Miami Heat. He’s not expected back until December after ankle surgery, but once healthy, he should be able to contribute at least half that figure nightly for the Lakers. That’s about what Rajon Rondo (17.5 minutes per game), Dwight Howard (14.2), Jordan (13.2) and Avery Bradley (12.0) are contributing on average.

Getting Horton-Tucker and Nunn back should also help. Before the season, Vogel told the Lakeshow podcast (h/t Silver Screen and Roll) that he challenged Horton-Tucker to “step up and fill into that role of guarding some of the other best players” after the loss of perimeter defenders Kentavious Caldwell-Pope and Alex Caruso.

Perhaps he will, but he’s not available. In the meantime, the Lakers are asking for Bazemore, Monk and Anthony to be the team’s big-minute role players. Only Bazemore comes in with a solid reputation as a defender. Monk and Anthony are both dynamic offensively, but they may not have the chops to make the Lakers a viable team defensively. Monk, at just 23, may still have some potential, but right now, the Lakers are bleeding points nightly.

Reaves, who plays 19.5 minutes per game, has quickly become a fan favorite because of his clear effort defensively. The undrafted guard may or may not be the next Caruso, but asking him to save the Lakers defensively is a lot to put on a rookie who has four official NBA games on his resume.

Meanwhile, Caruso is already the mayor of Chicago, averaging 3.3 steals in 27.5 minutes per game for the 4-0 Bulls. The Lakers chose not to keep one of the better defenders in the league, primarily because his four-year, $37 million contract with Chicago could have meant some $25-35 million in luxury taxes for the Lakers this season.

They feel the loss on the court, but just five games in, it’s not time to panic.

On the other end of the spectrum, the Miami Heat (3-1) have the league’s best defensive rating at 92.0. Based on the league-wide numbers the last decade, they’re not going to be able to keep that up. Give the season some time to breathe.

Additionally, the Lakers have almost a brand-new team outside of James, Davis and Horton-Tucker. While Howard, Rondo and Bradley were a part of the 2019-20 championship squad, the current group is going through some growing pains as they learn to play together.

The Lakers have plenty of scorers, but getting points isn’t the problem. The eye test says something isn’t right yet with the team, but Vogel is one of the top defensive coaches in the league. Given some time and a healthy roster, he’ll find combinations to stabilize the team.

It will take longer than Lakers fans expect, but NBA championships are won in June, not October. The Lakers have a lot of time to figure it out, provided they prioritize fixing the defense.

Denial of responsibility! NewsUpdate is an automatic aggregator around the global media. All the content are available free on Internet. We have just arranged it in one platform for educational purpose only. In each content, the hyperlink to the primary source is specified. All trademarks belong to their rightful owners, all materials to their authors. If you are the owner of the content and do not want us to publish your materials on our website, please contact us by email – [email protected]. The content will be deleted within 24 hours.
best sports newsLakersnews update sportsnewsupdatesports newssports updateworried