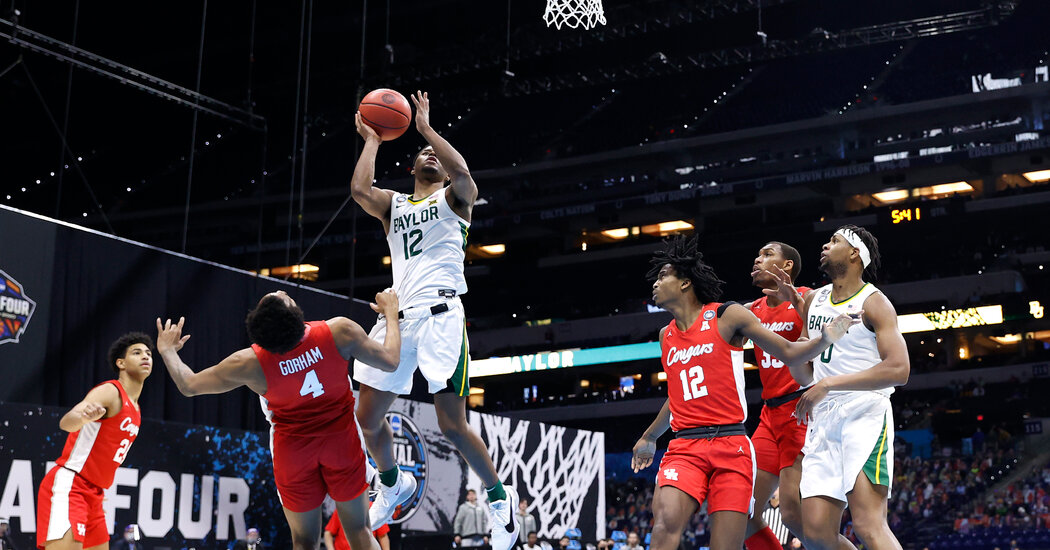 What to Watch For as Gonzaga Plays Baylor for the N.C.A.A. Men’s Title

Baylor knocked out its thoroughly overwhelmed opponent in the Final Four and cruised into the N.C.A.A. men’s championship game. Gonzaga was forced into overtime by a feisty, never-say-die underdog and needed a banked-in 3-pointer as time expired to remain undefeated and advance to the title game.

Exactly four months after they were supposed to meet in what was billed as a possible appetizer for the N.C.A.A. men’s final, Baylor and Gonzaga will settle things once and for all on Monday night at Lucas Oil Stadium in Indianapolis. The Bulldogs (31-0) have been made a 5-point favorite over the Bears (27-2) by sports books.

Gonzaga is seeking to become the first men’s team to finish unbeaten since Bob Knight’s Indiana club went 32-0 on the way to the 1976 national championship. The Bulldogs are also seeking their first N.C.A.A. title, though they have had plenty of deep tournament runs. They lost in the 2017 title game to a North Carolina team coached by Roy Williams, who announced his retirement on Friday and had three titles in his career.

Coach Scott Drew and Baylor are also seeking their program’s first national championship. The Bears are appearing in the title game for the first time since 1948.

“Amazing, we’ve worked hard through this struggle of a season but we stayed together,” guard Jalen Suggs, a Gonzaga freshman, said in a television interview after draining the game-winning shot in a 93-90 victory over U.C.L.A. late Saturday night.

“I can’t put this one into words, turning dreams into reality and now we get ready for Baylor,” Suggs said. “They’re a tough team.”

Even though Gonzaga has not lost since Feb. 22, 2020, against Brigham Young, the Bears have history on their side. This is just the fifth time since the Associated Press Top 25 preseason poll began in the early 1960s that the teams ranked No. 1 (Gonzaga) and No. 2 (Baylor) will meet in the title game. Each of the previous four games were won by the team ranked second: Cincinnati over Ohio State in 1962, U.C.L.A. over Michigan in 1965, UConn over Duke in 1999 and Duke over Arizona in 2001.

Led by Drew Timme’s 25 points, Gonzaga put up 56 points in the paint against U.C.L.A., and the Bears will have to have an answer for that. Baylor is led by experienced guards and wings, and its frontcourt players Mark Vital and Flo Thamba are solid if not spectacular.

Baylor is led by an all-American junior guard, Jared Butler, who had 17 points in the semifinal rout of Houston, and another junior guard, Davion Mitchell, who dished out 12 assists with 11 points as the Bears won, 78-59. After last year’s tournament was canceled because of the coronavirus pandemic, both Butler and the senior guard MaCio Teague tested the N.B.A. draft waters but opted to come back for another shot at the title.

“That was one of my goals, and I know some of my teammates’ goals, just to leave a legacy at Baylor, create Baylor as a blue blood,” Butler said.

The last undefeated team to make the title game had Larry Bird on it.

Bird averaged 28.6 points, 14.9 rebounds and 5.5 assists a game during his junior season after averaging 30 points as a sophomore and nearly 33 as a freshman. In the national semifinal against DePaul, he made 16 of 19 field-goal attempts and had 16 rebounds and nine assists as Indiana State won, 76-74.

Michigan State featured not only Johnson, then a sophomore, but also Greg Kelser, a 6-foot-7 forward who was later chosen in the first round of the N.B.A. draft.

“We felt that our zone could affect them,” Johnson said on CBS before the semifinal games. “We double-teamed Larry every chance we got and we were able to pull off the victory,” 75-64.

Johnson, like many others in the basketball world, was hoping for a Gonzaga-Baylor final entering the Final Four.

“Gonzaga is such a well-balanced team, they can shoot from the outside, they got great inside players,” he said. “And that’s what we say with Baylor, they were dominant inside as well as outside.

“The best two teams in college basketball were Baylor and Gonzaga all season long.”

Only one player in the last decade has won an N.C.A.A. championship and gone on to become the No. 1 pick over all: Kentucky’s Anthony Davis in 2012.

The Oklahoma State freshman point guard Cade Cunningham and the Southern California freshman 7-footer Evan Mobley are expected to be among the top picks along with Suggs, with many mock drafts projecting Cunningham at No. 1.

But Brian Sandifer, the director of the Grassroots Sizzle program for which Suggs played, believes the Minnesota native deserves to be the top pick in part because of his history of winning. As a quarterback for Minnehaha Academy, Suggs’s team went 25-1 and appeared in two state championships, winning one. He was recruited by Ohio State and Notre Dame, among others, to play football.

“Jalen Suggs is the best player in the draft, period,” Sandifer said in a phone interview. “I’ve never wavered from that. If you watch how they play and you do the résumé checks on all the kids, Jalen Suggs has won at every level that he’s played, football, basketball, whatever.”

Denial of responsibility! NewsUpdate is an automatic aggregator around the global media. All the content are available free on Internet. We have just arranged it in one platform for educational purpose only. In each content, the hyperlink to the primary source is specified. All trademarks belong to their rightful owners, all materials to their authors. If you are the owner of the content and do not want us to publish your materials on our website, please contact us by email – [email protected]. The content will be deleted within 24 hours.
Baylorbest sports newsGonzagaMensNCAAnews update sportsnewsupdatePlays