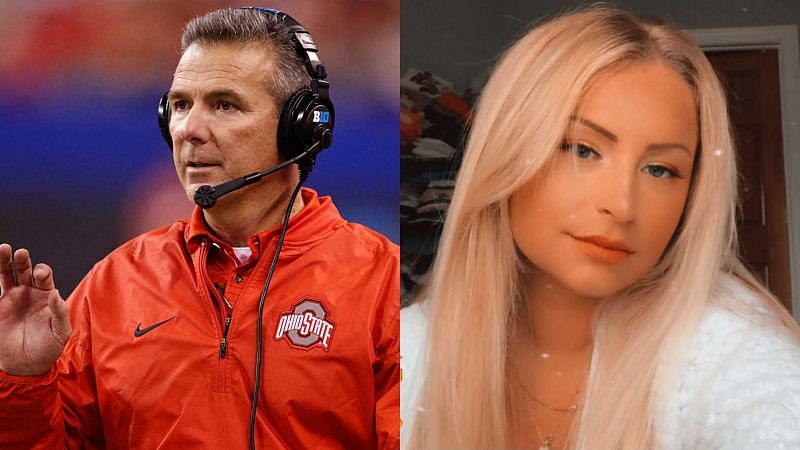 Who’s the girl with Urban Meyer in viral dancing video? All about Cayman Nebraska

Urban Meyer has been making news for all the wrong reasons. The Jacksonville Jaguars head coach came under fire after a video of him dancing with an unidentified woman went viral online.

The controversial video left social media users disappointed as they considered Meyer’s behavior inappropriate, specifically after being married to Shelley Mather since 1986. Following the incident, the NFL coach issued a public apology.

However, the clip continued to make the rounds online and internet sleuths reportedly identified the mystery woman in the video as Cayman Nebraska. Several people also alleged that she already knew Urban Meyer.

Who is Cayman Nebraska?

Cayman Nebraska is a 24-year-old woman from Ohio. According to her Instagram bio, she is based in Columbus and is an alumnus of Ohio State University. As per USA Today, she currently works at New Horizon Media Group, an Ohio-based marketing company.

The marketing professional recently garnered negative attention on social media after her viral video of dancing at a bar with Urban Meyer appeared online. Her mother reportedly told the outlet that the controversial incident was ruining Cayman’s life:

“(She) can’t even go anywhere. It’s ruining her life is what it’s doing. I’m worried for her emotional status right now.”

Urban Meyer mentioned in his apology that the incident took place during a sudden encounter with Cayman at the restaurant where he went for a family dinner.

However, an old social media post showed that the latter was present at Urban Meyer’s Chophouse with her team for a photoshoot in June.

New Horizon Media Group spokesperson Brian Duncan also confirmed the shooting but said the company was not aware of any prior relationship between Cayman and Meyer. He informed USA Today that the company is also carrying out an internal investigation into the situation:

“We’ve had no prior issues with her whatsoever. She’s been a very solid asset to the company. We’re going to undertake our internal investigation to determine what, if any, impact this has on the company and we’ll proceed accordingly.”

Urban Meyer and Cayman Nebraska have been subject to severe criticism on social media after a controversial video of the duo dancing at a bar was released online. The former faced immense criticism due to his actions while the latter was recently identified by the online community.

The clip was recorded when the NFL coach went out for a family dinner in Ohio. The 57-year-old stayed back in his hometown after last week’s Jaguars vs. Bengals match to meet his grandchildren.

However, he found himself in the middle of a controversy for his inappropriate conduct at the bar.

Here’s #Jaguars HC Urban Meyer apologizing for what happened over the weekend. Meyer didn’t travel back with the team after the game and stayed in Ohio. Full explanation:

Here’s #Jaguars HC Urban Meyer apologizing for what happened over the weekend. Meyer didn’t travel back with the team after the game and stayed in Ohio. Full explanation:
https://t.co/X8plCNWbiQ

The football personality later explained the situation in a public statement:

“I stayed to see the grandkids, and we all went to dinner that night at the restaurant. There was a big group next to our restaurant and they wanted me to come over and take pictures and I did. They were trying to pull me out on the dance floor… I should have left.”

He also expressed remorse for disappointing his team and asked for forgiveness:

“I just apologized to the team and the staff for being a distraction. It was stupid. I explained everything that happened and owned it, and, you know, just stupid, should not have had myself in that kind of position.”

Meanwhile, Jacksonville Jaguars owner Shahid Khan also stated that Meyer’s actions were “inexcusable”. He mentioned that the coach will have to work to regain his respect and trust in the future.

In addition to the Cayman Nebraska controversy, Urban Meyer was previously called out for hiring controversial strength coach Chris Doyle for the team. He has also failed to impress fans as the new Jaguars head coach with four consecutive losses in the ongoing NFL season.

Denial of responsibility! NewsUpdate is an automatic aggregator around the global media. All the content are available free on Internet. We have just arranged it in one platform for educational purpose only. In each content, the hyperlink to the primary source is specified. All trademarks belong to their rightful owners, all materials to their authors. If you are the owner of the content and do not want us to publish your materials on our website, please contact us by email – [email protected]. The content will be deleted within 24 hours.
best sports newsCaymanDancingfeatureGirlMeyerNebraskanews update sports

What is the ‘Dry Scooping’ trend on TikTok? Doctors issue warning after influencer suffers heart attack

Namibia Coach: We didn’t come here to lie down, we…

Can Purton produce more Montaro mastery or will familiar…