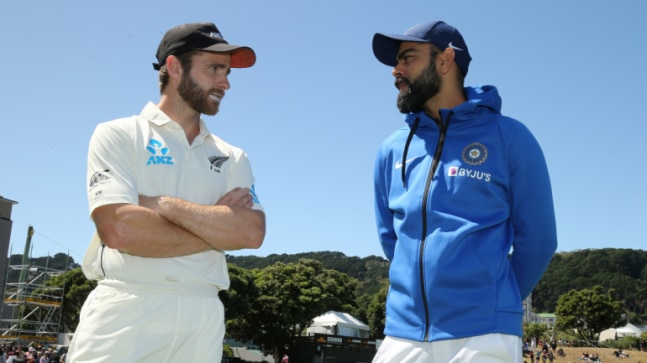 India’s last match in an ICC tournament was also against Kane Williamson-led New Zealand when they lost the semi-final of the 2019 World Cup by 18 runs.

India face New Zealand in the final of the World Test Championship at the Ageas Bowl in Southampton from June 18 to 22. Incidentally, India’s last match in an International Cricket Council (ICC) tournament was also against New Zealand, when they lost the semi-final of the 2019 World Cup.

India last won an ICC tournament in 2013, when MS Dhoni-led them to victory in the Champions Trophy. In the five tournaments, they have played since India were knocked out in the semi-finals four times and finished runners-up in the 2017 Champions Trophy.

India faced a star-studded South African team in the semi-finals of the 2014 T20 World Cup and it was a Virat Kohli classic that helped them chase down a target of 173. They then faced Sri Lanka, who were looking to give a victorious send-off to legendary former captains Mahela Jayawardene and Kumar Sangakkara, both making their last appearance in a T20I. Sangakkara fittingly led the team to the title with an unbeaten 52 off 35 balls.

Rohit Sharma’s 137 helped India thrash Bangladesh by 109 runs in the quarter-finals. Their tournament ended in the next stage where they faced hosts and eventual champions Australia. Steve Smith’s 105 helped Australia to 328/7 and in reply, India were all out for 233.

Kohli’s 89 off 47 balls helped hosts India to 192/2 against the West Indies in the semi-final. The dismissals of Chris Gayle and Marlon Samuels within the first three overs made it look like India would stroll to the final. However, the West Indies turned it around with Lendl Simmons ending the match unbeaten on 82. He put up a partnership of 97 off 62 balls with Johnson Charles and 80 off 42 balls with Andre Russell to lead them to the final, where Carlos Brathwaite made Ben Stokes and England remember his name and win the West Indies’ second T20 World Cup title.

India, who were now being led by Kohli, were the runaway favourites to win the 2017 Champions Trophy in which they faced arch-rivals Pakistan, who were the rank underdogs in the tournament and fell to a meek 124-run defeat in the previous match between the two sides. However, Pakistan hit a purple patch after that game and never looked back. In the final, opener Fakhar Zaman’s 114 helped them score 338/4 batting first after which fast bowler Mohammad Amir ran through India’s mighty top order of Shikhar Dhawan, Rohit and Kohli within the first nine overs. Hardik Pandya gave India hope with a 43-ball 76 but his run-out marked the end of India’s challenge as they folded for 158.

The 2019 World Cup semi-final between India and New Zealand turned out to be a two-day affair due to rain at Old Trafford. Bhuvneshwar Kumar led the way with figures of 3/43 as India restricted New Zealand to 239/8. However, India were then reduced to 92/6 in the 31st over. Ravindra Jadeja wrested India back into the game with a 116-run partnership for the seventh wicket with Dhoni that came in just 104 balls. Jadeja was on 77 off 59 balls when he fell to Trent Boult and it was down to Dhoni to turn back the clock and finish the chase. It was not to be as he was run out by inches on 50 off 72 balls, thus walking back to the pavilion one last time in an India shirt.

Denial of responsibility! NewsUpdate is an automatic aggregator around the global media. All the content are available free on Internet. We have just arranged it in one platform for educational purpose only. In each content, the hyperlink to the primary source is specified. All trademarks belong to their rightful owners, all materials to their authors. If you are the owner of the content and do not want us to publish your materials on our website, please contact us by email – [email protected]. The content will be deleted within 24 hours.
8Yearbest sports newsChampionshipdroughtfinalICCIndianews update sports